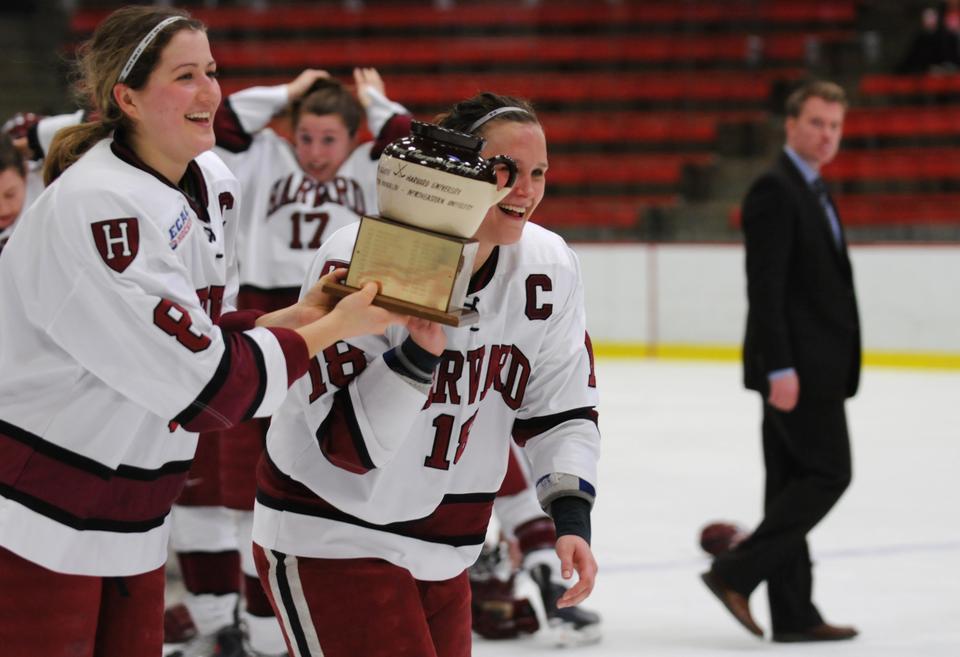 The postseason is well underway in Division I women’s hockey, with the semifinals and finals of each of the five conference tournaments scheduled for this weekend. By Sunday night, the eight berths to the NCAA tournament will be decided. But with a lot of high-level hockey still left to play, The Back Page gives you a preview of what that championship field is looking like.

The three WCHA titans—the only three teams to have ever won an NCAA championship—along with last year’s national runner-up Cornell and Frozen Four host Mercyhurst are absolute locks for the tournament, no matter what happens in conference tournaments this weekend. Barring a major upset in the WCHA tournament, Wisconsin should have the top seed safely in hand. Its 32-2-2 record is the best in the country, with the only blemishes coming at the hands of Minnesota and Minnesota-Duluth. The Badgers have distanced themselves from the Big Red, which has lost a bit of momentum in the last few weeks with a tie at Clarkson, a loss at Dartmouth, and a scare from eighth-seeded Rensselaer in the opening game of the ECAC quarterfinals.

Hockey East’s top two schools should both be safely into the tournament at this point, although BU’s stock has fallen a bit thanks to a pedestrian 4-3-1 record in February, mainly coinciding with the absence of freshman star Marie-Philip Poulin due to injury. The Terriers draw Northeastern in the Hockey East semifinals—the two teams skated to a tie in the Beanpot consolation final—and though a loss may hurt BU’s seeding, its impressive regular-season resume should be enough to carry it into the tournament. Meanwhile, BC has had a slightly better month, including a win over the Terriers in the Beanpot. If the Eagles slip up against Providence in the semifinals, things could get interesting, but a pair of wins over BU, plus wins over bubble teams Providence, Dartmouth, and Harvard, should be enough to push BC in regardless.

The Fighting Sioux and the Big Green, ranked No. 8 and No. 9 in the latest USCHO.com poll, are in essentially the same situation—both teams were seriously tested in their quarterfinal series, ultimately prevailing over Bemidji State and Clarkson, respectively, in overtime of the deciding third game. That doesn’t necessarily inspire confidence in either program, but both also carry some signature wins—Dartmouth upended Cornell in the last weekend of the regular season, while North Dakota has two wins over Minnesota-Duluth, three over Minnesota, and one over BU. Both teams will be underdogs heading into the conference semifinals—the Big Green visits a playoff-tested Harvard squad, and the Fighting Sioux must get by top-ranked Wisconsin—but one of the two is likely to grab the last at-large spot.

Harvard looked the sharpest out of any of the four remaining teams in the ECAC tournament last weekend, outscoring St. Lawrence, 14-4, in a two-game sweep. The Crimson has played good hockey of late, keeping games with Cornell and BC close, and it swept Dartmouth in the teams’ regular-season match-ups. Harvard likely needs the auto-bid given to the ECAC tournament champion to break into the NCAA field, but with some upsets in the other conference tournaments, it has a small chance at the last at-large bid.

With neither BU nor BC looking unbeatable at this point, Providence has a good chance to shake things up in the Hockey East tournament this weekend. The squad will likely need to win the conference tournament to get into the NCAA field, but in one of the more evenly-balanced conferences in the country, that’s a definite possibility.

Any of these six teams need to win their conference tournaments to get into the tournament, and none of the six have a particularly good shot at it. Quinnipiac would have to take down both Cornell and the winner of the Harvard/Dartmouth game on the road to get the ECAC crown; Northeastern’s 6-10-5 Hockey East record doesn’t bode well for its chances against the league’s top three squads; and Mercyhurst was a perfect 16-0-0 in CHA play this season.