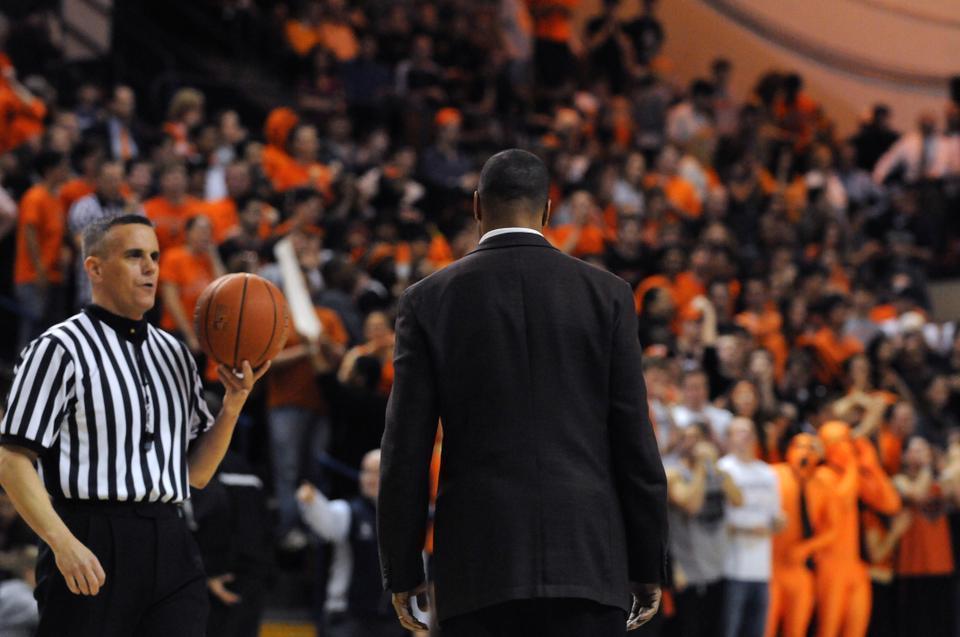 Immediately after Princeton hit the shot the first thing our point guard, Oliver McNally, did was drop to the floor to avoid the Princeton fans coming in from the stands. He ducked his head down towards them the way you do when a wave is coming at you, or if you’re a ball-carrier playing football and somebody bigger than you is heading your way; but when no one made direct contact with him—he wasn’t the main source of attraction—he fell out of balance to the floor, and then he lay there, and then he got up.

Before their games start the Harvard team forms two lines, for when the starters’ names are called, except one non-starter, a tall skinny boy whose name I can’t recall now. He stands at the edge of the lines, facing both. When Kyle Casey’s name, for example, is called, Casey takes a few bouncing steps towards the tall skinny boy and then they bump chests and engage in a quick series of handshakes and parallel motions. Everyone’s is different, but Kyle Casey’s ends with a salute. The tall skinny boy gives him the salute back and then folds back into his original position.

There is a Harvard student standing next to me who seems to know everything about the game and the things around it. That the man in the suit sitting in between the Princeton and Harvard student sections is, for example, ESPN’s own Jeremy Schaap, of the Jeremy Schaap show on ESPN. “EEEE SSSSS P NNNNN,’” he quotes. “You know what I’m talking about, right?” He is the one who jinxes the game singlehandedly, by starting to gather his belongings when Harvard is up by one with 2.8 seconds left, when he turns to us and asks on which side we should plan to storm the court. Later, a girl standing near us will say, “I hate things like that.”