Co-captain Oliver McNally was initially hesitant to come to Harvard. But the guard bought into Tommy Amaker’s long-term vision and three years later forms the heart of his coach’s squad 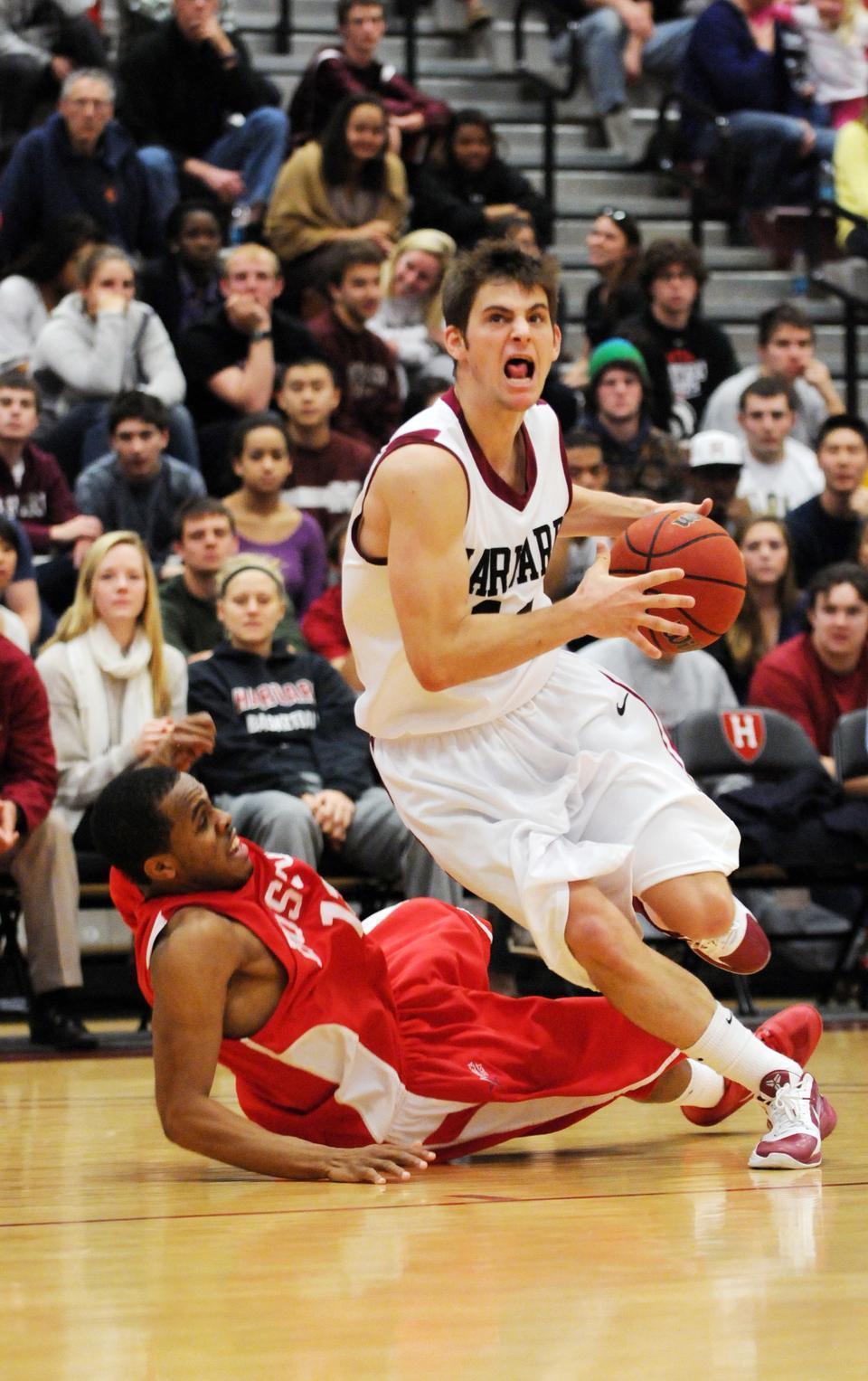 Co-captain guard Oliver McNally has every intention on taking his team to the NCAA Tournament.
By Scott A. Sherman, Crimson Staff Writer

“Do you want to make history?”

One question. Just six words. But when Oliver McNally heard them, his life was changed forever.

They came from the mouth of first-year Harvard basketball coach Tommy Amaker in 2007, and they marked Amaker’s appeal to the San Francisco guard to come play for him in the Ancient Eight—something that McNally, up to that point, had never considered.

“I wasn’t really talking to any Ivy League schools,” McNally recalls. “I didn’t want to come out to the East Coast at all. I was talking to a lot of [West Coast Conference] and Big West schools; I was pretty set on being around California and staying close to home.”

But Amaker was able to convey a message that resonated with the guard.

“[He said, ‘Harvard’s] the most famous school in the world,’” McNally explains. “‘In a third world country, people know the name ‘Harvard.’ In every field, athletically and academically, things have been done. Football’s won, soccer’s won, but basketball never had. You can make history, people will remember you and the team you played on as doing something Harvard had never done before, and you can’t really do that in a lot of other fields here.’”

It wasn’t an easy decision for the high school senior, who had become accustomed to greatness with three consecutive Division V state championships, during which his teams posted a combined 129-12 record. McNally looked at the Crimson and saw a squad which had never won anything, a bottom-feeder in a league typically dominated by Princeton and Penn. The team had struggled to an 8-22 record in Amaker’s first season, and losing was one thing McNally wouldn’t accept.

“Something that was very important to him then was knowing how we were going to put a plan together to win here at Harvard,” Amaker recalls. “He’s a very competitive kid, so we knew right away that his value was critical for our team.”

The guard eventually agreed to take a chance and cross the country as Amaker’s first Crimson commitment. Three years later, the reward for that choice finally arrived in the form of Harvard’s first-ever Ivy League title.

“I bought into everything Coach said then, and I’ve bought into everything he’s said since,” McNally says. “It [was] tough putting your face into something, especially something that wasn’t doing so well … So to be a part of that transition is just really special, and to do it with a team that was extremely close to each other last year on and off the court was awesome.”

The junior played a key role on Harvard’s first-ever title team, averaging 10.1 points and 3.1 assists per game. He also shot 92.6 percent at the free-throw line, good for second in the nation (a number he admits he finds “pretty shocking”).

But to the guard who says he’s not a stats guy, more important was his role as a leader and co-captain on a youthful team that last year contained no seniors. The fact that it was his teammates—rather than his coaches—who chose him and forward Keith Wright as their captains made him consider the role an even greater honor. But with the distinction came increased responsibility.

“[Being a captain] means you have the respect of your teammates, but it’s also a burden,” McNally explains. “You can’t take practices off; you can’t take drills off; you have to set a tone for the rest of the team. … It’s something I take really seriously and something I’m really proud of.”

Initially hesitant to come to Harvard, McNally has already left a lasting mark on his team. CBS Sports college basketball analyst Jeff Goodman calls him “one of the best leaders in the country,” and many of his teammates consider him the heart and soul of the squad.

“Oliver is definitely our spirit, our energy, our vocal leader,” junior forward Kyle Casey says. “He’s just a fighter. He’s the ultimate competitor. He hates to lose [and] loves to win. You can see it in his style of play. ... That’s really what he brings us, that strong, steady spirit, day-in and day-out.”

Casey specifically recalls one home game last year against Brown when McNally sprained his ankle in the first half, and Harvard went into halftime behind by 24 in a key Ivy contest.

“Coach is talking to us in the locker room, and Oliver crutches in, and all we can hear is Oliver flipping out,” Casey says. “He really got on us and fired us up.”

The Crimson came back to win that game, completing the fourth-largest second-half comeback in NCAA history. It is in such moments of adversity McNally knows he most strongly needs to lead.

“There’s so many examples in practice when you don’t feel the energy in certain drills, or you know Coach Amaker is looking to have a great practice,” McNally says. “That’s something that falls on [the captains’] shoulders.”

In return, his coach always takes into account what his co-captain has to say.

“There’s no more important voice on our team than Oliver,” Amaker explains.

But before McNally could reach the peak of his collegiate career, he had to fight through some valleys too. He had been the team’s starting point guard alongside Jeremy Lin ’10 for most of his sophomore year, but after struggling early in the Ivy season, McNally was replaced in the starting lineup by then-freshman Brandyn Curry.

Instead of sulking at having lost his job to a rookie, McNally took the benching in stride and used it as motivation to get better.

Once the year was over and Lin had graduated, McNally had a chance to start again. But it wouldn’t be an easy transition, as he and Curry—two pass-first point guards—didn’t seem like the most natural backcourt pairing on paper.

“We didn’t really know what was going on,” McNally recalls. “The first time we started together, Coach Amaker just said, ‘Figure out what you guys are going to do.’ I deferred to Brandyn because I felt when the two of us were on the court, he was more valuable at the ‘one’ while I was at the ‘two.’”

Once again, McNally’s maturity helped the squad solve a problem, and last year, the pair of guards successfully shared a backcourt while each contributing something unique to the championship-winning team.

“We play extremely well together,” McNally says. “I take a lot of pride in my help-side defense, [while] he’s better on the ball. ... It’s worked well for us.”

The senior thus learned a lot from the setback of losing his starting spot and did so in a manner that has allowed him to thrive. But on March 5, McNally hit a nadir that will be more difficult to recover from.

With 2.8 seconds to go and his team up by one in the Ivy one-game playoff against Princeton, the co-captain was tasked with defending Tigers guard Doug Davis along the baseline near the Princeton basket.

The inbounds pass went to Davis, and McNally leaped in an attempt to block his shot. By the time he landed, he realized he had jumped too soon, falling for a pump fake that Davis followed with a game-winning jumper at the buzzer to send Princeton to the NCAA Tournament.

“[Playing in the tournament] is one of my dreams that I’ve had since I was a little kid,” McNally said. “I want to play in it one time before my time is up, and that was taken away from me.”

But McNally has refused to allow his teammates, or himself, to dwell on the loss or feel bad for themselves. Instead, he has once again used a challenge as motivation, setting big goals for the upcoming season.

“If you asked me four or five years ago, I wouldn’t have cared how we got [to the tournament],” McNally says. “But I want to win the Ivy title, and I don’t want to share it. That’s my number one goal right now.”

From becoming Amaker’s first commit and enduring a .500 freshman year when he played just 23 minutes per game, McNally’s road to the top has been a long one. Having seen the program transform before his eyes over the past four years, 2011’s championship is something the senior doesn’t want the team’s younger players to think came easily.

“Basically everybody here except for [senior] Andrew [Van Nest] and Keith and I have had a lot of success,” McNally says. “It’s a process; you can’t take the winning for granted. And it’s different having the bull’s-eye on us right now. It only means we have to work harder as a team.”

His coach couldn’t be more thankful that McNally bought into his message four years ago, and he knows the co-captain will be a major component on a team that this year hopes to dance for the first time since 1946.

“[His role] is invaluable,” Amaker says. “Without his heart and soul, we’re not where we’ve been in the past, and we’re certainly not where we want to go in the future.”

In McNally’s personal future—his long-term one, that is—he says he hopes to continue his career overseas when he graduates.

“I’m kind of leaning towards trying to see how long I can play basketball,” McNally says. “The quote I always hear is, ‘Make them take the jersey off your back.’”

Judging by Oliver McNally’s personal history, that task may be much tougher than it sounds.