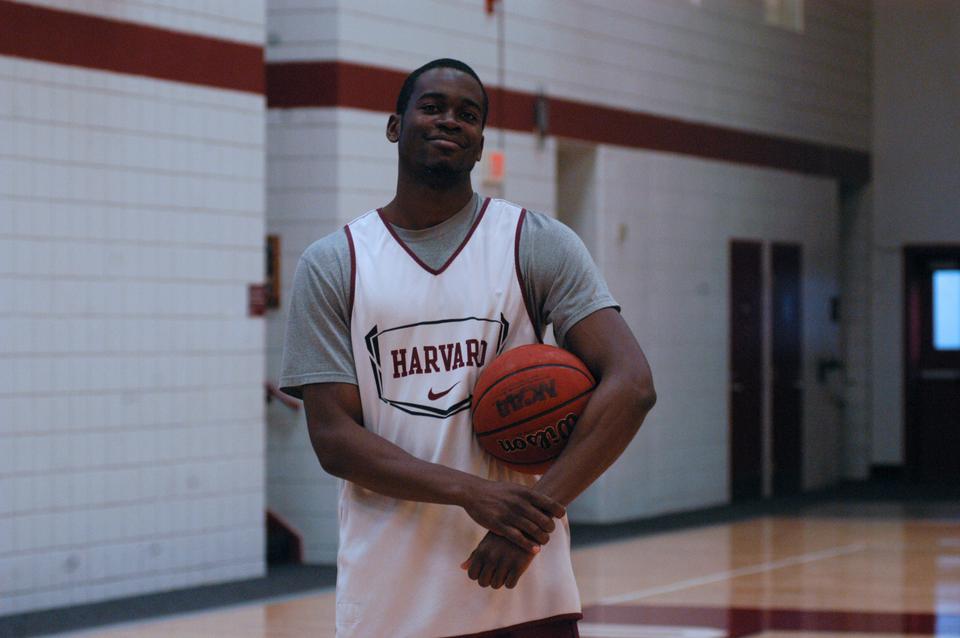 Freshman Steve Moundou-Missi could have a breakout rookie season for the Crimson.
By Dennis J. Zheng, Crimson Staff Writer

In what is rapidly turning into an annual tradition, Harvard coach Tommy Amaker has once again brought a fresh crop of highly touted rookies to Cambridge. But given that the Crimson lost no players to graduation, the league-best influx of talent could make for heavy competition for minutes among the members of the class of 2015. Regardless, Amaker will certainly appreciate his team’s added frontcourt depth along with a new arsenal at the wing positions. Highlighted below are five freshmen likely to make an immediate splash.

Holding scholarship offers from Utah, Brigham Young University, and Utah State, Miller instead chose to pack his bags and make a cross-country trek eastward after averaging 19 points per game in his final high school season. The guard, placed among the top five members of his class in the state of Utah by the Intermountain Hoops Scouting Service, has been quickly making a name for himself as a dead-eye shooter able to spread the floor for Harvard. “He’s a very high IQ player,” teammate Brandyn Curry says. “You can’t leave him open. I’d put him up there with [sophomore Laurent Rivard, who led the squad in three-pointers made as a rookie]. I’d like to see him and Laurent have a shoot-off. ... I wouldn’t be surprised if Corbin pulls off the upset.” Miller plans on embarking on a two-year mission trip for The Church of Jesus Christ of Latter-day Saints after his freshman season.

The Cameroonian native may not have arrived in Cambridge with as many accolades as his decorated classmates—Moundou-Missi’s ESPN.com score of 84 makes him the lowest rated of the five rookies listed here, and he is not even rated by Rivals.com—but the physical, athletic forward might in fact emerge as one of the most valuable members of his class by season’s end. “He’ll find ways to make an impact every game,” says CBSSports.com analyst Jeff Borzello, who ranked Moundou-Missi in the top 150 players from the high school class of 2011 nationwide. His strong showing in the Crimson Madness scrimmage last month, which included an emphatic put-back dunk, merely hinted at Moundou-Missi’s potential to shore up Harvard’s interior game. “He can just do it all ... He can dribble, he can shoot, he has nice post moves,” Curry says. “I call him the silent assassin. He’s a quiet kid, well-mannered, but on the basketball court, he’s another animal.”

A consensus national top-20 big man, Smith chose Harvard over offers from Northwestern and Vanderbilt in September of last year. The center, named a John R. Wooden High School Player of the Year after helping lead his Rebels to their first section championship, is the headliner of his class; Paul Biancardi of ESPN dubbed him the best incoming freshman in the Ancient Eight this season. “If Kenyatta Smith were a football player, he’d be a fullback,” Telep says of Smith, whose addition to the Crimson frontcourt should prove to be invaluable for Amaker’s rotation. “He’s going to be in the lane, at the rim, finishing chances. Carve a circle five feet around the basket, and he’s going to do his best to own it. ... Once he gets his feet under him and gets his conditioning down, he should be an excellent post player for Harvard for four years.”

In March earlier this year, Saunders led his Windward Wildcats to victory in the state’s Division IV championship game—a six-point win highlighted by his team-best 15 points, two of which came on a thunderous slam early in the fourth quarter. After claiming two consecutive state titles, Saunders is now poised to impose his presence on the collegiate level. “[He’s a] big, strong wing that, athletically, is difficult for some of the Ivy League schools to match up [with],” says ESPN.com director of recruiting Dave Telep says. “He’s got some inherent advantages just physically, even as a freshman.” The versatile Saunders, who turned down offers from USC, San Diego State, and Colorado to come to Harvard, was deemed a four-star prospect and the 88th-best overall prospect in the country by Rivals.com. “Wes’s game is very unique,” says Curry of Saunders, whose ability to attack the rim off the dribble and elevate is his main strength. “He doesn’t look like he’s going fast or going hard, but he’ll just, all of a sudden, explode for a dunk.”

The first of his class to pledge to Amaker and his staff, Travis finished his high school career with an 87 rating from ESPN.com and three stars from Rivals.com; Twin Cities Boys Hoops ranked him fourth in his year in the state of Minnesota. The hard-nosed combination forward—who said no to a long list of schools that included Cornell, Northwestern, and Boise State—should provide a key spark off the bench and could surprise many with his unique combination of athleticism and a relentless motor. “Jonah is an absolute monster,” Curry says. “I’ve never seen a player play like he does—just the way he’s constantly in attack mode. He’s one of the best rebounders I’ve ever seen.”