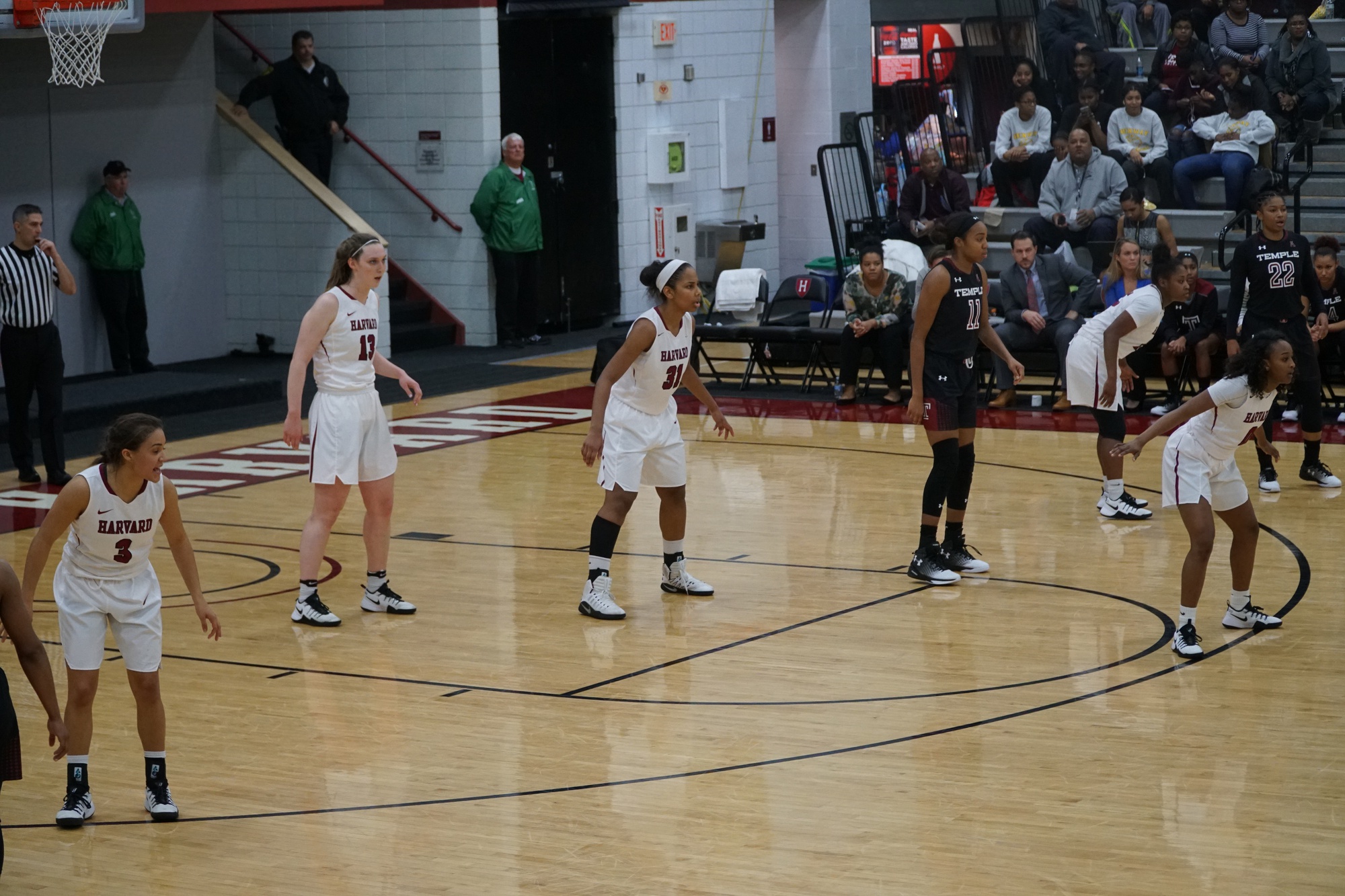 Despite a 14-1 record, the Harvard women's basketball team has received little recognition from the national media. By Ryosuke Takashima
By Manav Khandelwal, Crimson Staff Writer

You just can’t help but be impressed when you watch them play. There is quick ball movement, active defense, and an insatiable desire to find the open teammate. It’s an aesthetically pleasing brand of basketball.

On top of that, the Harvard women’s basketball team (14-1, 2-0 Ivy League) creates an atmosphere that its male counterpart may look to emulate. Big shots are greeted by raucous cheering and chest bumps. However, there is a sense that they’re playing solely for themselves, with the program generally lacking national attention.

With the regular season already more than halfway over, it would be criminal for anyone in the women’s basketball scene to ignore the Crimson. After an opening game loss at Minnesota with two freshmen starting their first collegiate game, the Ivy League heavyweight has overcome its youth and won 14 straight games to force its way into the national conversation.

Just this past week, Harvard received a lone vote in the AP Top 25 poll, the first it has garnered this season. The Crimson are also 30th in the RPI rankings, ahead of teams like Syracuse, Michigan, NC State, and Georgetown.

What does Harvard’s newest star, freshman point guard Katie Benzan, have to say about it?

“We haven’t even thought about [coverage],” Benzan said. “If we have national attention, that’s cool, but it doesn’t take away from the fact that we need to win the next game. We haven’t even reached our best yet, we aren’t even close, so we need to keep fighting, keep competing, keep working day-in and day-out.”

It is a mentality that has permeated the roster, but to see such focus from a player who has burst onto the scene the way that she has is remarkable. Through 15 collegiate games, Benzan leads the team with 12.7 points, 4.1 assists, and 2.7 three-pointers per game. She is the ninth-best most accurate three-point shooter in the nation, hitting 47.1% of her attempts.

Sophomore guards Nani Redford and Sydney Skinner are also capable of scoring in spurts, with junior forward Taylor Rooks providing key buckets off the bench. In fact, eight different players have scored at least 10 points in a game this season.

That balance has been on display in the biggest games of the season. The Crimson’s statement win, a 73-62 triumph over Temple, featured five players scoring in double figures. Boehm, expected to contribute heavily at the start of the year, only managed two points on 1-of-5 shooting but was dominant on defense, blocking two shots and holding Temple’s main scoring forward to 1-of-8 shooting. Nunley, as she did against La Salle, took over the contest with a game-high 21 points and allowed Boehm to focus on the other facets of her extremely versatile game.

Despite having the fourth-longest active winning streak in the country, behind Connecticut’s remarkable 92-game run, Harvard continues to lack the respect it deserves. Its strength of schedule rating is low despite matchups against Temple, La Salle, and Minnesota, but more harmful is its membership within the Ivy League. Two teams may have qualified for the tournament last year, but the conference still struggles to command respect on the national stage.

Harvard ranked fourth on ESPN’s most recent mid-major poll behind two teams comfortably behind it in terms of RPI. The team received zero votes in the most recent Coaches Poll. In ESPN’s most recent Bracketology, the Crimson was part of the “First Four Out,” with seven-loss Iowa placed in the projected field. Despite being 9-5 with a home loss to La Salle, a team Harvard beat on the road, Penn is still favored to win the Ivy League by pundits across the nation.

“The only way we’re going to get that respect is by beating the teams we’re supposed to beat by a larger margin,” Delaney-Smith suggests. “When the coaches do the polls, they ask, ‘Are you blowing teams out that you should blow out?’ That hurts us. We are unable to stretch the lead the way we should.”

Statistically, she’s right. Her team has only won two games by 15 points or more, while the Quakers have done it five times already. It is a primarily a function of Harvard’s youth, which involves four of the top five minute-getters being freshmen or sophomores.

That said, the polls and rankings aren’t properly valuing the team’s ability to grind out results. Even on off nights, the Crimson consistently finds ways to get it done. Upcoming Ivy tests will certainly put this team’s streak under the knife, but if there’s one thing to be learned from the team’s start, it’s not to underestimate this group.

Delaney-Smith, the winningest coach in Ancient Eight history, has seen some phenomenal squads during her tenure. She’s presided over the first two perfect seasons in Ivy League history. And yet, she wonders whether this may be the best team she’s had the privilege of coaching. It’s time for the rest of the country to take notice.

A previous version of this article incorrectly indicated that the Harvard women's basketball team holds the nation's second-longest winning streak. In fact, it is the fourth-longest.