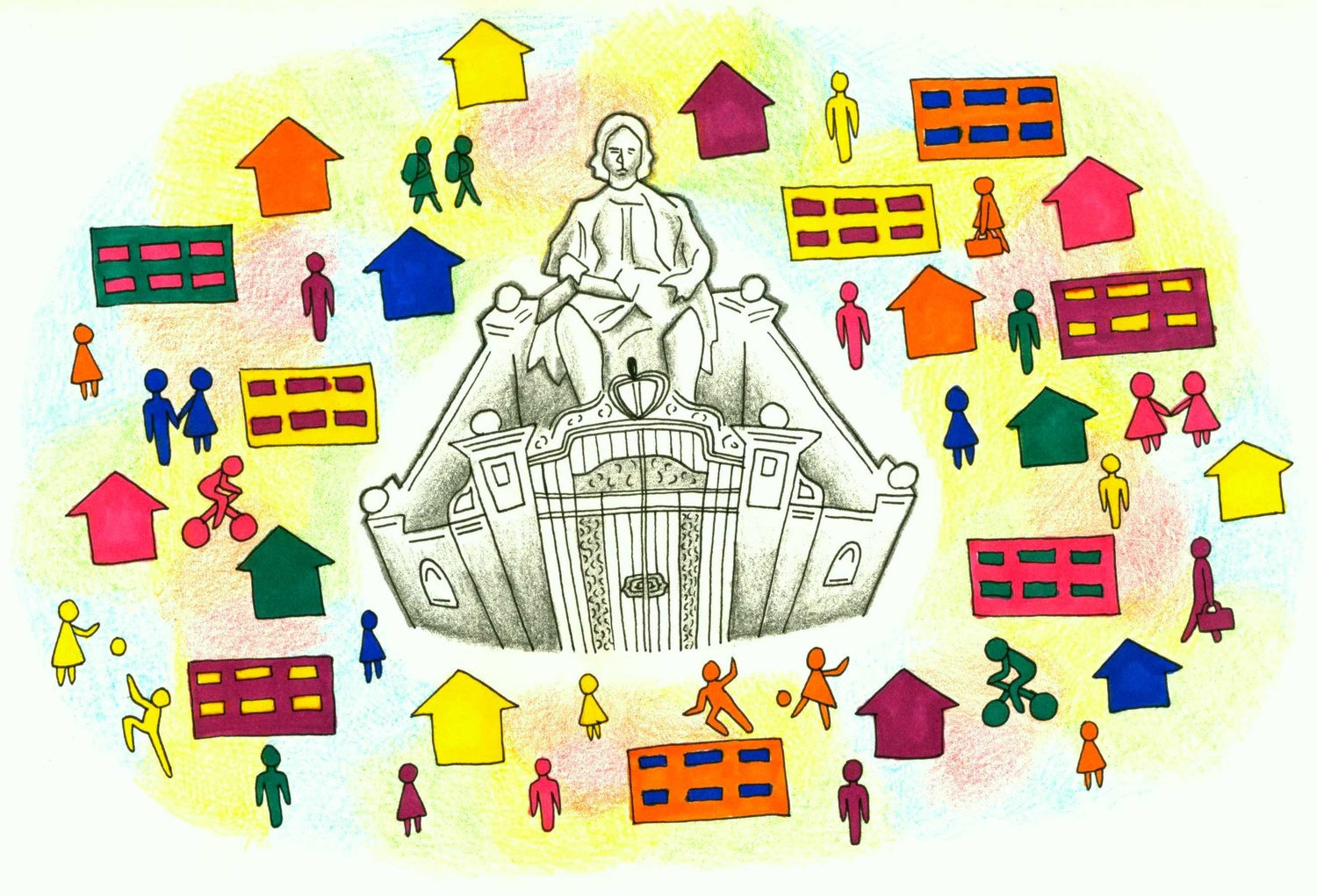 For the entirety of my college experience, I’ve eschewed the dramatic international destinations of my peers—Beijing, Barcelona, St. Barts. Instead, every chance I get, I go home to Baltimore.

I don’t get white sand beaches or a dramatic skyline featuring the tallest skyscrapers in the world. After landing at Baltimore-Washington International Airport, I drive by old factories with dark, broken-in windows and vacant houses. I look out the window at the Harbor, calm in the distance, and the blocky Baltimore Sun building, right by I-95. I’m home.

But not quite. My drive continues past the city, past the broken glass, into Baltimore County. I pull into a neighborhood where the average household income is six figures and the homes are pristine, with manicured lawns and the occasional backyard pool. Nestled between a forest, a park, and shiny new cookie cutter houses in the making, it’s picture-perfect suburbia. Every morning, the neighborhood is disturbed by a small army bearing brightly colored bookbags, lining up the sidewalk as parents peer out of minivans, watching their children board the elementary school bus.

Baltimore City may be 20 miles away from this bubble, but it defines me. Baltimore defines how I speak (and especially how my high school-aged brother, who sometimes has to translate his slang for me, speaks). Baltimore defines what I eat, the jokes I make, the music I listen to. Baltimore is home to some of my favorite restaurants and favorite memories, including multiple experiences of getting lost in narrow streets with friends (one time at night). Baltimore’s museums and aquariums were my first field trips and first explorations. Baltimore is where I’m from.

And so, here at Harvard, I defend it in a way I’ve never had to. Unlike other cities, I say, Baltimore is relevant. It’s critical to this nation’s history: it was one of the most important ports in the nation and was the site of the battle that inspired the Star-Spangled Banner. It is home to one of the best universities and hospital systems in America. It has given birth or shelter to America’s greatest thinkers, including Edgar Allan Poe, W.E.B. Du Bois, F. Scott Fitzgerald, Thurgood Marshall, and John Rawls. (I bet more than half those names surprise you.) Even today, the tradition of excellence continues, from Ta-Nehisi Coates to Oprah to Michael Phelps. (Yes, even Oprah has a Baltimore connection.)

But my friends in Cambridge all give me the same look. They know Baltimore’s reputation. And so do I. Because it is also a city with a history of race riots and corrupt policing. It is a city with segregated housing, where one of four residents live in what can be described as a “food desert.” It is a city with public schools so underfunded that earlier this winter, students sat shivering in classrooms. It is a city that the Economist labeled “exceptionally murderous” and USA Today named “the nation’s most dangerous,” due to the homicide rate, which is the highest in America.

Though Baltimore County isn’t perfect (except when it comes to college basketball), it is an ivory tower in comparison. And I mean this quite literally—65 percent of the county is white, while a nearly identical percentage of the city is black. That dichotomy is impossible to ignore, as it shapes how those in the county dehumanize and degrade the city, even while they benefit from it and appropriate its culture. More so than physical miles, this socio-political dichotomy is the distance.

Distance exists here at Harvard too, where I am living in an ivory tower once again. One step outside of the intricate gates and weighty prestige and towering history of Harvard Yard reveals to me the broken sidewalks and present poverty and flawed reality of Cambridge. Cambridge, too, is a city that suffers from a lack of affordable housing and that has a rising homeless population, a city that lacks the pristine shine of its more privileged neighbors.

Even though the distance between me and the rest of Cambridge is simply a few feet, the gap feels just as wide as the miles that separate my house from Baltimore City. While my peers and I benefit from the culture of the Baltimore, we are warned away from it. We dehumanize its residents, equate it to a warzone, treat it with disgust. While my peers and I benefit from restaurants and malls and public libraries in Cambridge, we are warned away. We avert our eyes as we rush past the homeless in Harvard Square. We never explore the streets or rivers of Cambridge. Some of us never even ride the train, whose station is prominent right outside of Harvard Yard.

Instead, for too many of us, it’s easier to hop in an Uber and head to Logan Airport for an exotic vacation on the other side of the world than it is to walk down to Central Square to actually see and understand the city we live in. We came to college wanting to see the world and change it for the better. Yet upon arrival, we immediately depart, traveling thousands of miles looking for what is right under our noses.

My cities are vibrant and real and brimming with so much potential. They aren’t ivory—they’re black and brown, and that’s even better. They aren’t pristine—they are cracked and broken in some places. But they are filled with nooks and crannies worth exploring. They are filled with people who want change and who work towards improvement. Many of these people are Harvard students, and you I commend and admire and join.

I have a lifetime of home in Baltimore. I still have two years left here in Cambridge. And though I can’t move out of my ivory tower, I am determined to step out from time to time.

Shireen Younus ’20, a Crimson Editorial Comp Director, is a Government concentrator in Pforzheimer House. Her column appears on alternate Thursdays.