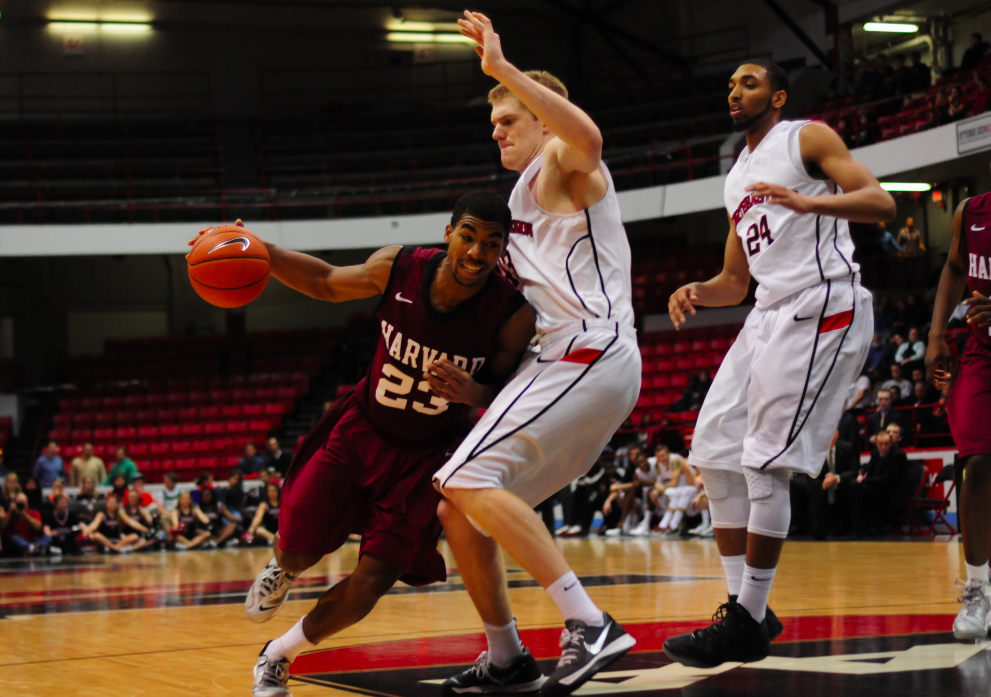 It’s easy fall into clichés, looking down at your notes after a game and seeing a surfeit of platitudes and truisms stuck between play descriptions. You realize that you paired two different coast-to-coast layups with banalities such as “Not only did he take the ball one from baseline to the other, but he also led his team from start to finish”—the stock phrases that make you shudder when you spot them on sports pages.

It’s easy for your hands to hover, frozen, over your notebook, forgetting to jot down what happened on a play as you attempt, instead, to mentally comprehend how that player made it from the corner to the basket in just one seemingly lazy, careless dribble.

And, finally, it’s easy to finish a graf and realize that you’d already written a very similar sentiment—in just as many words—in a previous gamer, about the same player.

This is the challenge that has presented itself to those who have covered Harvard basketball this year—while the success of Harvard hoops may no longer be a novelty, the nearly unprecedented Ivy League success of senior wing Wesley Saunders has made us continually search for the right words to describe him, his play, and his plays.

The reason why it’s so difficult to find these words may simply be that they just don’t exist in the Ancient Eight basketball lexicon as of yet—and if such language has been employed to describe a player in the past, it frames the athlete as an anomaly, an ultra-agile misfit amidst the more routine Ancient Eight competition. Take Jeremy Lin ’10, for example, who was formerly listed as a “sensation” and “magic[al]” in these same pages.

The thing is, it really shouldn’t be this way. We shouldn’t have to stretch ourselves to find words that convey the shock we see at a particularly athletic dunk or acrobatic layup from Saunders. We should be used to this by now.

Two years ago, we wrote that he had come into his own: after averaging 3.3 points per game as a freshman, he found a new level, averaging 16.2 his sophomore year. He led a No. 14 seed with just two upperclassman rotation players to its first-ever NCAA Tournament win, outplaying future NBA first-round pick Tony Snell along the way.

He upped the bar the following year, winning Ivy League Player of the Year and taking Harvard to the brink of the Sweet Sixteen. Yet, something about his play that still surprises us, even when he has performed at this level for so long—even when he is “just Wes.”

While Saunders did not win Ivy League Player of the Year this year, his performance this year has been as strong, if not stronger, than a year ago. He was third in the league in scoring, second in assists (by 0.1 a game), first in steals, fifth in shooting percentage, and third in minutes.

His performance last Saturday in the Ivy League’s one-game playoff was indicative of the type of dominance he’s shown all year. Down five to Yale with 15 minutes to go, Saunders had three-straight three-point plays—propelling his team back into the game, into the lead, and into control. The Crimson trailed only once following his personal 9-0 run, and—you guessed it—a Saunders basket regained Harvard’s advantage just 20 seconds later.

Going into Thursday night’s Tournament matchup with No. 4-seeded North Carolina, all eyes will be on Saunders. NBA scouts, who’ve been parked at Lavietes Pavilion all year, want to see if his conference heroics transfer to the biggest stage—if he is as effective when his opponent is donning Tar Heel, not Bulldog, blue.

History tells us that he won’t shy away from the moment. The wing has led Harvard in scoring in three out of the four March Madness contests that he has started. He had 18 points—on 5-of-8 shooting—against No. 3-seeded New Mexico two years ago, 12 points against Cincinnati in 2014, and 22 points against perennial powerhouse Michigan State in last year’s Round of 32. In the de facto elimination game Saturday, he led all scorers with 22.

Not that North Carolina will make it easy. The Tar Heels are known for their length, making it harder for the senior to skip his way into the paint as he is wont to do. UNC is dominant on the boards, which will make it more difficult for him to have the success on the offensive glass that’s a staple of his game. Tar Heels coach Roy Williams will watch the tape from UVA’s rout of Harvard, noting that when defenders don’t bite on his pump fakes, Saunders struggles to get good shots up.

The odds are against Saunders and the Crimson going into this matchup. There’s no doubt about that. Various metrics and sportsbooks will tell you that UNC has the advantage, and the talking heads that deemed Harvard a “trendy upset pick” heading into the 2014 NCAA Tournament have shied away from the Crimson in the days before this year’s Big Dance. But the thing is, Saunders has always found a way to surprise those who follow the team. Even when we should be accustomed to his performances by now.