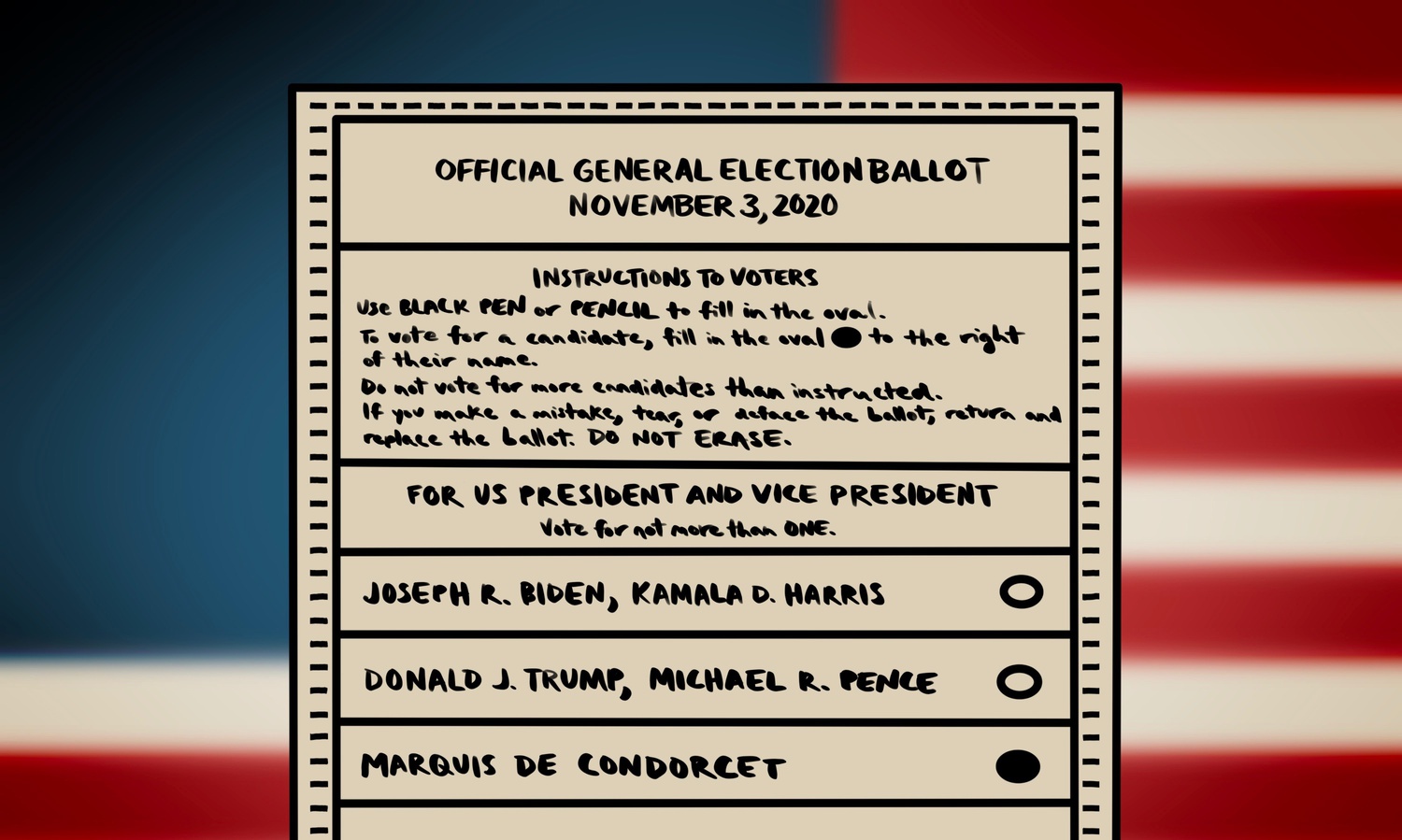 It’s no secret that the United States is a deeply polarized country. According to a Pew Research study, the ideological gap between the median Republican and Democrat voter ballooned between 2004 and 2017. More troubling, political scientists like Shanto Iyengar and Masha Krupenkin have observed that voters today are more galvanized by hatred of the opposition than confidence in their own side, leading pundits on both sides of the aisle to worry about the nation’s long-term stability.

What happened? Social scientists have proffered several explanations. Iyengar and Krupenkin highlight the Balkanization of news media, which promotes partisan echo chambers that reinforce one’s biases. Another potential cause is what Bill Bishop terms the “Big Sort,” in which voters increasingly seek to live in communities mirroring their ideological commitments.

My preferred explanation, however, concerns the American method of voting: plurality rule. In a plurality rule election, voters select only one candidate for each position, and the winner is whoever nets the most ballots, no matter how small a percentage of the total. The upshot is that plurality rule is particularly vulnerable to strategic voting, in which participants vote against their preferences in order to achieve a particular outcome — e.g., if their favorite candidate is unlikely to be one of the top two vote-getters. In a trend known as Duverger’s Law, this results in plurality rule inclining inexorably toward a two-party, polarized system, crowding out third-party candidates by putting their voters at a strategic disadvantage.

And the polarization doesn’t end there. Not only is a bipolar party system tailor-made to generate candidates loved by one half of the electorate and loathed by the other, but social science data indicate that ideological groups in general incline toward extremism. Put bluntly, plurality rule polarizes the electorate, and human nature does the rest. The system feeds on itself.

All of this paints a pretty bleak portrait of plurality rule. But never fear! For decades, social choice theorists, who study voting systems and societal welfare, have advocated an alternative system of voting that steers clear of these pitfalls. The system, dubbed “Condorcet’s method” after its creator, has voters rank candidates in order of preference, then chooses whichever one beats all others in head-to-head contests. Unlike ranked choice voting, which starts with voters’ first selections before working down the ballot, Condorcet’s method treats all contests on equal footing — a feature that, as economists Partha S. Dasgupta and Eric S. Maskin have shown, makes it uniquely immune to strategic voting. Even if your favorite candidate is unlikely to receive a plurality of first-choice votes, Condorcet’s method renders it advantageous to list that candidate first, followed by your second favorite, and so on.

Within parties, there’s ample evidence that Condorcet’s method would be a safeguard against extremism: some have even argued that it would have stopped the nomination of Donald Trump in the 2016 Republican primary. But the real benefits would be in the more polarized general election. Since choosing among the two most popular candidates would no longer confer a strategic advantage, voters would be incentivized to vote their true preferences, circumventing Duverger’s law and yielding a wider array of viable candidates. And according to the median voter theorem, the outcome of a Condorcet election will tend toward the preferences of the electorate’s middle — cutting extremists out of the running.

Some voters might balk at the prospect of a centrist dynasty. But this instinct, I think, is misguided. It overlooks the fact that a centrist from Manhattan, New York will look very different than one from Manhattan, Kansas. And at the national level, the choice is not whether to have centrism, but how to have it: drifting with the consensus, or oscillating between extremes. On both sides of the aisle, the latter option seems to have given the country whiplash.

For all its virtues, Condorcet’s method is unlikely to be adopted anytime soon. Tradition is slow-moving, and for the presidential race, instituting Condorcet’s method would require abolishing the electoral college, which would take a constitutional amendment at the federal level — or, as some have suggested, a pact among the states. But as the fissures between Americans continue to broaden, it’s time to start considering concrete strategies to improve the situation. Somehow, we’ll have to learn to live together. We don’t really have a choice.

Patrick M. Magee ’21 is a joint Philosophy and Physics concentrator in Currier House. His column appears on alternate Thursdays.