Postcard from Shanghai, China: A City on Expo 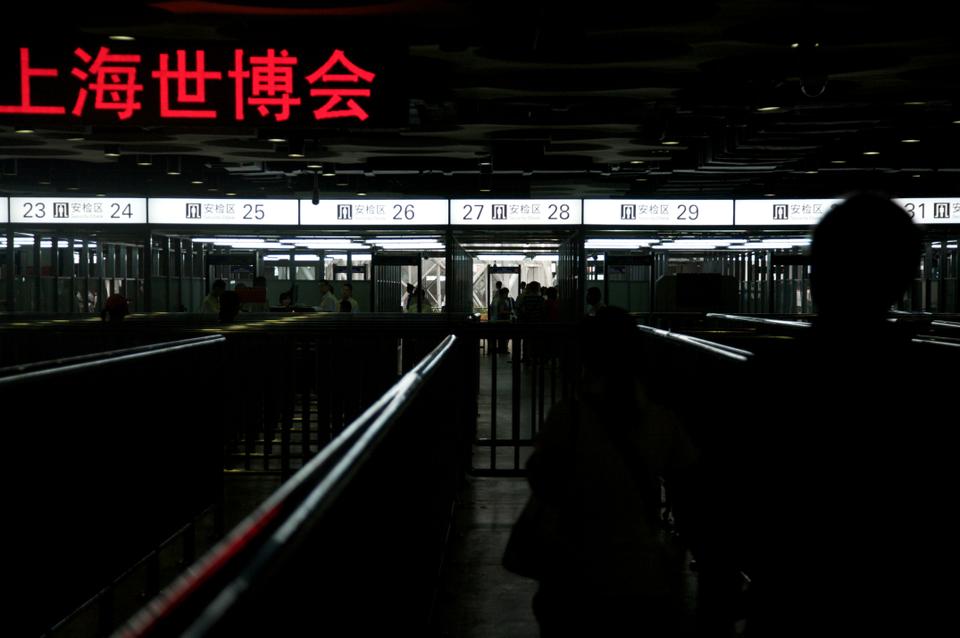 - The Shanghai World Expo 2010 is the first exposition recognized by the Bureau of International Expositions to be held in a developing country. Its theme is "Better city, better life", and concordantly, many of the pavilions are concerned with ideas of sustainable urban development and industry. Pictured is one of the gates where people queue to enter. By Noor M.R. Beckwith 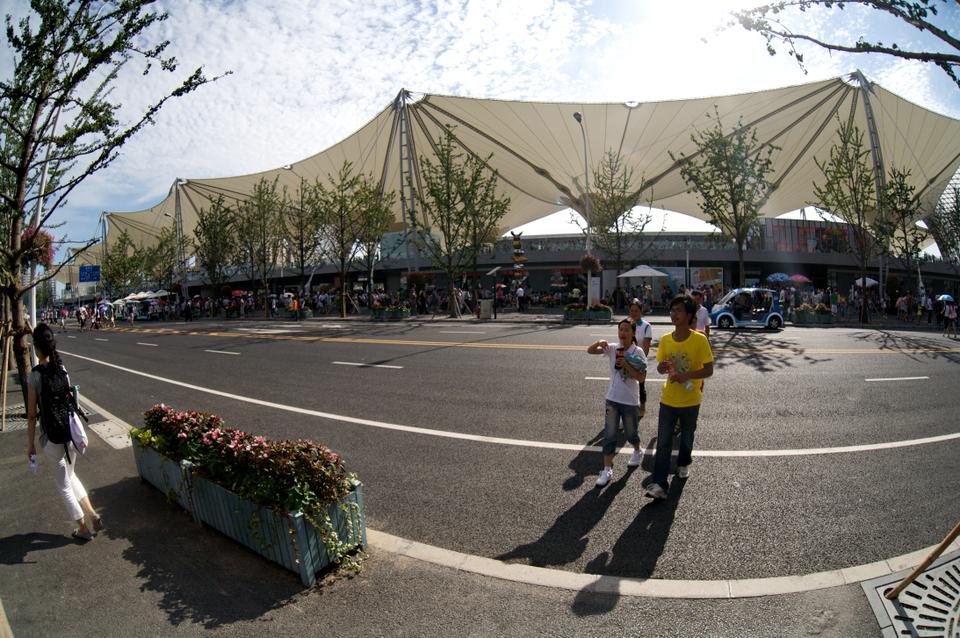 - The Expo Axis, or Expo Boulevard, is the largest single entity in the exposition; it is the four-floor, kilometer-long, semi-open nucleus of the Expo. Much like a mall, it offers food, entertainment, and shopping, as well as subway access, and it adjoins the other permanent Expo buildings such as the China Pavilion and the Performance Center. By Noor M.R. Beckwith 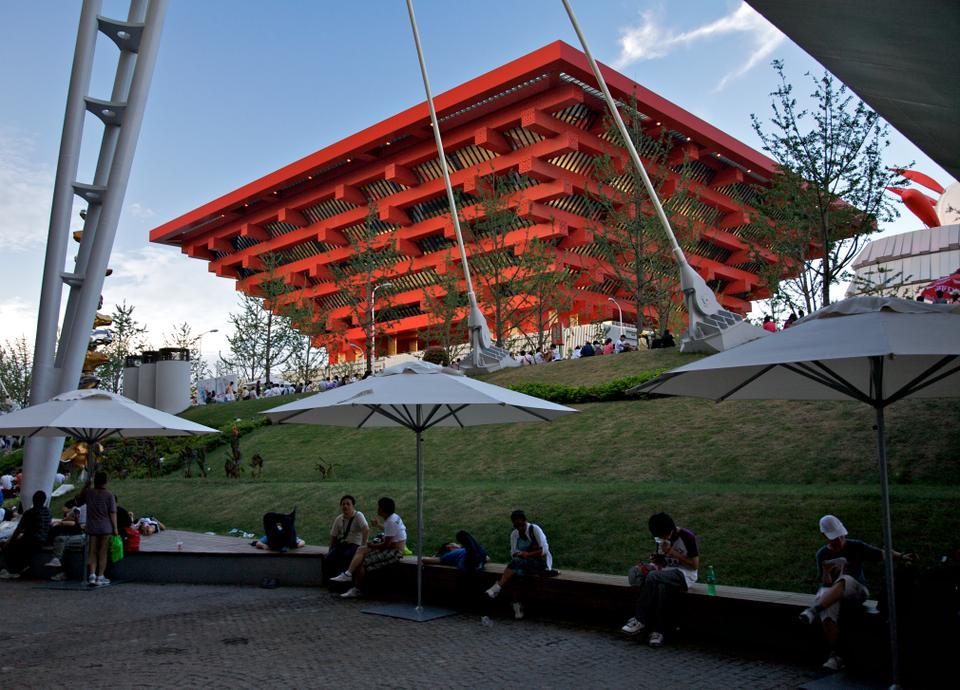 - The breath-taking China Pavilion is a massive, bright red edifice in the shape of a traditional Chinese imperial crown. The line for this pavilion can be hours long on a busy day. Pavilions representing 189 countries are on display at Expo 2010. By Noor M.R. Beckwith 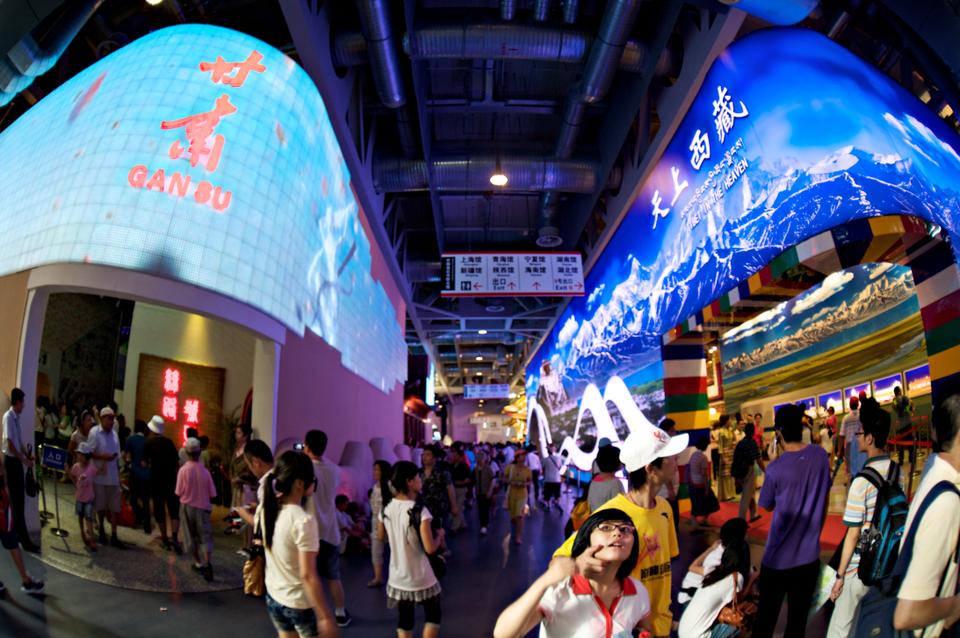 - Located on the first floor of the Chinese Pavilion are mini-pavilions for each province of China. Inside are models, images, movies, and music showcasing aspects of provincial pride and accomplishment in the arts, sciences, industry, and history. Pictured are the pavilions for Gansu and Tibet. By Noor M.R. Beckwith 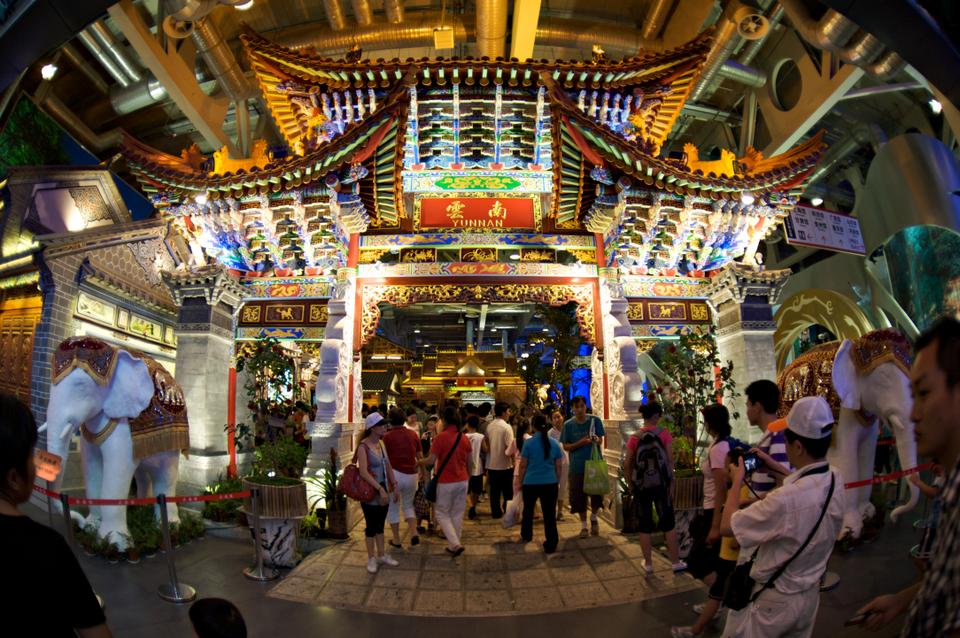 - Pictured is the pavilion for Yunnan province, constructed in a traditional decorative style. This is the province where photographer Noor M. R. Beckwith '11 has spent his summer studying Mandarin and medicine. The other floors of the China Pavilion are accessible by reservation only. By Noor M.R. Beckwith 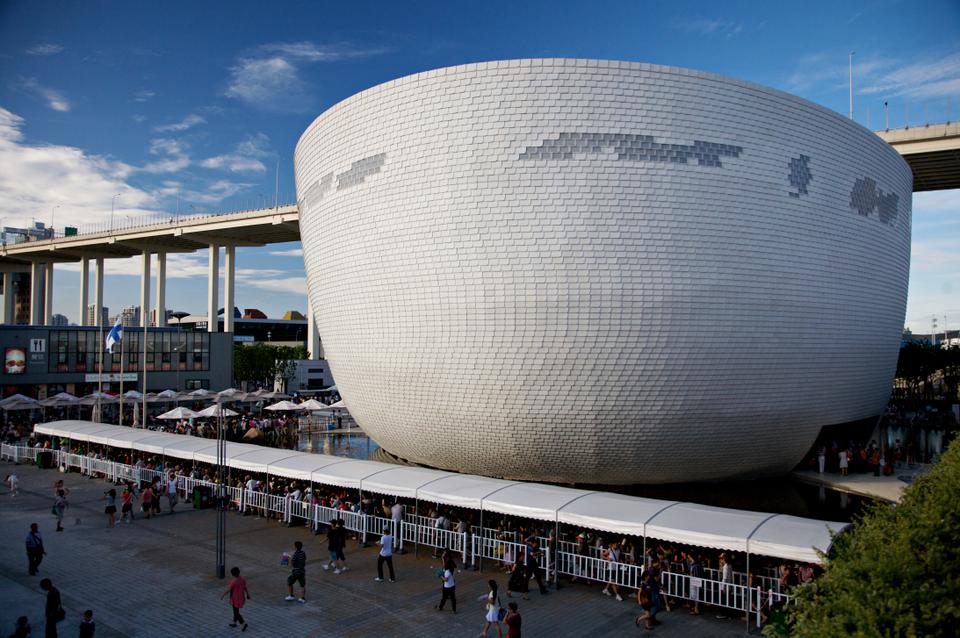 - Many of the national pavilions are truly architectural marvels. This is the Finnish pavilion, which was designed such that it can easily be deconstructed, relocated, and rebuilt. After the Expo is over at the end of October, the building will be sold to the highest bidder. By Noor M.R. Beckwith 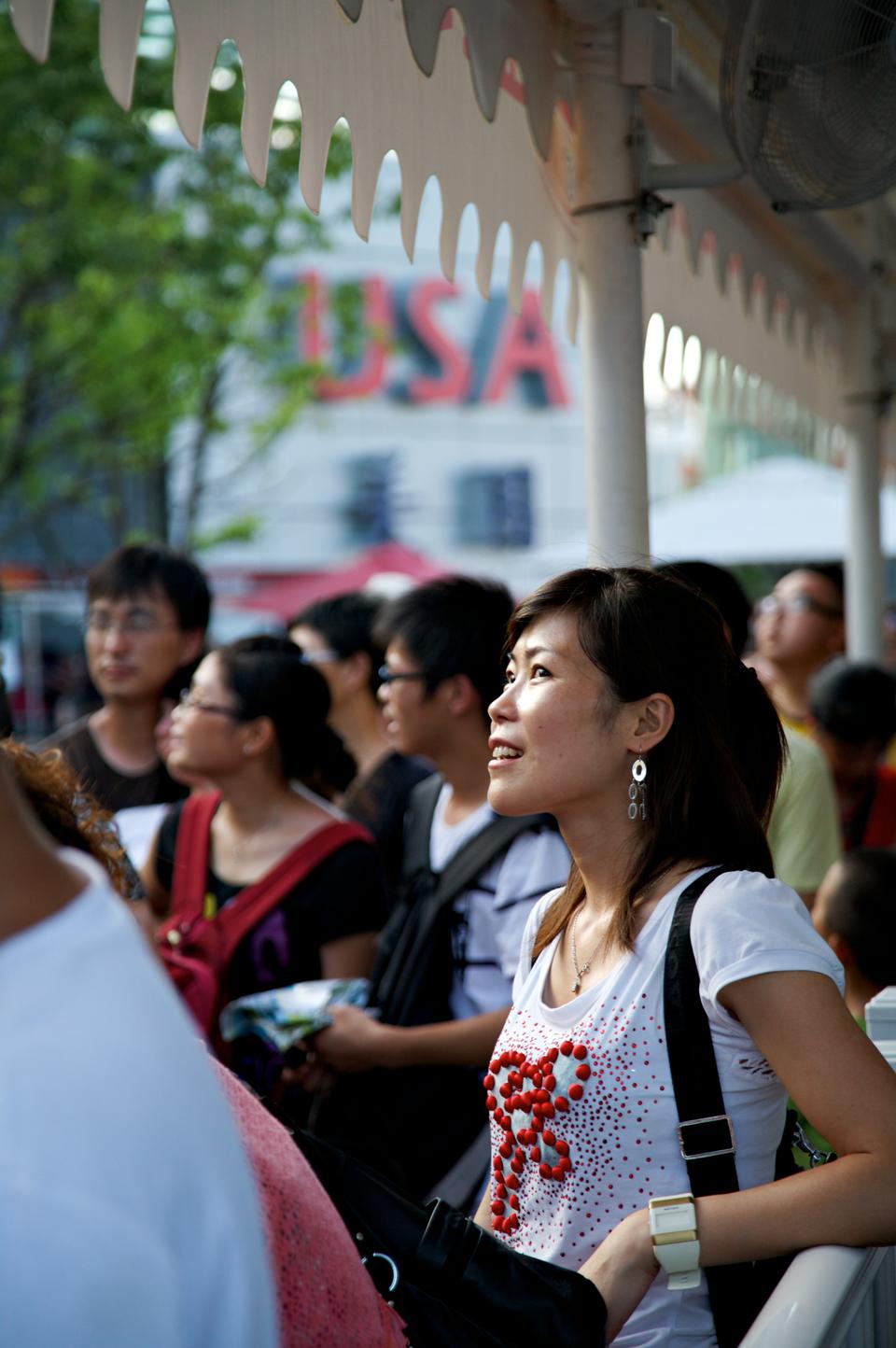 - The United States decided to join the Expo very late, so its pavilion is generally not considered to be very impressive. Among other things, it features an American diner—set up by KFC and Pizza Hut, two popular chains in Shanghai—and videos of President Obama and Hillary Clinton talking about what it means to be American. Here a woman watches an introductory video as she waits in line to enter. By Noor M.R. Beckwith 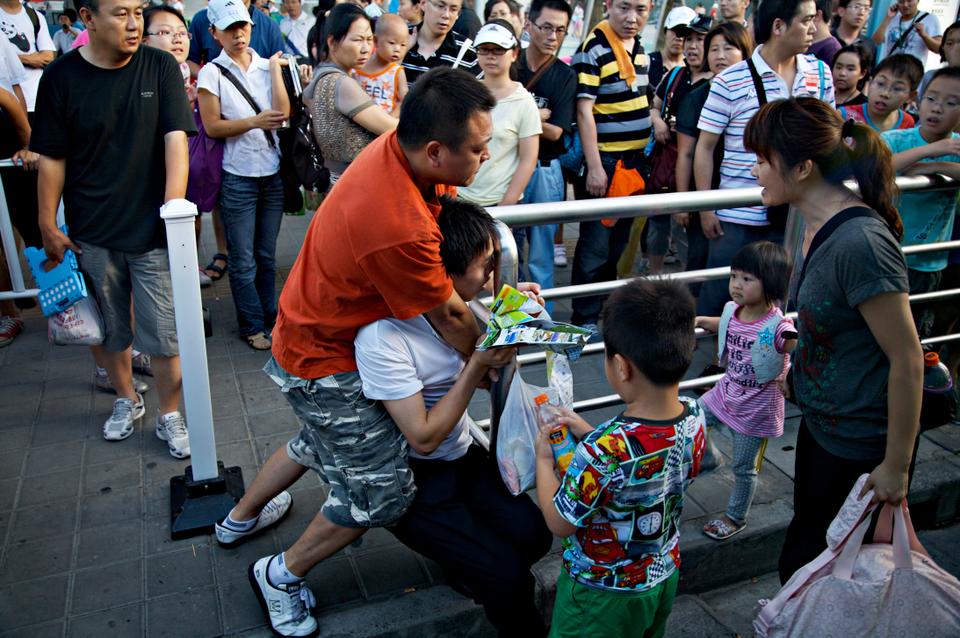 - Two men fight at one of the shuttle stops inside the Expo grounds. With lines up to 10 hours long at pavilions such as Saudi Arabia's and with temperatures often rising to 95 degrees Fahrenheit, tempers easily flare. By Noor M.R. Beckwith
After six weeks of studying traditional Chinese medicine and Mandarin in Kunming, Yunnan Province, Crimson photographer Noor M. R. Beckwith '11 takes a week to tour Shanghai, which is currently hosting a world expo. China spent more in preparation for the Shanghai Expo than it did in revamping its capital Beijing for the 2008 Olympics.