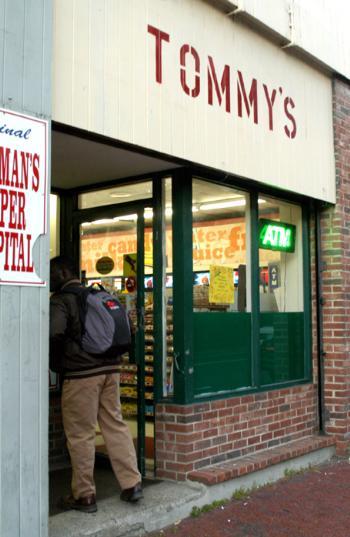 Tommy’s Value, a Harvard Square convenience store that is a favorite among undergradutes, will now stay open all night on weekends.
By Risheng Xu, Contributing Writer

Harvard students with frequent late-night cravings for beef jerky and Twinkies will now be able to acquire these delicacies all night long on Thursdays, Fridays and Saturdays at Tommy’s Value.

As of last night, the Mount Auburn Street convenience store, located next to Tommy’s House of Pizza, will remain open 24 hours a day, three days a week.

“Eighty percent of our customers are students from Harvard University. Now they can come anytime,” said store manager Tash Deep.

By keeping its doors open 24 hours, Tommy’s Value hopes to attract more students who need a midnight snack to sustain them through long nights of studying.

The store’s owner, who could not be reached for comment, will be watching Tommy’s sales over the next three months. If revenues between 2 a.m. and 8 a.m. increase, then the store will consider opening later for more days during the week, according to employee Sanu Kumar.

Student patrons of Tommy’s said yesterday that they will definitely take advantage of the new hours.

“I think it will be good for [Tommy’s] business, and I’ll definitely come here in the wee hours of the morning,” said Marisa A. Puccini ’05.

Kumar said that some of the most popular items sold late at night are cigarettes, non-alcoholic drinks and ice cream.

The move to longer store hours is due in part to efforts to bolster recently declining revenues.

According to Kumar, Tommy’s can only pull in approximately $600 per summer day, including expenditures. After subtracting maintenance costs of about $1,000 per day—including employee pay and delivery expenditure—Tommy’s is in the red for most of the summer months, Kumar said.

But Tommy’s business has been doing better since school started, Deep said.

“Business has picked up since September,” said Deep. “During the summer, sales drop because of a lack of term-time students.”

Kumar, however, maintained that Tommy’s is still suffering financially. Tommy’s pulled in about $2,200 per day in 2002, setting its profit at about $1,000 a day. Yet, this school year’s revenue has dropped drastically to $1,500 a day. With net profits dwindling, the store is looking for other ways to try to attract customers.

Kumar said that Tommy’s is not necessarily trying to broaden its customer base, and that students will remain its number one patrons. The store is constantly trying to think of new products that may cater more closely to students’ needs, he said.

For example, Tommy’s is looking at carrying fresh fruit juice. If such a plan is implemented, products will arrive in the summer of 2004. The store has already diversified its inventory, expanding its DVD rental section and even selling cellular phones.

In addition, students can request anything they do not find in Tommy’s by writing it on a clipboard in the front of the store.