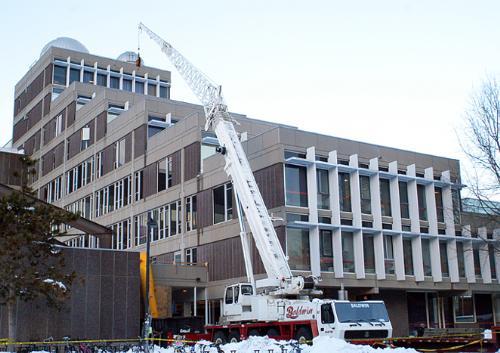 A crane sat in front of the Science Center yesterday as construction continued on the building. The renovations are expected to be finished next March, two months later than officials originally planned.
By Samuel M. Kabue, Crimson Staff Writer

After eight months of construction, renovations to the Science Center will not be completed until next March—two months later than expected, according to officials.

But the departments waiting on the new space—namely statistics and math—appear unfazed by the delays.

“We weren’t counting on having the new space available before April, so it [the delay] has not been a disruption,” wrote Chair of the Department of Mathematics Joseph D. Harris in an e-mail.

He said the department was expecting the delay and was not relying on using their new classrooms and offices until later this spring. It is currently housed on the fourth floor of the Science Center.

The setback is due to unexpected construction challenges, according to Capital Projects Manager for the Faculty of Arts and Sciences (FAS) Department of Physical Resources Jeffrey J. Cushman ’69.

“We had originally thought to be done by mid-January, but there are two or three things that still have to be done,” said Cushman. “When the renovations started, we discovered some few things that did not show up in the initial design, like extra concrete in some of the floors that called for more time.”

The delay means that some departments housed in the Science Center will have to make do with their currently cramped space for two extra months before they can move to their new, more spacious homes.

According to Cushman, the large amount of renovations required that the work to take place in phases.

The East Terrace portion of the renovated section, facing Oxford Street, has already been finished, allowing the History of Science department to move into its new offices—which professors said they are enjoying.

“Our offices and classrooms are very popular with the faculty and students,” said History of Science Acting Chair Charles E. Rosenberg.

Statistics department chair Donald B. Rubin said that though the renovations were something of a disturbance to the professors and students in his department, he hopes that the newly renovated rooms and increased office space will be worth the wait.

“Although the construction is a real pain, we anticipated the delays and have tried to plan for them,” he said. “Everyone seems to understand that the short-term inconvenience, with luck, will lead to a better future for those associated with the department.”

Rubin said the new space will catalyze the expansion of the department.

“We...hope to grow, at least modestly, in the near future,” he said.

The construction, which started last May, is the first major renovation ever carried out on the Science Center, though there have been many annual, small scale projects in the past, according to John B. Mathers, the assistant director of the Science Center who is in charge of physical planning and development. Previous projects include the renovation of the laboratories and the lecture halls.

In addition to improving the state of the Science Center by adding more space, Cushman said the fire alarm system in the whole of the facility was upgraded.

According to the initial plans, the renovations will add 32,000 square feet for a new museum and create a more energy-efficient building. The administrative wing that faces Oxford Street will gain three more floors, with the second floor housing the Collection of Historical Scientific Instruments.

The rear of the building will also have its seventh floor extended to accommodate a library and more classrooms for the statistics department.