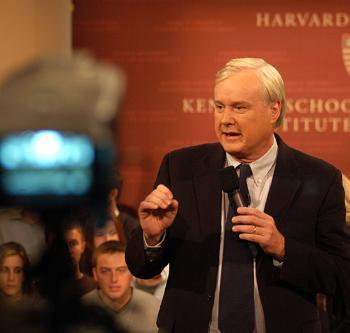 Chris Matthews sits in his room in The Charles Hotel three hours before the sixth and final segment of “Hardball: Battle for the White House.” His eyes slide between the number pad of his cell phone, a pile of potential questions on the table and the TV in the corner (tuned to CNN—The Charles doesn’t get MSNBC, he explains).

In addition to “Hardball,” which airs every weeknight, Matthews hosts CNBC’s “The Chris Matthews Show” on Sundays. He’s written four books. He has three children. He’s a busy guy, but he never stops absorbing information.

On his shows, Matthews’ converts this arsenal of information into rapid-fire questions.

“He has the ability to keep a program moving quickly and [engage] the audience, which for a television program is absolutely essential,” says Dunster House Master and IBM Professor of Government and Business Roger B. Porter, who attended the taping of last night’s interview with Democratic presidential candidate Wesley K. Clark.

Matthews’ style can be traced to the hero of his college days, controversial newspaper columnist Joe McGinnis.

Matthews recalls a radio show which began with the host asking, “What did you think of McGinnis today?”

Like McGinnis, Matthews strives each day to provoke his guests—and thus provoke a national debate.

From Politics to Punditry

Matthews began his career in politics, writing speeches for Jimmy Carter and serving on the staffs of two senators and House leader Tip O’Neill.

He says the experience writing speeches prepared him for opinion journalism.

Matthews wrote a nationally syndicated column for the San Francisco Chronicle for two years and now does 80-second commentaries on “The Chris Matthews Show.”

“A speechwriter will become a good columnist,” he says, citing William Safire, Peggy Noonan and Charles Krauthammer as other examples. “It’s production of opinion, writing for yourself and hearing your own sound.”

Matthews’ experience in politics has lent him a unique perspective as a journalist, according to David R. Gergen, a professor of public service at the Kennedy School of Government, White House adviser to four presidents and former editor of U.S. News and World Report.

Though he appeared on CBS and ABC as a commentator while he was Washington bureau chief for the San Francisco Examiner, Matthews made the jump to TV host amidst the cable news explosion of the mid-1990s. He joined the then-seven-year-old CNBC in 1995, while Fox News and MSNBC were still in development.

Media critics have bemoaned the profusion of “soft news” and “infotainment”—the blurring of the line between news and entertainment—in the era of 24-hour news channels, but Matthews says that line never existed.

“All news is entertainment,” he says. “Reading and watching the news is what you do for enjoyment. What other motive would there be?”

Nevertheless, Matthews acknowledges that cable news channels have changed the media landscape, because viewers are now inundated with information that is part opinion, part analysis and part news.

But that doesn’t mean it isn’t demanding for viewers—“Nobody can be casual watching Hardball,” he says—and he says it challenges him, too.

“I never know what to ask and I try to get the right questions, and the candidates never like them,” Matthews says. “They want speech cues.”

“I think he often gets people beyond the standard political pap, to where they live,” he says.

Matthews accomplishes this with an understanding of issues that allows him to confront his guests, according to Dawn Birch, stage manager of the “Battle for the White House” series.

Gergen pointed to Matthews’ pressing of Clark about his removal from the post of Supreme Commander of NATO forces in Europe. Matthews suggested Clark was fired—the general would say only that he was asked to step down three months early because of “politics.”

“There you saw Chris Matthews at his best—aggressive pursuit of the story,” Gergen says.

Asked whether his political views ever have an impact on his interview, Matthews shifts his eyes away from CNN just long enough to correct a Crimson reporter’s grammar.

Gergen says this contrarian approach can make Matthews seem to favor one political party. During the Clinton impeachment proceedings, for example, people thought Matthews was Republican, he says, while his criticism of the war in Iraq has led some to accuse him of siding with Democrats.

But neither is correct, Gergen says, because Matthews is interested in ideas, not parties.

“What you see in Chris is a man becoming passionate about issues and his passion shows,” Gergen says. “It’s not partisanship, it’s passion.”

“Everybody has opinions,” he says, maintaining that his own don’t influence the questions he asks. “I’m no less tough on the people I voted for.”

Though his skepticism of the Bush administration’s foray into Iraq is probably evident to viewers, he says, people who try to place him in one camp or another will fail.

“I never defend, I never explain,” he says.

—Staff Writer David B. Rochelson can be reached at rochels@fas.harvard.edu