Self Hurting After Short Outing in Cornell Blowout 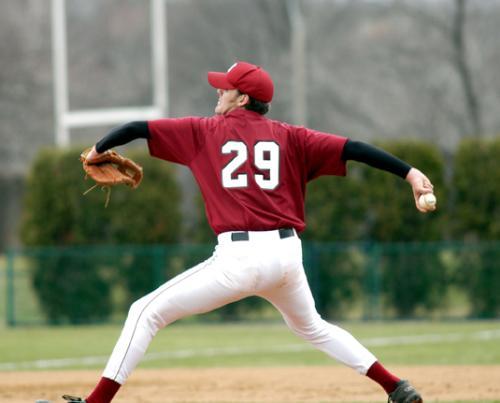 The first time Harvard senior Matt Self got hit hard yesterday, during a shaky first inning, he barely suffered a scratch.

The second time—when catcher Brian Lentz beaned him with a throw intended for second base—Self shook it off, even laughed about it.

The third time? Self had no Houdini acts left in him.

One week after his masterful display of control against Columbia, Self, reprising his role as the replacement for freshman Matt Brunnig, had trouble locating his fastball in yesterday’s 12-0 loss to Cornell.

Four of the five batters he faced in the first inning managed hits off him. But after Lentz and freshman Josh Klimkiewicz—with an assist from freshman leftfielder Chris Mackey—each took turns cutting down Big Red baserunners, Self walked off the mound with little damage done to him, save for one run and a small headache caused by Lentz’ misfire.

“It’s still throbbing a little bit,” Self said after the game. “[The throw] hit me pretty square in the side of the head.”

The second inning, by contrast, was a pain in the neck. At Columbia last week, Self had success mixing a slider and a changeup into his arsenal. He didn’t get to use those pitches much yesterday, as his control problems put him behind early in most of his counts.

“When you’re not spotting your fastball, you can’t set up your off-speed stuff as well,” he said.

Even when Self, a ground-ball pitcher by trade, made the pitches he wanted, Cornell’s hitters managed to find holes.

“That’s one of the frustrating things—when you think you’ve gotten a guy to swing off his front foot or jammed him in on the hands, but the ball gets through the hole or bloops in for a hit,” Self said.

“Obviously most pitchers will say they need their fielders on their toes,” he added. “I probably need it a little more because in my case, I don’t strike guys out with any regularity.”

Dawn of An Error

After three home games, the Crimson’s fresh-faced infield unit has gotten off to a dubious start on the O’Donnell Field dirt. Harvard committed five errors in yesterday’s 12-0 defeat and the Crimson’s three new starters around the horn had a hand in four of them.

“It was really disappointing,” Harvard coach Joe Walsh said. “We kicked the ball around the infield.”

Sophomore shortstop Ian Wallace had one, while Zak Farkes, Harvard’s rookie second baseman, committed a pair, including a botched double-play ball in the fifth. In addition, Klimkiewicz failed to block a ball in the dirt on a throw by Lentz in the second inning.

“He kind of ole-ed it,” Walsh said. “Lentz made the throw, so I suppose you give him the error. But you’ve got to stop that ball.”

It wasn’t the first time Klimkiewicz and Lentz have gotten crossed up trying to cut down a base stealer. In the Crimson’s home opener against Rhode Island, Lentz’s throw bounced off Klimkiewicz’s glove and into left field, allowing the runner to score what became the winning run.

Harvard got better defensive play from its infield in the second game yesterday, including a nifty 4-6-3 twin-killing on a ball up the middle to end the game.

After using him in the leadoff spot in back-to-back games last week, Walsh penciled freshman Lance Salsgiver into the top spot again for both of yesterday’s games.

Salsgiver had split time with Wallace there to start the season, but was inserted in the seven-hole last month for seven straight games. Walsh said yesterday that he moved the fleet-footed rightfielder down in the order because he wanted to maximize the team’s RBI potential out of that spot.

But Wallace batted just .258 (8-for-31) over that seven-game stretch, including four strikeouts in the three games leading up to the Columbia series, when Walsh reinstalled Salsgiver at the top.

“Especially in these seven-inning games, you need to get that leadoff guy on base,” Walsh said.

Salsgiver used his time down in the lineup to correct his approach at the plate. While his leanest stretch—a 2-for-11 spell—didn’t extend longer than three games, that was enough to qualify as a slump for Salsgiver, whose .341 average is third-best on the team.

“I’d guess you’d call it ‘drifting into the ball’,” Salsgiver said of the problems he was experiencing. “I was waving at the ball. I needed to be more aggressive.”

He was yesterday, despite playing with a strained right ACL that he sustained while diving for a ball in practice last week. Salsgiver collected two of the Crimson’s nine hits, and neither of them were cheapies.

After stroking a ground-rule double to center in game one, he just missed making solid contact on a hard fastball from Cornell ace Chris Schutt, settling for a deep fly out to right. Three trips later, he battled through what Walsh later called a “great at-bat,” eventually lining a single to right. He went on to score Harvard’s third run.

Walsh said he was cautious with Salsgiver on the basepaths yesterday because of his knee. But Salsgiver, who leads the team in stolen bases with eight (in eight attempts), expects to get back to his running ways soon. He said yesterday he likes Walsh’s aggressive approach.

“I think most days, if I get on base with no outs, Coach will steal me,” he said.