Pre-Frosh Get Taste of Harvard 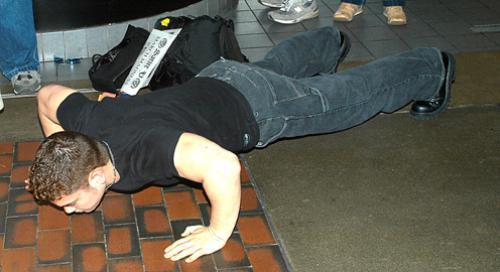 By orders of humor magazine Satire V, pre-frosh MICHAEL H. OSHIMA does push-ups yesterday to win nachos and his name in the publication.
By Samuel M. Kabue, Contributing Writer

They came from east coast and left coast—and as far away as Zimbabwe—bearing their trademark red folders and looking for a brief taste of life at Harvard College.

Hundreds of pre-frosh students descended upon Cambridge over the weekend, bunking with undergrads and clinging to their campus maps—all in order to help decide where they will spend the next four years.

A full schedule of activities—meant to provide a picture of College life and woo the undecided—awaited the accepted applicants, including a welcome speech by University President Lawrence H. Summers, Springfest, an Extracurricular Concentration Fair and a three hour performance by the Harvard Ballroom Dance Team.

“Even though the weather really sucked yesterday, it still seems like Harvard is wilder than I thought,” said pre-frosh Ying Li as he tried to fold up the multitude of informational fliers that he had collected from the extracurricular fair, which was held at the Science Center yesterday.

Many of the pre-frosh said they had heard many rumors about Harvard—including a distorted version of the “three lies” fable concerning the John Harvard statue in front of University Hall—but this time around they got first hand experience with the social aspects of Yard life.

“I’ve heard stories that if you pee on John Harvard, then he’s going to curse you silently, and his curse is so strong that you are never going to get a girl in your four years of college,” said Steve Mark, from Buffalo Grove, Ill. “If there’s anything I made sure I did not do, it was to even take a look at him…. I can’t imagine living close to so many cute girls, yet so distant from my life.”

Others said they were surprised by the social climate at the College.

“I always thought that it was impossible for one to talk to Harvard students if you are not one of them, but I think I was wrong” said Nathan McCormick, from Kansas City, Mo. “Though most of the upperclassmen that I talked to yesterday were either drunk or half asleep, I think they make good company, and I look forward to joining them next fall.”

However, Harvard did not meet the expectations of Doug Janieson, of Philadelphia.

“I was disappointed because I’ve been looking for [last year’s Olympic figure skating champion] Sara Hughes for the past days, but I have not yet managed to see her…. I thought she would come for the regional meetings yesterday, but she did not,” he said.

And even as most pre-frosh were complaining that the Cambridge weather was at its worst Saturday, some expressed happiness at the presence of rain.

“I really liked the rain because I don’t see much of this at home,” said Floridian John Voith. “I also met and liked a lot of nice kids, and I like Harvard students because they walk really fast.”

Despite the maps issued to each of the visiting pre-frosh, some still managed to lose their way.

“People here are so nice because I got lost a million times, and I twice asked the same person of the directions to the Yard, and the person was really charming because he still explained the way to me anyway,” said Tina Zuzek, of New Jersey. “But I didn’t like the Mather Lather—it was so packed that I couldn’t get to the foam.”

The pre-frosh got their last treat today at the ice-cream bash in Annenberg, but had to fight long lines to get to the desserts.

“I hope this is good ice cream that I’m going to get; I’ve waited outside here for eternity,” said Robby McIntosh from Tewksbury, LA.

Most said that they felt that the weekend helped them to decide how they will respond to the thick envelopes that arrived in their mailboxes earlier this month.

Californian Bobb Yribarren said Harvard saw something in him that schools in his home state didn’t.

“I was rejected by my city college and Stanford, but now I have Harvard,” he said.

One student, who did not want to reveal her name in order to “keep a good name with the College” said that she was admitted into all the seven Ivies and MIT, and that Harvard failed to meet her standards.

She said she has made up her mind to attend Yale University.