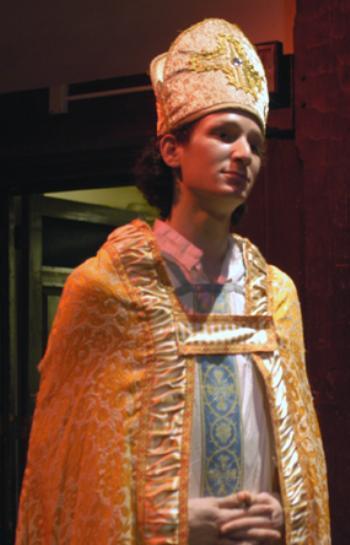 In the era of Carmen On the Common and the dominance of classical opera, finding original, modern opera that both entertains and provokes audiences has becoming increasingly difficult. But the diversity of Harvard’s musical offerings rarely disappoints and neither does VI-4, the fourth annual production of short operas composed, produced and performed by Harvard undergraduates.

This year’s production features three extremely distinct operas that range from emotional drama to farce. VI-4 was presented by the Harvard-Radcliffe Contemporary Music Ensemble (HRCME) in the Leverett Old Library, directed by Luke B. Hedrick ’05 and produced by Andrew B. Pacelli ’04.

VI-4 differs from sometimes impenetrable classic opera because all three operas were sung in clear and understandable English. The intimate atmosphere in the Leverett Old Library added another level of immediacy to the scantily cast vignettes, which were unhampered by excessive sets. All three were accompanied by various combinations of a chamber ensemble assembled especially for VI-4 and conducted by Music Director Anthony S. Cheung ’04.

The program began with a surrealist drama entitled strapped (music by Matthew T. O’Malley ’04 and libretto by Anthony J. Gabriele ’03) that was cast with four vocalists named simply “him,” “her,” “man” and “woman.” In strapped, a lonely figure called “him” sits head in hands on a dark stage, illuminated throughout by one misty spotlight. The “man” and “woman” who play harsh advisors to “him” stand in the dark background.

The premise of “strapped” was an angst-filled love and relationship crisis, and though the story was not itself innovative, several aspects of the production made the work notable. The music, although not flawlessly performed, was an eclectic mix of modern classical styles which combined with voice and lighting to create a sense of muted internal struggle. The repetition of the lead male part solidified the luckless lover’s deep mournfulness and confusion while he was simultaneously subject to attack by both the feminine and masculine persona as embodied in the “man” and “woman.”

When the subject of all the anguish, “her,” woke and detached herself from a metaphorical mattress placed at the back of the stage, her high feminine voice appropriately sliced through the fog of angst created by her unworthy lover.

The contrast in the voice parts helped set an appropriate tone. The mourned lover’s consistently self-deprecating and somewhat whiny character—frequently interrupted by his beloved’s high, seemingly innocent hue and by a combination of scornful male and female voices—shaped a balanced tradeoff to unstable music.

After drama, VI-4 turned to lighter motifs, as exemplified in The Courting of Montebravado (music by Alexander S. Ness ’04 and libretto by Andrew B. Pacelli ’03). The fifteen minute opera is set in four short scenes that mimick and make fun of the traditional Italian court opera. The Italian names are unseemly and the plot deals with true love impeded by money-loving clergy and arranged marriage, which is ultimately saved by murder. The story is quite obviously a farce—and an entertaining one, especially in light of the fact that such an exaggerated drama might have been taken seriously. The laughter did not stop at the audience, but extended to the cast, a few of whom unfortunately could hardly contain themselves either.

Montebravado was accompanied by solo cello in a minimalist style. The accompaniment and voice were set together uniquely, although some words became uncomfortably stretched out. The accompaniment, although musically well-rounded, seemed slightly inadequate at times with several characters onstage simultaneously.

The VI-4 program concluded with a fascinating opera entitled Dr. Magic, the only libretto not written by an undergraduate, performed as an oratorio with minimal stage movement. The premise of Dr. Magic, written by Joyce Carol Oates with music by composer Carson P. Cooman ’04, derives directly from the hero of the title, a crafty magician. Dr. Magic invites a couple to the stage as volunteers and his interaction and experimentation on them scratch the seemingly ideal surface of their lives together.

Cooman’s music is tonally striking and rhythmically driven in a way that lends the opera surprising immediacy. Tonal contrast and dynamic changes fit the libretto perfectly, and still manages to avoidspredictability entirely. The listener is forced to move along with the opera’s fluctuations and pangs of emotion, such that at the end the audience aches for some peaceful resolution.

The vocalists, both undergraduates and graduate students for music schools and elsewhere, are mostly tremendously skilled, with notable talent coming from Sarah Burges Watson, Lara Marie Hirner ’04-’05 and Jon Stainsby.

Although all three operas occupy little over an hour, they are each a complete masterpiece. Each has an interesting original concept which is superbly executed, the most remarkable of which is Dr. Magic. It is truly amazing and valuable that operas by such talented composers can be seen right here in an intimate, untarnished atmosphere.