Crimson advances to the second round of NCAA tournament 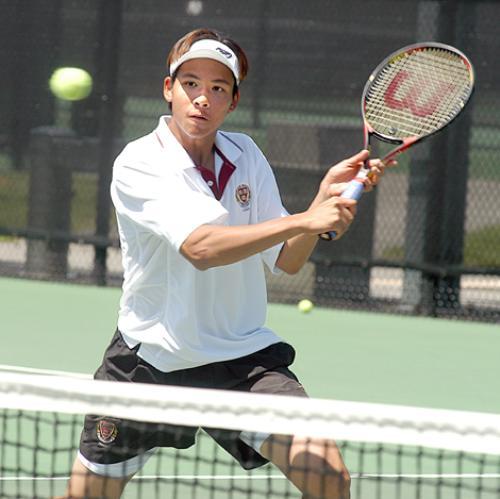 Sophomore Jonathan Chu, who starts at No. 2 singles, helped the men’s tennis team to its 12th Ivy title in the last 15 years. It is the second year in a row that Chu has played in the No. 2 spot behind junior co-captain David Lingman.
By Rahul Rohatgi, Crimson Staff Writer

Next year, the Harvard men’s tennis team will be the most experienced squad in the Ivy League. This season, it just had to settle for being the best.

With only one senior—co-captain Oli Choo—on the squad, the Crimson bounced back from a slow spring start to win the conference and advance to the second round of the NCAA tournament. Four of its top players—Dave Lingman, Cliff Nguyen, Mark Riddell and George Turner—were juniors, and No. 2 singles player Jonathan Chu was a sophomore.

Last month the Crimson progressed to the round of 32 of the NCAA team championships for the second straight year, but this time it was in more dramatic fashion. Ranked No. 40 at the end of the year in the ITA standings, Harvard hosted No. 17 Virginia Commonwealth in the first round of the tournament. Riding the home crowd’s support, the Crimson upset VCU, 4-3.

The next day, however, the exhausted Harvard team was swept 4-0 by the No. 15 seed in the bracket, Alabama.

Lingman, Chu and Riddell were also invited to the NCAA singles and doubles championships several weeks later, where they all fell in early rounds.

Harvard’s upset in the NCAA tournament capped an up-and-down year for the team. In October, the Crimson won its only team tournament, the ECAC fall championships, by defeating top-seeded Virginia Tech. It was Harvard’s first ECAC championship since 1999, and qualified the team for the February National Team Indoors in Kentucky.

A new Ivy league rule may have played a part in disrupting the Crimson’s play in the winter. Normally the NCAA mandates a so-called “dead period” during which teams cannot play matches, so Harvard has no competition in December and January. But teams work out together and practice intensely for the upcoming winter and spring seasons, which are the important times of year.

However, this year the Crimson also had to cope with the Ancient Eight’s new “seven-week” rule, which meant that during the dead period the team could not practice together.

“I don’t think we came into this season as well-conditioned as we might have been had we been able to work during the dead-period, so in those 4-3 matches, we just didn’t have quite enough gas,” Harvard coach David Fish ’72 said. “Guys were still sort of getting their feet wet.”

Indeed, the Crimson faltered in the winter, losing eight of its first 11 matches. The team’s national ranking also steadily slipped from a high of No. 29.

The commencement of the Ivy season reinvigorated the team. Having had to shuffle lineups earlier in the season due to injuries and inconsistent play, Fish settled on a basic roster that worked to league perfection.

Lingman and Chu, as they had done the previous season, took the Nos. 1 and 2 spots; Nguyen played at No. 3, while roommates Riddell and Turner played at 4 and 5. Rounding out the lineup was Choo at No. 6.

Harvard dominated Dartmouth 7-0 and dispatched of Columbia, Penn and Yale by scores of 6-1. The Crimson also avoided a pratfall by defeating Princeton on the road, 4-3.

The league championship came down to the final match versus Brown at the Beren Tennis Center. Another garrulous home crowd gathered to watch on a sunny April day, and it was not disappointed.

The Bears took some early leads, but several superb comebacks clinched the match for the Crimson. At No. 1 singles, Lingman fought back after dropping the first set 6-1 and won the next two. In a crowd pleaser, Riddell, after injury, was forced to save over a dozen match points in the second set before winning his match at No. 4 in three sets.

Harvard’s Ivy crown was the 12th in the last 15 years and its sweep through the conference cemented its spot as the front-runner for next year as well.

With almost all of its top spots in the lineup intact, the only question that remains is how much deeper the Crimson can get.

—Staff writer Rahul Rohatgi can be reached at rohatgi@post.harvard.edu.

Highlights Crimson comeback against Brown to go undefeated and win the Ivy championship. It is Harvard’s 12th Ivy title in the last 15 years. In the opening round of the NCAA tournament, the No. 40 Crimson upset No. 17 Virginia Commonwealth, 4-3, to advance to the round of 32 for the second consecutive year. Harvard takes ECAC fall championships for first time since 1999 with victory over top-seeded Virginia Tech.