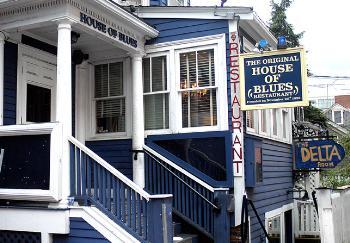 The original House of Blues on Winthrop Street has closed after 11 years of operation. Since its opening in 1992, the club's guests have included blues greats such as Al Green and Ronnie Earl.
By David B. Rochelson, Crimson Staff Writer

Just inside the locked door to the historic colonial that has been home to the House of Blues for over a decade, a blackboard framed by blue-green glitter surrounds a smudged blue goodbye: “We are CLOSED. Thanks for the memories.”

The lights are dark, and so is the stage of the original restaurant that has grown into a national chain of eight clubs and 22 amphitheaters.

After 11 years of hosting blues greats such as Al Green and Ronnie Earl, the Winthrop Street locale of the now-famous national chain closed its doors on Sunday.

House of Blues representatives said the cozy club—which fits only 180 people—is too small and they are seeking a larger venue in downtown Boston.

The other seven House of Blues franchises have capacities of over 1,000.

“We’re fully committed to the Boston area,” said Jack Gannon, House of Blues senior vice president for marketing. “When the right piece of real estate opens up, we’ll take advantage of that.”

Gannon said the search for a new site has been unsuccessful so far.

Now, tables inside the once-hopping nightspot are cluttered with the detritus of a decade of business, and a massive roll of bubble-wrap rests on the platform of the stairs.

“It doesn’t even look like the House of Blues anymore,” said Jacqueline Tedesco, one of the original bartenders at the club.

Isaac Tigrett, the founder of the Hard Rock Cafe, opened the first House of Blues on Thanksgiving Day in 1992.

The restaurant quickly became a hit, with the support of the celebrity duo of Dan Ackroyd and James Belushi, brother of the late John Belushi. Ackroyd and John Belushi had famously played the Blues Brothers on “Saturday Night Live” and in a movie spawned from the skit.

Harvard was also an initial investor in the flagship branch, just a few blocks from the Yard.

The site has maintained quirky traditions all its own since the Blues Brothers cruised around Boston in their trademark Bluesmobile to promote the club.

Tedesco said that the restaurant has also held a brunch for homeless people every Thanksgiving since its founding day.

The House of Blues has sold the flagship property to a buyer that remains undisclosed due to a confidentiality agreement.

A New York City restaurant chain, Brother Jimmy’s, will lease the space from the new owner pending a liquor hearing in Cambridge, according to the chain’s owner, Josh Lebowitz.

The International House of Blues Foundation, which funds art and music education with an emphasis on the contribution of African-Americans, will also close the doors of its Cambridge office at the end of the month and has cancelled its Boston area programs for the school year.

The Cambridge site’s eclectic collection of folk art will likely be moved to other House of Blues venues, according to Tedesco.

But lovers of the Harvard Square club’s artwork need not sing the blues. Tedesco said much of the unusual art will probably be shipped to a new House of Blues branch opening in Cleveland.