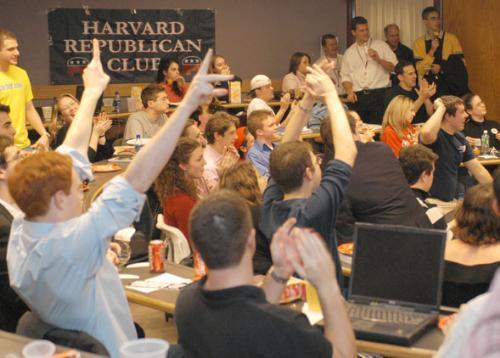 Excited election followers—mostly Democrats—milled around the Institute of Politics (IOP) last night to watch the votes come in and listen to calls from political experts.

With the John F. Kennedy Forum filled on all three levels, the IOP hosted a festive gathering complete with Christmas lights, American flags and popcorn. Big-screen TVs showed CNN throughout the night, muted only to broadcast incoming phone calls from political leaders and strategists.

Zachary A. Rothstein ’07 is not a member of any political organization on campus, but he said he went to the IOP because he knew there would be a large turnout.

“I wanted to be in a place where a lot of people congregated,” Rothstein said.

In addition to the food and decorations, Burden H. Walker ’06, a member of the IOP’s student advisory committee, set up computers with the status of close local races that students could check periodically.

To track the progress of the presidential race, organizers displayed a map of the United States on the bottom level of the forum. Each time a state was called for President Bush or Democratic candidate John F. Kerry, the state was colored red or blue, respectively, on the map.

But throughout the night election followers consistently cheered more for the blue states and booed for the red states.

Rothstein, who wore a patriotic white top hat on which he inscribed the name “KERRY,” cheerfully roared with the largely Democrat audience each time Kerry won a state.

“I heard, like, one guy cheering when they announced Bush won a state, but I haven’t really been able to find [the Republicans],” Rothstein said.

The Kennedy School Republican Caucus was indeed at the event, which it co-sponsored with the Democratic Caucus, but the undergraduate Harvard Republican Club (HRC) primarily stayed in a separate room that it reserved off of the main room.

Members of the Harvard College Democrats watched election coverage in a room opposite the HRC’s room.

Paloma A. Zepeda ’06, an HRC member from California who decided to watch the coverage in a smaller room at the IOP, said one reason everyone “out there” was having fun was that they were all rooting for the same candidate.

“People keep asking me, ‘but why, but why [are you supporting Bush]?’” Zepeda said. “But all I want to do is see the numbers just like everyone else.”

Zepeda, who is an IOP member-at-large, said that both students and faculty members have “yelled” at her because of her views. But her time at the IOP has made her a stronger Republican, she said.

“I’ve actually become more conservative from hanging out at the IOP,” Zepeda said. “I have to work harder, and learn faster.”