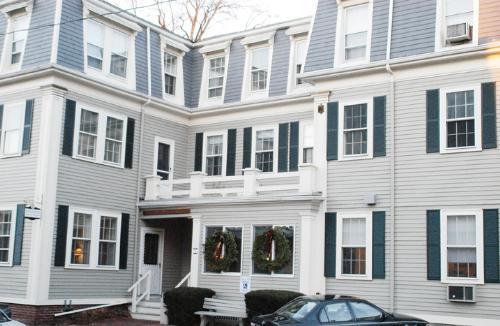 The Weston Jesuit School of Theology is considering a merger with Boston College, which could mean a move from its current Harvard Square location, above, to a campus across the Charles River in Brighton.
By Daniel J. Hemel, Crimson Staff Writer

The Weston Jesuit School of Theology, which has trained priests in Harvard’s shadow for more than eight decades, may leave its longtime home off Garden Street as part of a proposed merger with Boston College (BC).

Joining Weston and BC would create “a Jesuit presence unrivaled anywhere in the world,” according to BC spokesman Jack Dunn.

Merger plans are still in a preliminary stage, and officials from both schools said they do not expect to reach an agreement for at least six months. Any deal would require the approval of the Rome-based Society of Jesus—the official name of the Jesuit order. Both schools’ boards have given the go-ahead for talks to begin.

Weston officials said they will maintain close ties with Harvard even if their school moves across the Charles River to BC’s new real estate in Brighton.

“We don’t want to lose our relationship with Harvard,” said the Rev. Robert Manning, who is president of Weston, “and we don’t plan to.”

Students can cross-register between Harvard and Weston under the auspices of the Boston Theological Institute—an ecumenical consortium that also comprises Boston College.

Christine Bower, an assistant in the Divinity School Communications Office, said 37 Harvard students cross-registered at Weston last year, and 40 Weston students trekked from their tiny campus near Radcliffe to the Divinity School’s classrooms north of the Yard.

In addition, Weston’s assistant academic dean, John Stachniewicz, said that “we always have quite a few students from the Divinity School who come to our liturgies here and come here for spiritual direction.”

Manning said that if Weston moves, the school would consider implementing a shuttle service that would operate between Harvard Square and Brighton.

Diego Guevera, who is in the final year of Weston’s three-year masters of divinity (M.Div.) program, said he thought cross-registration with Harvard would continue even if the school heads to the other side of the river.

But Weston students are already beginning to wonder how their school will cling to its distinctive character if it becomes an appendage of BC.

“My fear would be that Weston gets alienated in that environment,” said first-year M.Div. candidate Kristen Peterson. “I’m hoping that the move doesn’t happen before I leave.”

Ignatius Ikunza, a second-year M.Div. candidate, said the move would likely yield academic benefits—but he said he would miss the social life Cambridge affords. “It’s going to be a sacrifice for me,” Ikunza said.

The school’s total enrollment this semester numbered 226 students. About three-fifths of them are training to be members of the clergy—diocesan priests, members of Catholic orders and Episcopal ministers. The remainder are lay students, Stachniewicz said.

Weston owns two buildings on Phillips Place—which runs between Brattle and Garden Streets—as well as several Jesuit houses throughout Cambridge and an apartment for lay students on Harvard Street toward Central Square, according to Stachniewicz. It rents classroom space from its next-door neighbor, the Episcopal Divinity School. Stachniewicz said talks with BC are still at such a preliminary stage that Weston has not decided what it will do with its Cambridge holdings if a merger deal is in fact reached.

The school will likely move into St. William’s Hall in Brighton, which BC recently purchased from the Catholic Archdiocese. Dunn wrote in an e-mail that BC is confident it will win approval from the City of Boston for using the building for academic space.

BC is the oldest Jesuit university in the country, and Dunn said that a merger with Weston would “help to make Boston College the center of Catholic intellectual thought in the United States.”

The number of men entering the Catholic priesthood has declined dramatically in recent years, straining the resources of small seminaries. BC has come under criticism from some who say the college is at risk of losing core elements of its Catholic identity.