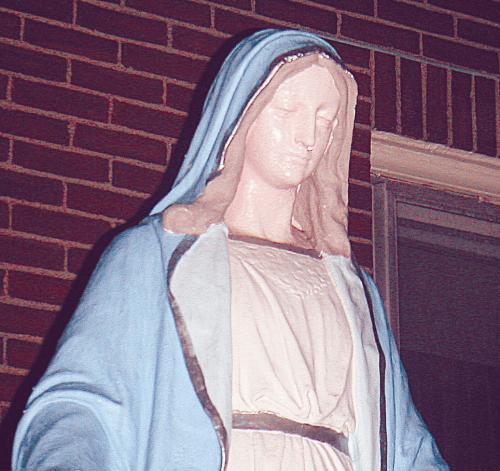 Some area residents believe this statue of the Virgin Mary, outside Medford’s Sacred Heart Church, has been crying since Feb. 9.
By Claire Provost and Joseph M. Tartakoff, Crimson Staff Writerss

A hand-painted, blue and white statue of the Virgin Mary burst into tears on Feb. 9 and has been crying ever since, according to many believers who have witnessed it outside of Medford’s Sacred Heart Church.

At least a dozen people from Cambridge, Somerville and Boston stood in the rain last Friday night to observe the purported miracle, and more continued to stop by over the course of the night, much as they’ve done for the past month.

Somerville resident Tricia Logrippo came to see what everyone had been talking about. “I believe in everything. You have to have some sort of beliefs,” she said. “Ask anybody at MIT after they go through all the numbers they don’t know what it is maybe but they know there’s something else to [life],” said Logrippo, who said she does not attend church.

But many who have visited this statue, located just a stone’s throw from Tufts University, remain skeptical, including Robert Doherty, the talkative and charismatic pastor of Sacred Heart Church.

But even though Doherty does not believe that the statue is crying, he said that the Virgin Mary does have plenty of reasons to cry.

“The blessed mother is crying for Iraq, for Haiti, for Northern Ireland, for the abused children, for all the pain, all the suffering,” he said.

Doherty, who has seen Mel Gibson’s “The Passion of the Christ” three times, said that devout Catholics may believe the statue is weeping because they want to find miracles amid all the troubles in the world.

In particular, Doherty pointed to the abuse of children by priests. “Now we’re off the pedestal forever,” he said wearing a “Return to Glory” Notre Dame t-shirt. “The church is being purged, which is good because we were too arrogant, too above the people.”

Some visitors, however, dismissed the statue’s tears less graciously.

“She’s got a runny nose too, it’s a miracle!” said one teenager who stopped by briefly. Later, two middle-aged women in black overcoats who refused to be identified, stepped out of their BMW M5 for a few minutes to take photographs and place a heart-shaped chocolate in the Virgin Mary’s hand.  “I came over to make a chocolate donation,” one of the women said, “She’s had a long couple of weeks…everybody needs chocolate.”

Doherty said the statue receives a couple hundred visitors a day, many of whom leave tokens. Rosary beads were draped over the statue’s hand. Bouquets of flowers, stuffed animals, prayer cards, notes and candles decorated the base.

Until Doherty posted a sign asking people not to leave money at the statue, visitors had been leaving that, too.

He said that some visitors were linking the statue’s tears with the possible closing of the church. “It has absolutely nothing to do with money. We don’t want money. One hundred and twenty dollars were left and we gave it all to the Battered Women’s Shelter.”

Sacred Heart Church has been identified as one of two Medford Catholic churches that might close this May because of a shortage of priests and a decrease in church attendance.

Doherty said that the statue had been erected long ago, but that it had been entirely white until a parishioner painted it a few years back. Now, it features a blue robe and flesh-colored paint on its face.

Although a recent photo of the statue in the church clearly showed grey, tear-like lines running down its cheeks, no such marks were visible on Friday.

One visitor, Jose Barahona, was disappointed that the darkness and rain prevented him from seeing the tears. He had heard about the crying statue on the local news. Nevertheless, he took pictures with his cellular phone and promised to return.

And people like Barahona will continue to visit regardless of the time of day or type of weather.

“I believe things like this happen. There’s something there. Some things bring you peace. It brings comfort,” Logrippo said. “It’s like for instance when...I took a picture and there was this flash of light everywhere in the print. There was a bright ring around everything. You can only hope.”

Diocesan officials have not named the statue a shrine.

Doherty invited a former employee of the FBI to analyze the tears but said that the test was “not worth $800.” Doherty said that he would rather give the money to local charities.

Harvard Catholic Students Association (CSA) member Francis X. Altiere ’04 said he was unaware of any plans for the group to visit the statue.

Doherty was uncertain whether people would visit the statue indefinitely. “This is not a shrine, this is not authentic. Maybe in fifty years, if people are still coming [it will be].”