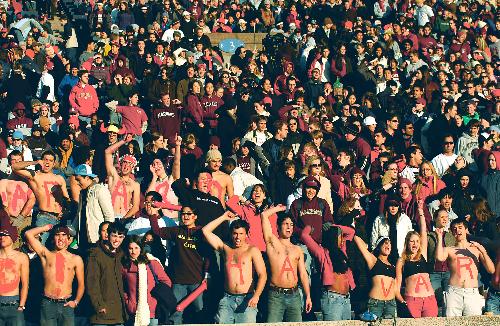 Harvard students show varying levels of support for the football team in proportion with their varying stages of undress. The temperature over the weekend hovered around 50 degrees Fahrenheit.
By Margaret W. Ho and Nicole B. Urken, Crimson Staff Writerss

Students may not have been funneling beer or guzzling from ice luges en masse, but Harvard and Yale undergraduates and alumni still managed to enjoy tailgates at the Game Saturday in New Haven.

Despite new restrictions that required tailgates to end by the beginning of the third quarter and prohibited drinking games and drinking paraphernalia, students said police enforcement was lax with tailgates extending well past halftime.

Organizers of the Currier House-Quincy House tailgate kept the dance music pumping well into the third-quarter, according to Currier House Committee (HoCo) Chair Jonathan C. Bardin ’06, who is also a Crimson editor. Though police came to shut down the music half-way through the third quarter, Bardin said they did not force Currier-Quincy tailgaters to leave.

“I saw less enforcement but I think that’s because there weren’t rules that were considered impractical, like no kegs and U-Hauls like at last year’s tailgate,” said Mary-Kate A. Burke ’06, who helped organize the Hasty Pudding tailgate.

Last year, in response to widespread concern about underage drinking and pressure from the Boston Police Department, the Harvard Office of Student Activities implemented a number of restrictions centralizing all undergraduate tailgating and banning U-Hauls entirely.

Last year’s tailgate also had admin-istration-organized beer distribution and alums and guests had to purchase tickets for admission. The College banned kegs when the Game was at Harvard in 2002 and 2004.

“I think both Harvard and Yale have found out that their policies with how to deal with this weekend need to be continually revisited,” said Yale College Council President Steven Syverud. ”I just think there needs to be less of a disconnect between the idea that you need to keep students from drinking so much that they put themselves in danger and the actual practice of drinking at the game.”

Some students said that they followed police requests to pack up even though police presence was more relaxed.

The close score of the game—which Harvard won 30-24 in triple overtime—also helped to lure students away from the tailgates after halftime.

“The game itself shut down our tailgate. Harvard-Yale is never close, and so this year’s game was exciting,” Bardin said.

Winthrop HoCo Chair Carrie H. Petri ’06, who is also a Crimson editor, said that while each House wanted to maintain its own sense of character, joint purchasing cut costs.

“I think for HoCos, it was a great day because in setting up and cleaning up, we worked together with six or seven HoCos and are a lot more closely aligned,” Mehta said.

Unlike last year in Cambridge, student group tailgates this year were separated from House tailgates.

“In some ways it was good to separate the two, so people were able to gravitate to what they were more comfortable with,” Mehta said. “But also we are one college and this is our chance to come together on one field and it’s a little disappointing that we didn’t have that opportunity.”

Seneca President Ayelet S. Lebovicz ’06 said the Seneca and nearby social organizations hosting tailgates did not seem to have any difficulties.

Dean of the College Benedict H. Gross ’71 said that he wanted to debrief with his staff before commenting on the tailgate this year and how it might affect next year’s Game. But Undergraduate Council President Matthew J. Glazer ’06 said that he hopes Harvard will take note of Yale’s successes this year.

“I think having U-Hauls and kegs contributed to a better organized and fun tailgate. Having kegs keeps people from binge drinking early on,” he said.