In Memoriam: The Golden Boy 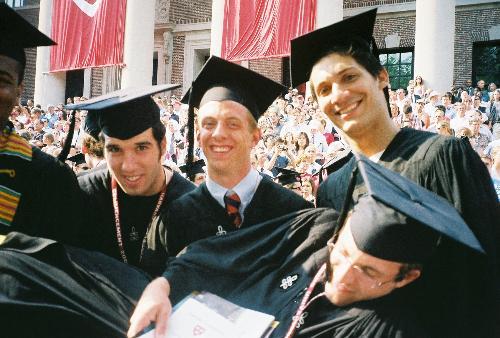 Paul Gilligan, my brother Daniel Seltzer and I used to joke, was the ultimate “golden boy.” It was an expression Dan and I had coined at Harvard, mostly for Paul, to describe someone who was the apple of his family’s eye, someone who carried the hopes of many on his shoulders, and someone who wore his enormous potential with a winning smile and an easy heart. He was the kind of person who, when he shook his hair, sent a shower of soft light into the world.

Everyone who talks about Paul during his time at Harvard remembers his achievements; the hours of work on bio textbooks that led to his magna cum laude graduation, the endless reps at the MAC, the late-night calls to rev up Eliot House for intramurals. But Paul was so much more than another overachiever. His greatest pleasure in life didn’t come from high marks and accolades, but from relationships in which laughter, loyalty, and adventure formed the kind of tight bonds about which most people can only dream. His family and friends adored and relied on him, and he loved them back with quiet and steadfast intensity. He listened carefully, and when he spoke, people paid attention.

To his sister Lindsey A. Gilligan ’08, Paul was the ideal older brother, the kind most desire but don’t have—loving, supportive, and protective without being stifling. I know from experience that every Eliot suite that housed Paul’s blocking group, testosterone-filled as they all were, had an open-door policy for sisters. Lindsey, Becky L. Smith ’08, and I came and went as frequently as the boys themselves. Paul gave Lindsey advice, encouragement, coaching, refuge from the tribulations of freshman year, and so much fun. Those who saw them together put them among the vaunted brother-sister pairs of history.

The boys called themselves “magic” when they were feeling happy (if there were three of them it was the magic three, if there were six it was the magic six), and it’s true that there was something magical in the way they lived together. Paul’s friendship with my brother Danny, with Steve J. Robbins ’05, with Rich J. Przekop ’05, and Bryan A. Smith ’05, and with Hani N. Elias ’05, and Ryan C. Lynch ’05, and Matt J. Rioth ’05 was the stuff of myth. They had more loyalty, more unity, and a better ability to laugh at each other and themselves than any group of friends I have seen before or will ever see again. Paul’s “boys” would gladly have taken a bullet for him, and that makes his tragic death so hard for them.

Together, the boys skied through the sub-zero Berkshire winds, enduring falls and frostbite with grins. My brother and I used to love to remember how Paul, usually the consummate athlete but only an amateur skier, was unafraid to lose a ski or two in his dogged pursuit of the expert trails. He was happy to whiz down the mountain with his friends and fully willing to end up in the snow instead of on it, if that’s what it took to have a good time.

That was the essence of Paul; competitive only to a point, he lived his life seriously but never took it too seriously. It was Paul, the driving force behind intramurals, who reminded his teammates when the going got rough that it was only an IM championship (they lost the football, basketball and volleyball championship matches in three consecutive nailbiters—all videotaped by Paul’s dad and score tallied by Lindsey). It was Paul who could play soccer with the stars and run like the wind, but didn’t mind going on a gentle bike-ride through Cambridge with Danny and Danny’s less-than-jockish sister. He even helped me convince my brother that “extreme” biking exploits in the woods were less preferable than actually sticking to something that resembled a trail.

A mixture of excellence and merriness marked the career of their blocking group. They were as brilliant at living as they were at school. Together, the boys climbed the old man of Portree, a rock formation on the Isle of Skye in Scotland. On that same trip, they rambled a coral beach, fed their leftover, hostel-cooked spaghetti to a flock of unsuspecting birds—and with their dashing looks and American accents delighted a different species of bird altogether.

Back in Cambridge, they took John Harvard’s and Pizzeria Uno by storm, happy not because they were seeing and being seen, but because they were enjoying themselves and whatever sporting event was being broadcast. They loved teasing each other—they loved to add the suffix “boy” to any insult—“What are you, Chemistry-final boy?” “Oh, so you’re sit-at-home-and-watch-American-Idol boy tonight?”

They peanut-buttered their neighbors’ mirrors, popped popcorn under each others’ beds, and in homage to Star Wars: Episode II, they wrapped Rich in a blanket and called him “Shmi Skywalker.” They dressed in blue at the First Chance Dance when everyone else was wearing red, yellow, and green, to symbolize the fact that they were “freezing out” Harvard ladies—and somehow they made it into FM’s gossip column for doing so. And legend has already embraced Paul and Steve’s unasked-for encore after Eliot won the Straus cup; after the festive ceremony and luncheon, they seized the microphones and sat back in lawn chairs. Their impromptu stand-up routine and reflections on IM glory echoed through the courtyard long after most residents were back to cramming for finals.

Good-natured humor was their diet, and Paul’s sense of it was sharp. It crept out from behind a sometimes-quiet exterior. Being jestingly insulted by Paul was always a triumph, because it meant that he was paying his usual careful attention to you and he saw you for who you were. An instant message from “Pauliegilli3” was enough to make anyone’s night. He was a force entirely for good.

Paul loved life with unmatched fierceness, and that’s why life without him will be so painful. His personality had blossomed in the past few years; he had become more extroverted, more assertive, more comfortable in his unique skin. Much of this was owed to his beautiful relationships with his parents and Lindsey and with Laura E. Spence ’04, and to the friendship of the boys. But most of it was just his own spirit coming into prominence—for those of us who watched him, it made us so proud.

The last few weeks were particularly special; in the Hudson valley, he and Danny caught, cleaned, and cooked a fish dinner the weekend after we graduated, they paddled around in an inflatable kayak, and with me and Lindsey, they sat outside listening to music, drinking the odd Corona, and chatting. We called it “Beach Party ’05” (“Thanksgiving Road Trip ’04” was our drive home for Thanksgiving). Last week, Paul wandered lower Manhattan with Steve, and planned to prep Lindsey for JV basketball tryouts. Everything was at an all-time high.

A.E. Housman’s “To an Athlete Dying Young,” with its tragic but heroic, laurel-crowned youth, is the poem that springs to mind when one think of Paul, and anyone who knew him should read it. Another poem by Pablo Neruda also recalls him to me. The poem contrasts a bright bunch of yellow flowers with the endless sea, and describes how one’s eye is drawn away from the sea’s deepness and vastness to the explosive, earth-bound beauty of the flowers. After all, “We are dust and to dust return/ in the end we’re / neither air, nor fire, nor water,/ just dirt…and maybe, some yellow flowers.”

Paul embodied those yellow flowers—that spark of gold that made anyone who saw it glad to be on this earth. He achieved in a lifetime what the poem reminds us most can never achieve. He was, above all, his family’s golden boy, but he threw light on anyone who touched him. We will miss him so much.

Sarah M. Seltzer ’05 was Magazine Chair of The Harvard Crimson in 2004. She was a dear friend of the late Paul F. Gilligan III ’05, and her brother Daniel L. Seltzer ’05 was Gilligan’s roommate.