Vandalism on the rise in Cambridge, and the target is public art. Why isn't anyone calling the cops? 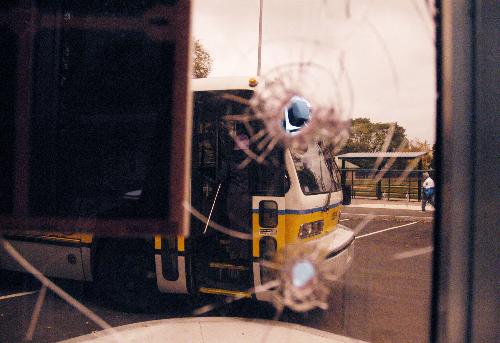 At the end of August, just before students began to arrive on campus, an unusual piece of graffiti appeared on Cowperwaithe Street.

Months before, a series of murals had been painted on the construction panels near Mather and Dunster Houses. One panel—

designed by Marianne F. Kaletzky ’08, who is also a Crimson Arts executive—featured four images of Mather House painted in psychedelic colors, in the style of Andy Warhol.

Someone decided to paint a message across this panel. It read: “That’s Right Kids, Andy Warhol was a Fag.”

Surprisingly, the incident is not completely unique. Across Cambridge, murals and other public art pieces have recently been subject to peculiar attacks.

A mural of fish painted on the stucco wall of a pool near Inman Square was defaced with giant white dollar signs. The muralist, Todd McKie, had been commissioned this past summer by the Cambridge Arts Council (CAC) for the purpose of decorating the outer and inner walls of the pool.

A bus shelter was also commissioned for the stop near Russell Field on Rindge Avenue and a series of rose and clear glass panels, covered by a corrugated tin roof, were put in place by minimalist sculptor Taylor Davis.

Two weeks after it arrived in the neighborhood, the shelter was smashed, leaving marks the size of bullet holes in the cracked panels.

In the early 1990s, Israeli artist Mierle Laderman Ukeles designed a large sculpture of a throne, accompanied by an image of a galaxy, in Daheny Park, once a dumpsite. In the past few years, her work has routinely been damaged. And a controversial mural on a traffic rotary near Walden Street, for which artist Wen-ti Tsen was reportedly paid $10,000 by the CAC, has been covered with pink paint.

Though this is an unusual spike, it’s part of a more unusual trend: the amount of vandalism specifically directed at art pieces in Cambridge has been on the rise over the past five years, according to the director and conservator for public arts at the CAC.

Yet the police rarely become involved, nor does there seem to be a particular effort to catch the perpetrators.

“Vandals are sometimes the people who live in that community, and it is their space also,” says Lillian Hsu, director of public art and exhibitions at the CAC. “People who sleep there day or night—even though others think that they shouldn’t be sleeping there—those people are also the public.

“It just raises the question about the interface of the issue of vandalism and the kinds of people who we don’t want using the space,” she says. “But it’s also about public ownership, because public space is owned by the public.”

None of the defaced pieces carried a controversial social message. Nor did any of the graffiti respond with easily interpretable critique.

Yet the act of defacement itself suggests one integral, often overlooked aspect of placing public art in Cambridge: anticipation of its own destruction.

The students who gathered to paint the Mather, Dunster and Leverett murals were well aware that their pieces could be vandalized, according to Evan R. Johnson ’06, one of the organizers, former publisher for The Crimson’s Fifteen Minutes magazine.

But he says they ultimately resigned themselves to the fact that there wasn’t really anything they could do. They applied sealant over the mural, but that was all.

When the graffiti on the Warhol-themed mural did appear, Michael S. Rooney ’07 posted a message about it to the Mather House e-mail listserv. The post generated some response, and the panel was shortly removed and the message painted over.

Rika Smith-McNally serves as the consulting conservator for the CAC, and her job involves responding to some of the ten to fifteen instances of vandalism to city-sponsored public art that occur each year.

Another part of her job is simply examining the site before the artist begins, and trying to find signs of the area’s inhabitants, such as broken glass on the ground. Then, she tries to help the artist determine which materials will be best suited to the site.

Hsu says that vandalism and prevention “is always part of the equation” from the beginning stages of planning.

Yet Smith-McNally insists that the artist always has the final say.

“I never try to change their mind. I feel that my job is to inform them,” she says. “If somebody really likes something a certain way, I feel that I can only inform them. I would say, ‘consider changing paints,’ but I would never say that you can’t make this art because it’s not going to last.”

Part of this is anticipating “passive” damage—generated by smokers, food waste, littering, and even skateboarding—as well as intentional defacement.

“But we don’t involve the police in trying to get them to find the people who damaged the property, at least not routinely,” Hsu says.

In the more extreme case of the Russell Field bus shelter, where the act seemed violent, she said that she did contact the police, but she adds that the majority of the vandalism that they deal with is very minor, such as smaller pieces of the art being broken, or small tags being painted on them.

WHERE IS THE LINE?

When Smith-McNally started working as conservator in 1998, she says that most damage she encountered seemed unintentional, or at least benign. But the situation has changed—she readily notes the five-year rise in vandalism.

Despite this trend, she adds that her first experience of seeing a tag on a piece of public artwork was not insulting, but in fact very moving.

Shortly after Sept. 11, 2001 she found the word HOPE spray-painted across Ukeles’ sculpture in Daheny Park.

She, along with others at the CAC, was reluctant to remove it, and only did so before the winter came.

And Hsu says that she is not totally certain of why these pieces in Cambridge have seemed like such attractive targets. Dollar signs are not a common tag around Cambridge, but that does not mean that the graffiti expressed anger about the mural itself.

“I’m not really thinking that people are objecting to the piece of artwork. It may have to do with the fact that the artist made it seem unique and especially beautiful and somehow it attracted the artist to destroy it,” Hsu says.

Yet in some cases, it is still difficult not to find the response personally demeaning.

Even disregarding the particularly offensive content of the Mather graffiti, Rooney says that he would have been disappointed to see someone writing over a student project.

“If it’s under a bridge or something, that’s just hijinx,” Rooney says. “But if it’s on the face of someone’s nice wall, something that they just put up, then it’s a little bit insulting.