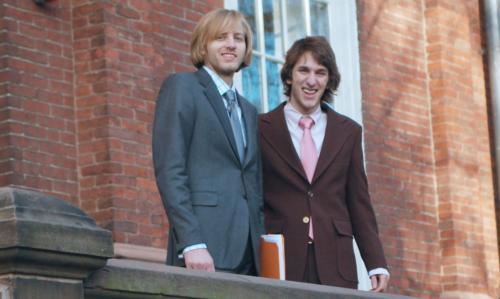 By Alexandra Hiatt and Rachel B Nolan, Contributing Writerss

Petersen-Sundquist had been projected as one of this year’s frontrunners, pitted against the Hadfield-Goldenberg ticket who received 1,025 votes. Ali Zaidi '08 and Edward Y. Lee '08 took 592 first-place votes.

Fewer votes were cast this year than the 3,896 cast in last year’s election.

Petersen, who is currently the chair of the UC’s Student Affairs Committee (SAC), received support from current UC President John S. Haddock ’07 and Vice President Annie R. Riley ’07, as well as an endorsement from the Harvard College Democrats.

He is the fifth SAC chair to be elected in the last seven presidential elections, according to UC Treasurer Ben W. Milder ’08.

Sundquist was the only sophomore to run for office this year. He, like Petersen, has served on the UC since his freshman year. He is vice chair for College Life on SAC.

During their campaign, Petersen and Sundquist emphasized a return to student advocacy. Their slogan, “It’s about students,” reflected a shift away from UC restructuring, the overarching theme of last year's election.

The ticket may also have benefited from an announcement by Dean of College Benedict H. Gross ’71 earlier this week that the administration would reimburse student groups for losses due to the gift tax. Petersen actively lobbied for the measure and has said he would continue to lobby until the tax is repealed.

—Check www.thecrimson.com for updates throughout the night.