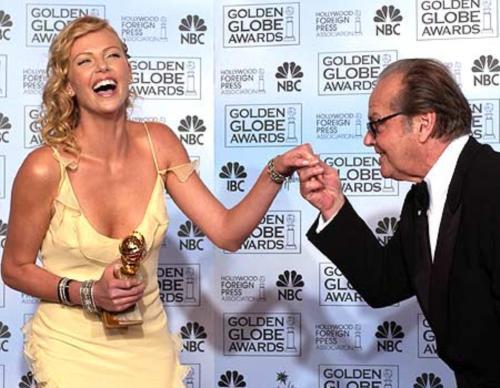 Christopher Walken and Charlize Theron were announced as the Hasty Pudding Theatricals' Man and Woman of the Year Thursday, joining Hollywood luminaries like Scarlett Johansson and Richard Gere, Katharine Hepburn and Mel Gibson—though not Paris Hilton.

Theron, a native of South Africa whose 2003 Oscar-winning performance in “Monster” was followed up with another nomination in 2005 for “North Country,” will be honored with a parade and the annual Woman of the Year Roast on Feb. 7.

The Man of the Year Roast for Walken—who won an Oscar in 1979 for his supporting role in “The Deer Hunter” and was nominated again in 2003 for his turn in “Catch Me if You Can”—will be on Feb. 15, immediately before the premiere performance of The Hasty Pudding’s 160th show, “Fable Attraction.”

In an announcement on the entertainment-news show Access Hollywood, a line of Pudding members, dressed in drag, ceremoniously passed a sheet with the names down to the society's co-producers, Joshua E. Lachter '09 and William M. Teslik '08, who then read them aloud.

In an interview by phone, Lachter praised Theron for her grace and talented acting.

“She’s just incredibly classy and seemed so glowing and vibrant in all her performances,” Lachter said, before adding, "except for in 'Monster,' for which she won an Academy Award.”

For that film, Theron reportedly gained 30 pounds to star as prostitute and serial killer Aileen Wuornos.

Lachter had similarly glowing words for Walken, whose career in Hollywood has spanned half a century.

“There are few people as legendary in Hollywood as Christopher Walken,” Lachter said, a member of The Crimson's Business department. Walken, in addition to his film career, has worked extensively in theater.

Talisa B. Friedman ’10, spokeswoman for the Pudding, added that the Walken appealed to the theatrical society because, "we like people who will be fun and don’t take themselves too seriously."

For Theron's visit in two weeks, Harvard Yard will be festooned with balloons, and a parade in her honor will wind through Harvard Square before the roast in the afternoon. Walken’s roast a week later will be a black-tie affair.

Both events are open to the public.

Two members of the Hasty Pudding will roast each honoree, and while Lachter would not reveal the specific jabs he and others would take at the honorees, he noted that Walken’s long and diverse career will provide ample material.

Traditionally, the Woman of the Year is serenaded by the Harvard a cappella group the Krokodiloes, and the Pitches sing for the Man of the Year.

In fact, Hilton is slated to receive an award on Feb. 6 from The Harvard Lampoon, a semi-secret Sorrento Square social organization that used to occasionally publish a so-called humor magazine.

The Lampoon award, which some newspapers reported would be called “The Hastiest Pudding of the Year,” will be known as the "Harvard Lampoon Woman of the Year" award.
—Staff writer Chelsea L. Shover can be reached at clshover@fas.harvard.edu.