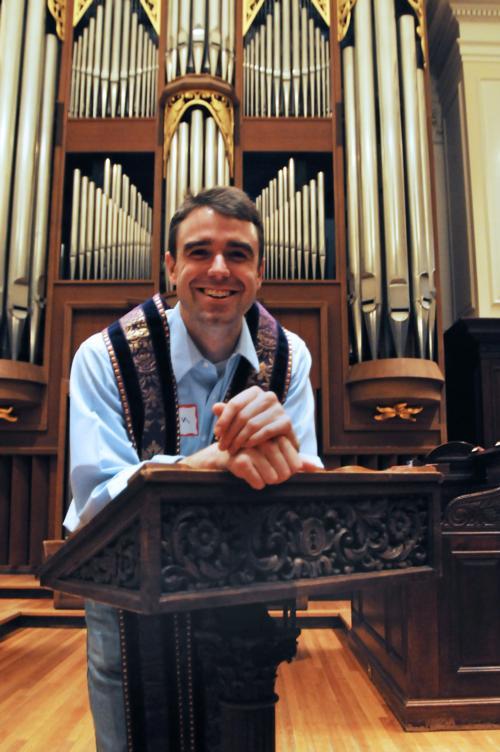 On a recent Sunday evening, Appleton Chapel in Harvard’s Memorial Church is lit with candles as a few dozen students file in, taking their seats in the pews usually reserved for the church’s choir. The 9 p.m. service starts, and hymns fill the church. With a few chords hanging in the air, Rev. Jonathan C. Page ’02 takes his place at the lectern to deliver his homily.

Page has eschewed traditional chaplain’s raiments, preferring an Oxford shirt and jeans. And as he begins to describe his personal experience with Lent as a teenager, Page moves from behind the lectern and paces Oprah-style before the semi-circle, exhorting the students to translate the liturgical season of fasting and prayer to their daily lives.

“Why not wake up 15 minutes early and meditate before class?” Page asks. “Or try fasting for a day?”

Page, who is the Epps Fellow and Chaplain to Harvard College, returned to Cambridge from Yale Divinity School this fall with one overarching mission: to make Memorial Church more relevant to undergraduates.

“I want students to be able to say, ‘This is our church in addition to being the University’s church,’” he says.

But Page’s new evening service reveals the fundamental tensions in his project. The relaxed, contemporary ceremony is a stark contrast to Memorial Church’s standard, tradition-bound offerings. And Page’s effort comes at a time when the rise of evangelical Christianity at Harvard has helped lead more and more students to worship off campus.

HEEDING THE CALL
Growing up in Wellesley, Mass., Page was raised in the United Church of Christ, a mainline Protestant tradition.

A graduate of The Roxbury Latin School—a prestigious Boston all-boys’ school—Page describes himself as having been a “fairly intense teenager.”

“I was always asking big questions about meaning,” Page says. “What do I believe in? How far would I push it? Do my beliefs really go to the core of my being?”

At Harvard, Page says he started as a Comparative Religion concentrator, but eventually transferred to the History department to focus on the roots of early Christianity. He attended services at Memorial Church about once a month, but says he never felt a strong connection.

“I didn’t feel a close affiliation with any of the denominational groups, so I came to Mem Church,” he says. “But I still thought that Mem Church could be doing so much more with undergraduates. There was a sense of distance.”

“After that moment, I sat back and thought, ‘Well, I’m crazy!’ But religious questions have always dogged me in my life,” Page says. “So I decided worst case scenario, I go to divinity school and I figure out what I believe—and maybe I don’t believe anything, but at least I’ll know.”

Page left the bank and applied to Yale Divinity School. That year, he says, he wrote a draft of a book about Eton and tutored high school students. To supplement his income, he says he also worked as a security guard in East Somerville and as a liquor salesman, selling vodka to bars and liquor stores in Boston.

At Yale, Page says he reaffirmed his faith and decided he wanted to become ordained. As he was preparing to graduate, he ran into Peter J. Gomes, who has served as the minister of Memorial Church since 1970. Page says Gomes encouraged him to apply for the Epps fellowship, which sponsors a newly ordained seminarian to serve as Memorial Church’s chaplain to the undergraduate community for two years. Page calls it a dream job.

“If you’re going to be an associate in a church, why not be an associate at a place like Harvard with Peter Gomes as your boss and all these great resources and great students to work with?” Page says.

TRYING TO BE ‘HARVARD’
Built to commemorate Harvard graduates who died in World War I, Memorial Church stands at the center of the Yard, its bells summoning students to class. Nondenominationally Protestant, the Church advertises itself as “a house of prayer for all people.”

Page estimates that the congregation on Sunday morning usually runs between 250 and 300, but that only 20 of those walking through the doors are students.

The rest of the pews, Page says, are filled with older Cambridge and Boston residents, including Harvard alumni and professors.

“The congregation usually wears coat and tie.” Page says. “They come to hear good preaching and great music, which tends to be fairly classical in genre and very church-y.”

The liturgy of the service—its order of worship—has not changed since 1932, according to Page. He said he believes this continuity stems from Gomes’ vision of Memorial Church.

“Part of being a minister at a place like Harvard is to try to be Harvard,” he says. “I think Professor Gomes has always tried to have Memorial Church be a certain way as a representation of what Harvard should be.”

Gomes is on leave this term and declined an interview through his assistant. Associate Minister Dorothy A. Austin, who has led the church in Gomes’ absence, could not be reached for an interview.

Page envisions the new evening worship as a low-key, lively antidote to the traditional morning service and aims to attract students who do not regularly attend church. Held in Appleton Chapel instead of the larger sanctuary, the service is shorter and less tied to liturgy. The worship features contemporary music and a more informal homily. Page dresses informally, usually in jeans, and dons a stole—a long vestment worn over the shoulders—only for the Eucharist.

Miles W. Canaday ’10, a Memorial Church usher, says he finds the informal atmosphere to be a good change of pace.

“It has an entirely different feel at night with only students there,” he says.

“The people conducting the service are young, Jon included,” he says. “They understand the various challenges that students face on campus better than someone who graduated 30 or 40 years ago.”

But despite this nontraditional focus, Page—who has been holding the service for three weeks—says that filling seats on Sunday evenings has been a challenge, and so far each service has drawn only about 15 to 30 students.

COMPETING CLAIMS
One reason may be that there are many nearby churches of various Christian faiths that attract Harvard students.

The latter group is gaining ground at Harvard—former University President Lawrence H. Summers said in a speech two years ago that the number of evangelical students at Harvard had doubled in the past decade.

Some of the main beneficiaries of this growth have been the College’s evangelical student groups, including Athletes in Action (AIA), a fellowship of Christian athletes whose mission is “to know Christ, to grow in Christ, and to make Christ known.”

Sarah E. Bancroft ’09, one of AIA’s leaders, was brought up as an Episcopalian in Baltimore, but says she joined a friend’s Presbyterian youth group during high school. She says she was looking for the same type of religious community when she came to Harvard.

Bancroft, who plays Varsity Lacrosse, says she attended Memorial Church with her parents during her first weekend at Harvard, but has not worshipped there since.

“Harvard can be intimidating for conservative Christians,” she says. “But teams are very accepting communities, so having a team and AIA, you end up feeling a part of things.”

She says she does not know of any AIA members that attend Memorial Church, and it does not appear on the list of places of worship recommended on the AIA website, although Bancroft says it is on the initial list given to new members in the fall.

“In choosing Park Street, I was really looking for a church centered on Christ and the Bible,” she says. “I didn’t feel the same grounding in those two things at Mem Church, or at least not as strongly.”

J. Neal Stephens ’09, an AIA leader who identifies as Southern Baptist, says he worshipped at Memorial Church a few times during his freshman year as he was deciding what church to attend. He eventually settled on Park Street.

“I identified with [Memorial Church’s] very traditional service coming from a Southern Baptist background, but I wanted a church I felt was in line with my beliefs,” Stephens says. “I connected with Park Street and the sense of community.”

A PREACHER WITH A FACEBOOK PAGE
Since returning to campus, Page has attracted a small but fiercely loyal following. He counts many undergraduates among his friends and has an active Facebook profile.

Wintner says he met Page a few years ago through the crew team. Wintner rows on the Varsity heavyweight boat, and Page walked onto the team as an undergraduate.

Wintner says that now that Page is back at Harvard, they talk a few times a week.

“The amount of effort Jon puts into the things he’s trying to do to revive student life at Mem Church is truly remarkable,” Wintner says. “He spends a lot of time thinking about what will really appeal to students, or trying to stimulate discussion, or even meeting people at various places.”

And Page remains optimistic about the new student service even as Memorial Church falls out of favor with Christian undergraduates and other groups gain momentum.

“I’m praying that people will like it, that it will hit a chord, and most of all, I’m praying that the spirit of God will be there,” he says. “And if it doesn’t work, back to the drawing board! I was ordained a month and a half ago!”

—Staff writer Nini S. Moorhead can be reached at moorhead@fas.harvard.edu.