Heeding the Call of the NFL 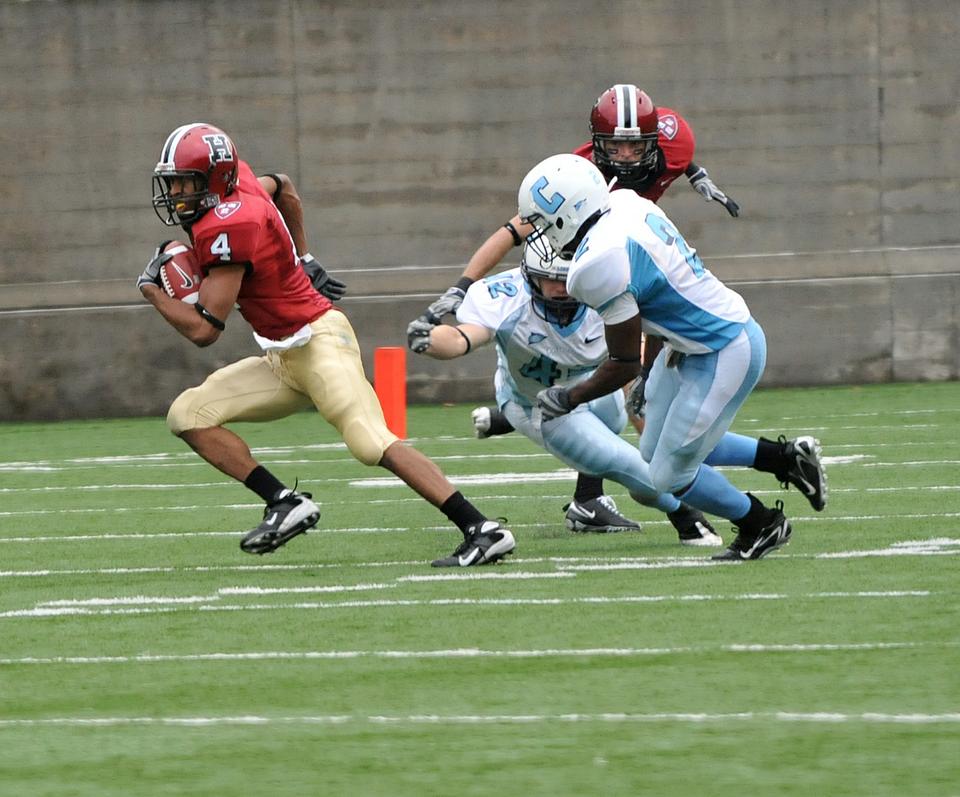 By Scott A. Sherman, Contributing Writer

Giving up on a dream is never an easy thing to do. Just ask Andrew Berry ’09, Harvard’s three-time All-Ivy cornerback and 2008 preseason All-American.

A star on and off the field, Berry also ranked among his graduating class’ top five percent in GPA and was Director of the Cambridge Youth Enrichment Program during his time at Harvard.

Though he dreamed of playing professional football, Berry was not selected by a pro team in the highly-competitive NFL draft last April. He received a tryout offer from the Washington Redskins, but almost immediately after he arrived at their minicamp, he was sent home with a herniated disk in his back.

Berry knew then that his dream of playing pro ball was over.

The previous summer, he had worked in trading at Goldman Sachs, where he could have continued to excel once he decided to end his playing career.

One day, however, he received a call from the Indianapolis Colts, who had heard about his time at Harvard, his injury, and wanted to interview him for a job in their player personnel department.

Berry was faced with a tough decision—take the potentially more lucrative Wall Street offer, or work in football, his passion, even if it wasn’t as a player.

“It was a difficult decision, from the aspect that I’d spent my time in the summer at Goldman Sachs and the career opportunities and support I had received there I thought were really nice,” Berry says. “But at the end of the day, I felt compelled to take the job with the Colts because that’s where my passion [was]. From that point, once I saw everything fall into place, it was pretty easy to pull the trigger.”

Berry says that the biggest influences on his decision were the people he’d interviewed with in Indianapolis, because listening to them talk about working in the organization had a strong impact on him.

He also received support from his parents, who told him to follow his heart and do what he felt compelled to do.

For someone with a goal of becoming a director of player personnel or even a general manager one day, Berry felt as if he couldn’t turn down the opportunity to enter the industry at such a young age.

Williams was recently faced with a dilemma similar to Berry’s: apply to law school, or continue focusing on football in an attempt to get drafted and make it in the NFL. And like Berry, Williams made the decision to follow his heart, and keep doing what he loves.

“It wasn’t that hard of a decision to make,” the senior says. “Football’s been a passion of mine for a long time. I’ve been playing since I was in third grade, and I want to play for as long as I can.”

Berry, judging from experience, says he thinks Williams is making the right choice.

Both players agree that law school will always be there if things don’t work out for Williams, but if they do, the result could be lucrative. While first-year attorneys earn an average of $125,000, an NFL fifth-round draft pick’s first-year salary averages $500,000.

Though Berry’s Harvard degree certainly helped him get a job on Wall Street, the former gridiron standout knows that playing in the Ivy League made it tougher to make it in the NFL.

“Undoubtedly, it’s a little more difficult to make it as an athlete, just because you’re not playing at the pinnacle of competition,” Berry says. “You’re not playing LSU or Tennessee on a weekly basis.”

But Williams knows that other options will be there, like they were for his teammate, if things don’t work out on the field.

“I can always go back to law school, but this opportunity will not present itself again,” says Williams, who will take the LSATs after the season ends. “This is my opportunity if I want to play in the NFL.”

Football captain Carl Ehrlich adds that his two teammates’ decisions might have been easier than some have imagined.

“I think what’s most interesting about both of them...they don’t really consider what they are doing as giving something up,” Ehrlich writes in an e-mail. “They both have a long relationship with football and a deep respect for the game that has attracted them to this field.”

While whether Williams’ risk will pay off is still up in the air, Berry says he has no regrets.

“Confucius said, ‘If you choose a job you love, you’ll never work a day in your life,’” he says. “I really feel that’s the case here.”