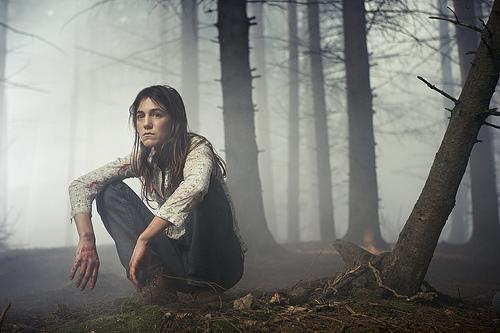 Lars von Trier's controversial horror film "Antichrist" follows a nameless husband and wife as they come to violent terms with the death of their son.
By Ryan J. Meehan, Crimson Staff Writer

It’s an almost hallucinatory sense of confusion that pervades Lars Von Trier’s latest feature, the dubiously titled “Antichrist,” in its viewing experience as in its very composition. Already infamous for its disastrous reception at this summer’s Cannes Film Festival, the film seemed destined for a sort of immortality even before it hit worldwide release this month: the immortality of perpetual debate. Outrage circulated over controversy-stoking scenes of castration and genital self-mutilation, misogynist diatribe, and stultifying psychoanalytic pedantry. Hilarity abounded over a woodland fox that inexplicably speaks.

To be sure, “Antichrist” is rife with all of these things. Just as sure, the film never provides—nor so much as even suggests—a measure of forward-motion that would constitute a remotely critical synthesis for all the bizarre, absurd, or utterly inane things that manage to find their way into the 100 minutes that comprise it. Instead, Von Trier seems satisfied with a set of auteuristic half-measures intended to flummox or thwart critical impingement. When Willem Dafoe’s unnamed therapist-husband character exclaims toward the end of his wife’s treatment, “You don’t have to understand me, just trust me!” it may as well be Von Trier’s claim for the entire film. But the gesture backfires, and instead of the subject of endless discussion that it aspires to be, “Antichrist” is merely an entertaining, if catastrophically ham-fisted horror film.

The ostensible plot is ripped right out of the J-horror handbook: a young married couple travel to an isolated woodland retreat to deal with the grief following their toddler son’s death. In the film’s highly-stylized prologue, the black and white, slow-motion sequence of Dafoe and his wife, played by Charlotte Gainsbourg, making intense and explicit love is intercut with their son wandering into the room, witnessing their coitus, climbing out an open window, and falling. The image of the child falling in the snow-filled sky to the sound of Händel’s “Rinaldo” is just one of the scenes that impress—if only in passing—in “Antichrist,” and builds credit for the film to develop, if nothing else. But this image of a child falling in space, evocative of the fertile—however unambitious—dynamic of existential dread, is not the one Von Trier adopts for the propulsive force at the heart of the film. Instead, it is the satisfied, almost sly look that the child gives the camera as he turns from the scene of his parents—Freud’s “primal scene”—that remains the only concept throughout all of “Antichrist” that stands, free of contradiction, parody, or comment.

From here, Von Trier fashions a conceit from the juxtaposition of modern psychotherapy and bald psychoanalytic symbols. The couple’s respective reactions to grief—Dafoe’s intellectual distance manifest in his treatment of Gainsbourg, whose psychic pain becomes physical—exaggerate at a rate that reaches the suspenseful around the second act, and plows right through to the comically ridiculous by the third. Gainsbourg’s agonizing depression, it seems, is demonic rather than psychological—the wolf whose psychiatric sheep’s clothing leads Dafoe’s analyst (equipped with hypnosis, trust exercises, and thought-pyramids) into the heart of a forest subtly titled Eden. In nature, “Satan’s Church” as she calls it, the world is destroying itself and shows no mean intention of destroying them in the process. A dead calf swings from a fawn’s hindquarters; a baby bird is swarmed by ants and devoured by a hawk. It’s enough to believe that Von Trier is playing an enormous joke on his audience when Gainsbourg remarks grinningly to her husband, “Dreams are of no interest to modern psychology. Freud is dead, isn’t he?” A half hour of ejaculated blood and severed female anatomy later, “Antichrist” has done as much as show that if Freud isn’t dead, he’s certainly fair game for some extreme and rather thickheaded interpretations.

The first half of the film is essentially a horror film’s buildup toward dramatic tension, and it’s done effectively: eerily lit time-lapse nature footage punctuated by waves of white noise and color-saturated, slow-motion shots create a nightmarish atmosphere for the carnage to unfold in. The alternation between handheld and dollied camera is seamless, and Von Trier even experiments with lenses in the former case, making for an especially distorted register in some of the film’s most intense moments. But finding the natural extreme of a career that counts a visually stirring and intellectually stunted film like 1991’s “Europa” as its peak leaves “Antichrist” on the level of an aesthetically-conscious “Evil Dead.” The second half is a mixture of out-loud laughable dialogue and uncomfortable gore (an exceptional combination of the two, when the talking fox devours its own entrails) that, however unintentionally, makes for terrific popcorn-viewing.

So what begins as confusion wavers and then diminishes into the reality: “Antichrist” is an embarrassment audacious enough to reassure only a man like Lars Von Trier. A self-styled radical better known for narrative transgression and the outmoded Dogme 95 manifesto than any one particular film, Von Trier reveals himself finally and totally in “Antichrist” as the spoiled child of the art house: an auteur who insists that his films merely stand as pieces around which he himself can be discussed. In so blatantly passing off exploitation as art, the lesson that “Antichrist” teaches filmmakers is that bombastic garbage is still garbage.

—Staff writer Ryan J. Meehan can be reached at rmeehan@fas.harvard.edu.