Welcome to the Reel World 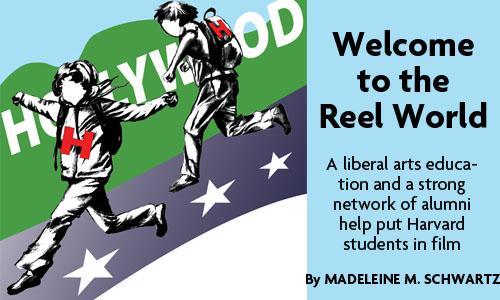 While his classmates were completing problem sets and writing papers in the library, Jonathan C. Mostow ’83 was staying up late in the Freshman Union, loading film and editing footage until the early hours of the morning. “My passion was making film,” he said.

Mostow’s passion has become a lucrative career. The director of “Terminator 3” and the upcoming “Swiss Family Robinson” is one of many alums who have moved out West to strike gold in Hollywood. From Darren S. Aronofsky ’91—director of the Academy Award-nominated “The Wrestler”—to Jeffrey A. Zucker ’86—former president of the Crimson and current president and CEO of NBC— alums of the College pervade the entertainment industry, writing, directing and producing successful mainstream and independent works.

And while aspiring filmmakers may not graduate with the level of technical competency as their peers at the film schools at the University of Southern California (USC) or New York University (NYU), Harvard is still able to enable strong Hollywood careers through the broad, liberal arts education it encourages and the connections it provides.

For current students looking to work in Hollywood, the Harvard name opens doors to an industry that has proven notoriously hard to crack.

“Harvard is an invaluable resource. It creates an instant connect and instant trust,” said Madeleine Bennett ’11, president of the undergraduate chapter of Harvardwood, a non-profit organization for Harvard students, alums, and staff interested in careers on or behind the silver screen.

But the formalized, extensive alumni network that now supports current students was not always in place. Years ago, informal networks were predominant—and for some alums, these structures remain in use more today.

Nevertheless, as students grapple with a hemorrhaging economy, personal connections of any sort borne of a Harvard-affiliation may prove increasingly important.

THE ADVANTAGES OF AN ELITE EDUCATION

Instead of solely focusing on the mechanics of the trade, students at the College are forced to divide their time between the application of their art and the books.

Many current filmmakers, however, elected to focus on Harvard’s other curricular resources during their undergraduate years, even when they knew that cinema was the next step.

“I knew coming in that I was going to spend my whole life doing film, and I wanted to spend my time at college doing something else,” said screenwriter and director Marshall I. Lewy ’99, whose movie “Blue State” premiered at the Tribeca Film Festival in 2007. At Harvard, Lewy shied away from the Department of Visual and Environmental Studies, instead delving into Russian and American novels and earning a degree in History and Literature.

Lewy chose to later complement his undergraduate experience with a Masters of Fine Arts from Columbia, but he cites his broad Harvard education as providing him with important perspective for his work today. “I’m working on a fair number of projects where history comes into play,” he said.

Other aspiring filmmakers opt to make their art the focus of their college education. But even at its most technical, Harvard’s film program is not pre-professional. The VES department, through the courses it offers, requires students to complement their practical knowledge of the field with a strong philosophical understanding of the craft.

“Students use the camera to explore and interrogate the world for the stories, issues and characters it might reveal,” explained VES Professor Robb Moss, acting head of undergraduate studies and film production professor.

While much of the program centers on the hands-on aspects of cinema—such as the complexities of working with 16mm film—its curriculum forces students to draw upon cinematic history and theory, said Moss.

“The [film] program socializes film and...integrates it into the rest of my learning,” said Isidore M. T. Bethel ’11, a VES concentrator who recently completed his first feature film, “Terminus.”

Students said that VES’s approach to film allows them to acquire both the competence and the resolve necessary for cinema and that the department encourages students to take responsibility for their work.

“From beginning to end, what you make is yours,” said Rachel M. Douglas ’09, a VES concentrator and Crimson editor.

Whereas Harvard’s program approaches production from a survey-like perspective, film schools often divide areas of study by sets of filmmaking skills, such as screenwriting and acting.

“If you know you want to be a cinematographer or a sound editor... you have a great opportunity [at USC] to get lots of practical experience in those areas,” said Justin Wilson, USC’s Director of Alumni Relations.

This has practical importance.

“You have got something to show when you leave [school],” said Mark J. Harris ’63, Distinguished Professor in USC’s School of Cinematic Arts and three-time Academy Award winning documentary maker.

But according to Harris, although a more technical education strengthens practical skills, it may detract from students’ creative ability.

“My own bias is that you shouldn’t go to film school as an undergraduate,” Harris said. “It’s a better idea to go to a liberal arts school and develop something to say.”

While Harvard’s liberal arts education may provide the intellectual rudiments helpful for aspiring filmmakers, it predictably has far fewer alumni in Hollywood than film schools. Wilson estimated that the vast majority of USC’s graduates are concentrated in Southern California.

“People talk of the ‘USC mafia.’ We like to think of it more as a family,” said Wilson. “If you look at a lot of projects in film, television, etc. many USC alumni have worked on them.” The school itself cultivates these professional relationships with alumni events and job listings, he said.

Harvardwood—financially independent of the University—attempts to promote a similar film community for students and alums. Founded in 1999 by Mia E. Riverton ’99, the organization provides a centralized hub through which its approximately 3000 members can forge new connections, facilitating the transition from the classroom to the studio.

Harvardwood arranges conferences and seminars while compiling alumni contact information in an online directory, accessible to all members.

Harvardwood 101—a yearly trip to Los Angeles over that takes place over intersession—offers two dozen current students a glimpse at the industry they hope to enter.

Last month, students on the trip met with a wide range of professionals—from agents and writers to Robert M. Kraft ’76, the chief executive of Fox Music.

“We were bussed around from studio to studio, panel to panel in order to experience a broad cross-section of Hollywood,” said Molly O. Fitzpatrick ’11.

As they learned about the ins and outs of Hollywood (“Screaming bosses are a big thing out there,” said Fitzpatrick), students also tried their hand at networking.

“The whole trip is about meeting people, specifically Harvard alums,” said Maxwell A. Newman-Plotnick ’11, a VES concentrator who also traveled to Los Angeles. He said he may use the connections established on the trip to help him find an internship this summer.

Today, $40 in annual dues to Harvardwood unveils myriad potential connections, but in the mid-80s—when the current generation of Hollywood executives and producers moved to Hollywood after graduation—few previous alums had established themselves in the industry. The Harvard diploma meant little more than the absence of a film degree.

“When I first came out here, you could count the Harvard people on two hands,” Mostow said. “Moving to Hollywood was like running off to join the circus.”

The networks of these early pioneers were more closed and exclusive than they are at present. Their connections stemmed from shared college experiences, such as House affiliation and extracurriculars, rather than any official organization.

One such focal point was the Harvard Lampoon, a semi-secret Sorrento Square social organization that used to occasionally publish a so-called humor magazine. The Lampoon name, Mostow said, was a Hollywood calling card. It granted access to a social group of Hollywood professionals—mainly comedy writers—including admittance to a weekly poker night.

For some of the more seasoned alums, these strong personal networks may have superceded their affiliation with Harvardwood.

While Mostow has collaborated with his college roommate on many films, including “The Swiss Family Robinson,” he does not belong to Harvardwood. And R.J. Cutler, a filmmaker who recently won the Grand Jury Prize for Excellence in Cinematography for a U.S. documentary, works with Harvard alums on most of his films but had never even heard of the group.

As Hollywood fades in the face of a shrinking economy, this Harvard network may prove a valuable asset for filmmakers.

“When the situation changes economically, most people network more,” said Benny J. Belvin, one of two OCS counselors who accompanied Harvardwood on their trip.

Although it is too early to fully determine the effects of the shriveling market on the film industry, disappearing funds and dwindling deals have raised fears across Hollywood. Current filmmakers have said they plan to choose their future projects by focusing on scripts with the most box office potential.

“There is an intense amount of focus on the projects that are truly worthwhile,” said producer Benjamin S. Forkner ’01, whose film “The Killing Room” premiered at this year’s Sundance.

But growing uncertainty in Hollywood is not enough to curb the allure of the silver screen for some current undergraduates. “I want to be a film director,” said Newman-Plotnick, “although I am keenly aware that it is extraordinarily hard to find a job in that industry [even] in a good economy.”

And despite the dimming lights, the Harvard presence in Hollywood continues to grow. “Now more than ever,” Lewy said, “Hollywood is not the fringe direction for Harvard graduates that it was 20 years ago.”

—Anita B. Hofschneider contributed to the reporting of this story. —Staff writer Madeleine M. Schwartz can be reached at mschwart@fas.harvard.edu.