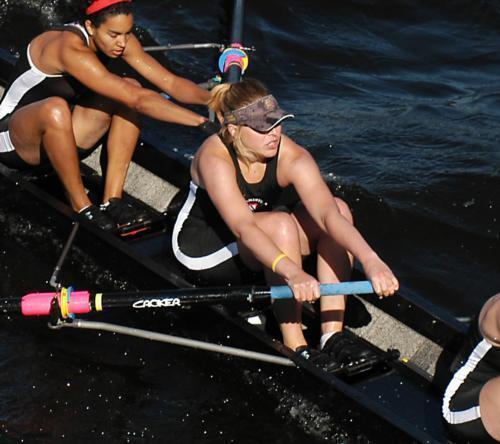 Esther Lofgren ‘07-09 has had to overcome numerous obstacles throughout her rowing career, but each time, she has responded from her disappointments. Her latest accomplishment is winning the gold medal for the U.S. in the eight at the World Championships.
By Kevin T. Chen, Crimson Staff Writer

In 2007, the former All-American Radcliffe heavyweight rower took a year-long leave of absence, hoping to land a seat on the Olympics team in Beijing. But whereas Lofgren dominated her collegiate competition, the 6’3’’ rower found herself falling behind her peers.

“The training and competitiveness of the squad were much more rigorous than they’d been the other years I’d tried out for the team,” Lofgren wrote in an email to The Crimson. “It was very humbling to go from being considered reasonably fast in college, and even on the previous national teams, to seeing my name at the bottom of every results sheet. But I kept pushing myself, got fit, and didn’t give up. I ended up getting ‘called up’ when a couple of girls got injured late in the season.”

And though Lofgren did not claim a starting seat on the Olympic eight boat in Beijing, she came back to her Radcliffe team even more motivated to succeed.

“She really put a lot of effort into that run,” said former Radcliffe heavyweight captain Christine Baugh ’10. “It was difficult for her to be so close and fall slightly short, but she came back even more determined than ever. Not only did she improve herself, she came back to Harvard and Radcliffe to make our team better. She was so selfless, and she really brought everybody up and coached everybody to become better.”

As a member of the U.S. rowing team that won the gold medal in the eight at last week’s World Rowing Championships, Lofgren will now set her sights on the biggest prize in all of sports: Olympic gold.

Even with parents who were both elite rowers, Lofgren’s first love was volleyball.

The former volleyball star attended Newport Harbor High in Newport Beach, Calif., a school well known for churning out volleyball talent such as April Ross and Misty May.

“Besides height, I didn’t really have any of the natural gifts that many of the other players did, although I had a ton of determination,” Lofgren wrote. “If I didn’t have the best vertical, I made up for it by practicing my serve for hours every afternoon.”

While some schools recruited Lofgren to play volleyball, her parents’ past eventually caught up with her, and Lofgren began to look more closely at rowing.

“The first day I went down to the boathouse with my best friend to try out the sport he’d just started and was so excited about, I was pretty much hooked from the beginning,” Lofgren wrote.

STEPPING STONES ON THE WATER

With rowing now the main priority, Lofgren joined the Radcliffe heavyweights as a rower with a unique blend of height, strength, rowing genes, and work ethic. Despite finishing sixth at the 2003 US Youth Rowing Invitational, Lofgren considered herself relatively unpolished.

“[Coach] Liz O’Leary [and] assistant coaches Cory Bosworth and Kate Woll helped me navigate the things I wanted to accomplish both with my studies and in the sport,” Lofgren wrote. “Although I’d learned to row in high school, I learned how to actually move a boat while at Radcliffe!”

With the guidance of O’Leary, Lofgren quickly blossomed into an elite rower on the Charles.

“Rowing is a sport where it just takes miles and miles of practice, you just have to put in your time and do the training,” O’Leary said. “She works hard in our workouts as a team, but she’ll come into the boathouse on a Sunday afternoon and sit in the erg by herself. She just has that look in her eyes that she wants to be successful.”

But even with the numerous accolades she picked up in college, including two appearances on the U.S. Under-23 National Team—Lofgren took home a gold medal in the eight at the 2006 World Rowing Championships—the rower also faced obstacles throughout her collegiate career that were often discouraging and frustrating.

Before her stint at the 2008 Olympics trial, Lofgren took the fall semester off in 2004.

To keep up with her rowing, she competed for a club team, only to find out that her participation, as dictated by NCAA rules, prevented her from competing for Radcliffe once she returned in the spring.

“For her, it was crushing,” O’Leary said. “You train all winter, but because of the rules, she couldn’t do it. But she still came to all the practices. When she couldn’t be in the boat, she was still there for the team. It was a pretty remarkable level of commitment, she kept training. Those are the kind of potholes to recover from.”

“She did have her failures, some rowing-wise, some not, but she was always willing to pick herself back up and come back hard again,” O’Leary added.

In true Esther Lofgren fashion, the rower responded to her setbacks, capping off her collegiate career with a silver medal at the 2009 Eastern Sprints.

“My most memorable experience rowing for Radcliffe was our race at Eastern Sprints,” Lofgren wrote. “We found our rhythm and the power in our legs and just went. That silver medal—a half-second behind Yale, a second ahead of Princeton—was so sweet to win, and I was so happy to be a part of such a fun and fast crew.”

As pair partners with Lofgren for most of her junior year, Baugh also cited the race as one to remember.

“It was one of the best races in my memory because I got to row next to Esther,” Baugh said. “She always had faith in me…and I definitely looked up to her.”

A TASTE OF GOLD

Upon graduation, Lofgren found herself out on the water pursuing a professional career in crew.

With a refined understanding of the sport from her Radcliffe rowing days, Lofgren has spent the last two years competing for the US Rowing team, earning a silver medal in the four at the 2009 World Rowing Championships and winning gold in the eight at the 2010 Rowing World Cup stop in Lucerne, Italy.

Last week, on Lake Karapiro in New Zealand, Lofgren earned her first gold medal in the eight at the World Rowing Championships.

Lofgren and her U.S. teammates pulled away from their competitors in the third 500 meters to earn the coveted gold in 6:12.42, 3.7 seconds ahead of runner-up Canada.

For Lofgren, becoming a world champion has been one of the defining moments of her young career so far.

“Winning gold at Lake Karapiro was an incredible, wonderful, amazing experience,” Lofgren wrote. “The race itself was exciting—we were able to keep executing our race plan, and kept moving on the field and building momentum as we raced towards the finish line. It was absolutely a team effort—we made a commitment to each other that at no point in the race were we going to be satisfied with where we were.”

“It makes me very proud of her accomplishments,” O’Leary said. “You always like to think that you play a part in helping her along the way, but in the end, it always boils down to all the work she put in over a long period of time.”

Though preparations for a 2012 Olympics run lie in the near future, last week’s achievement is just beginning to sink in.

“Waiting for the awards ceremony, I found myself in tears—it hadn’t hit home that we’d won, that all of my work over the last five years and especially my training since joining the squad in Princeton last October had resulted in earning a seat in the boat I’ve dreamed of rowing in,” Lofgren wrote in her blog. “We [had] achieved the goal we’d all set for ourselves. It was a powerful and emotional realization, and I was so happy to be able to share my joy with the women with whom I’d achieved these things.”

Rightfully so, the athlete who has worked the hardest has earned success competing at the highest level.

But as Esther Lofgren would say, it certainly didn’t come without some obstacles to overcome.