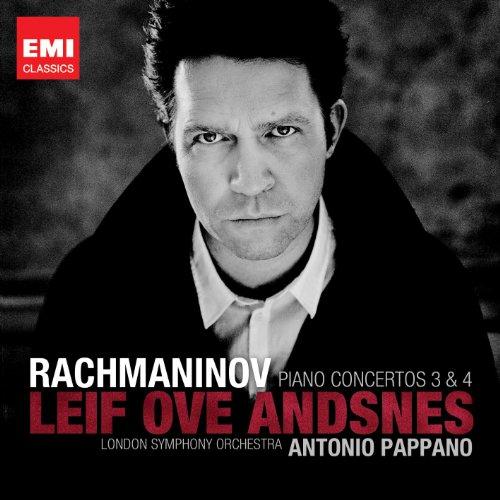 Leif Ove Andsnes’s latest album, featuring the third and fourth Piano Concertos of Sergei Rachmaninov completes Andsnes’s cycle of the Rachmaninov concertos, which he began in 2005. Known primarily as a proponent of composer Edvard Grieg, the Norwegian pianist made headlines last year when he collaborated with conceptual artist Robin Rhode on “Pictures Reframed,” which combines Mussorgsky’s epic piano cycle “Pictures at an Exhibition” with film and animated images projected behind the pianist.

With his newest recording, Andsnes returns to convention with two of the great twentieth-century piano concertos of the virtuoso Russian school (Rachmaninov, Prokofiev, Shostakovich). In choosing this repertoire, Andsnes joins the ranks of great pianists who have made their mark on the Rachmaninov cycle. Vladimir Horowitz exuded pure romanticism in his approach, whereas Martha Argerich took the edgy, experimental route. Andsnes and company opted instead for moderation, yielding subtle though expressive results. The soloist’s impersonal, straightforward approach—bolstered by Antonio Pappano’s sumptuous London Symphony Orchestra—clears the view often fogged by virtuosic bombast, revealing nuances in Rachmaninov’s icy landscapes.

This interpretative clarity is best heard in the third concerto’s opening movement. Moving smoothly along with a moderate pulse, Andsnes’s delicate rendering of the concerto’s haunting theme is understated and elegant. In the ensuing arpeggiated runs, he maintains this poise, and an ever-present sense of restraint tempers a potentially overwhelming cascade of notes. Rachmaninov’s third concerto is infamous for the daunting technical difficulties it presentsand the composer’s own tendencies to bombast (look no further than his second symphony) threaten to alienate any innocent listener. Andsnes’s streamlined approach then serves to sidestep sensory overload. Ultimately though, the soloist does let loose, and to great effect. In an impeccable cadenza, Andsnes delays dramatic rubato until the section’s final moments, building unbearable tension in the process.

The fourth concerto’s Largomovement displays similar qualities. A relaxed atmosphere pervades this movement, where warm strings and plump pizzicati evoke a sort of pleasant ennui. Here, the soloist is not the star of the show, but merely a commentator on the orchestra’s activity. By placing himself in the background, Andsnes allows this action to unfold organically, riding the orchestral wave up to its pseudo-climax and back down again before the terrifying jolt that opens the finale.

Despite Andsnes’s smart interplay with the orchestra in the middle movement, their interpretation of Rachmaninoff’s fourth concerto is markedly less engaging than the third. Beyond a dreamlike middle section, the concerto’s concluding movement is constant stimulation, endless piano-orchestra banter that rings hollow. As such, the record comes to an unfortunate close.

The third concerto is surely the highlight of the entire affair, with its romantic Adagio and whirlwind Finale. In this final movement, Andsnes truly shines as a virtuoso as he navigates breakneck staccato passages with apparent ease and cool agility. And where Rachmaninov’s fourth concerto revels in thunderous crashes worthy of cartoonish onomatopoeia, the third concerto’s finale is exhilarating in its rhythmic propulsion. Here, orchestra and soloist triumph together on the verge between order and chaos as the Brazilian chôro pulse (in Rachmaninov, surprisingly) threatens to derail both.

The recording’s sound balance is also somewhat odd—it seems that the orchestra overpowers Andsnes in several tutti sections, with varying results. In one sense, this orchestral domination is frustrating in the climactic sections of the concertos’ first movements. We lose the soloist at the very moment he should rise to the occasion. On the other hand, this sound mix is somewhat enthralling. It feels like sitting amongst the orchestra itself, or on the soloist’s piano stool, being engulfed by giant waves of sound and engaged in a sonically intense experience.

If Andsnes’s recording is not seminal, it at least provides new looks at old favorites. His playing is smart—navigating an elegant balance between expression and virtuosity—and the sweeping narrative arc of his interpretations is worth the minor troubles along the way.