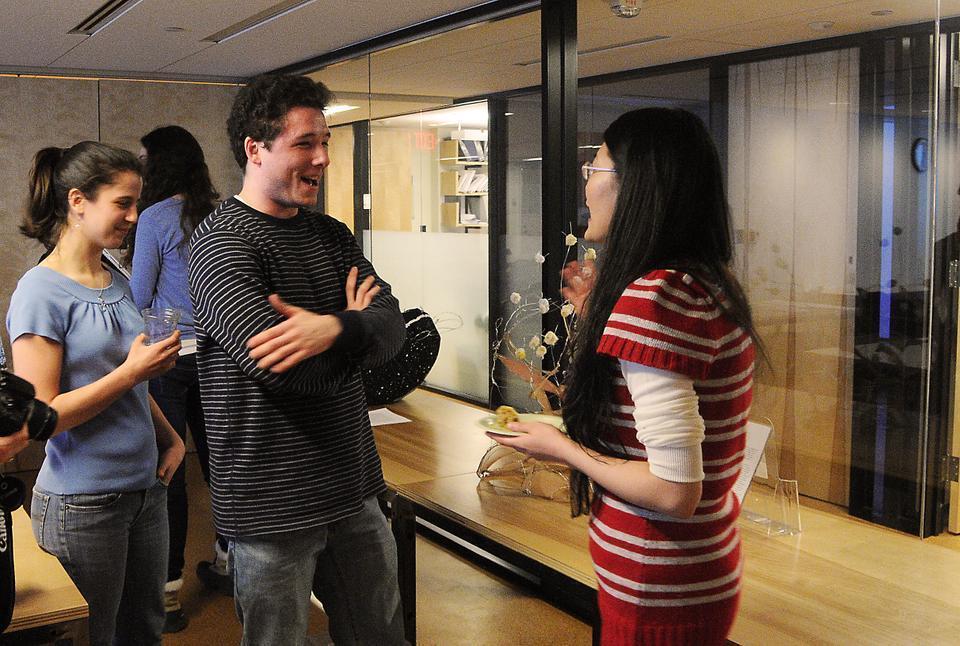 So sang Marina S. Magloire ’11 and Kelly N. Bodwin ’11 to the tune of Haddaway’s “What Is Love,” at the inaugural Science of the Physical Universe 20 project exhibition in the General Education office Friday afternoon.

The exhibit featured student projects that blended art and science, ranging from musicals about mitosis to 3-D models of the tree of life.

“We wanted a capstone project in addition to the final exam,” said organismic and evolutionary biology lecturer Andrew Berry, who is one of the course’s three instructors. “We thought students should have the opportunity to engage with the material in any way they wanted to.”

Physics professor Melissa Franklin—another SPU 20 professor, who had to miss the exhibit because she is in Geneva working on the Large Hadron Collider—first suggested giving students the option of creating an original project rather than writing a final paper.

“I was dubious, but lots of people took this idea and ran with it,” Berry said. “I’ve really been blown away by the quality and diversity of the stuff people have produced here.”

Two SPU 20 students, Veronica E. Manzo ’13 and Daniel R. Martin ’13, filmed a 16-minute movie involving a runaway princess set in the “Hardy-Weinberg Kingdom,” inspired by the Hardy-Weinberg principle which explains what causes allele and genotype frequencies to change over time in a population.

Anna J. Murphy ’12 chose to explore thermodynamic entropy—or degree of disorder—from the perspective of an alien in a short movie, and Katherine A. Mills ’11 investigated the same concept through a set of two paintings entitled “Colorful Dots.”

Poems, a model of the Big Bang, essays, and a film entitled “Pride and Prejudice and Electrons,” by Cora F. Frazier ’11 were also on display at the exhibition.

The third SPU 20 instructor Logan S. McCarty ’96 noted that the interdisciplinary course—which spans chemistry, physics, and biology—was possible as a result of the flexibility of the General Education curriculum.

“This event is General Education personified,” said General Education administrative director Stephanie H. Kenen, as she observed the project displays. “We want Gen Ed to be a place where students can extend their intellectual lives outside of the classroom.”

McCarty, who is also Assistant Dean of the College, said the three instructors plan to incorporate some of the projects into next year’s curriculum as teaching tools and hope to create an online gallery where the projects can be viewed.

“Having all these projects will inspire students and show them the breadth of what they can consider,” he said. “Over time we hope to develop an incredible repertoire.”