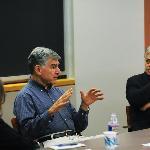 On the night of Nov. 5, 1940, seven-year-old Michael S. Dukakis—future governor of Massachusetts and the Democratic party’s 1988 presidential nominee—set up a card table in the living room of his family’s Brookline home, where he turned on the radio and carefully tracked the results of Franklin D. Roosevelt’s victory over Wendell L. Willkie.

As the former president of his third-grade class at Brookline’s Edith C. Baker Elementary School, Dukakis—an Eagle Scout—said that he had always been interested in politics.

“Every Greek kid knows that democracy began in Athens,” he said.

After graduating from Swarthmore in 1955, Dukakis served for two years in Korea.

When he returned to Boston in 1957, he said, he was ready to study law.

At the Law School, Dukakis’s classmates were struck by his sense of humor and his involvement with local politics.

Earl J. Silbert, a friend from the Law School, remembers playing tennis with Dukakis and meeting for lunch in Boston Common when they were both working for downtown law firms.

According to Silbert, in those years Dukakis was primarily interested in politics at the local and state level. In fact, Dukakis said, while he was a student at the Law School he commuted from Brookline, where he was heavily involved with urban renewal projects.

Law professor Philip B. Heymann, who also graduated from the Law School in 1960, recalls the remarkable speed with which Dukakis entered local politics after graduation.

“His manner was like it is now,” said Heymann. “He had a confidence and poise about him. It seemed extraordinary to [me as] a law student that someone would be in the legislature so soon.”

Dukakis was elected to the Massachusetts House of Representatives in 1962 and became governor of the Commonwealth 13 years later.

As governor of Massachusetts, Dukakis is perhaps most fondly remembered for his improvements to Boston’s mass transit system.

He was also the principle architect of “the Big Dig,” which attempted to alleviate the traffic that cut through Boston.

In the words of A. Paul Cellucci, a former Republican governor of Massachusetts, the Big Dig “beautified the city of Boston, eased traffic flow, and provided easy access to Logan airport for the people of Massachusetts.”

Not all, however, agreed with Dukakis’s fiscal policies.

According to Celucci, Dukakis raised the state income tax from 5 percent to 5.95 percent in a hike that he promised would only be temporary.

Dukakis said that he had never even considered running for president until he watched the events of the Iran Contra scandal unfold in November 1986.

“I couldn’t believe it,” he said. “The president and vice-president were lying to Congress, misleading the American people, and violating the law—it was appalling.”

And although Dukakis lost the election to George H.W. Bush by a large margin—he garnered 111 electoral votes to Bush’s 426—among the most memorable aspects of 1988 election was Dukakis’s reaction to the “Willie Horton” scandal.

The scandal refers to the 1986 weekend furlough release of Willie Horton, who was serving a life sentence for murder in a Massachusetts prison. Horton did not return to jail after his furlough and subsequently raped a woman twice, after assaulting her fiancé in April 1987.

According to Susan R. Estrich, Dukakis’s campaign manager in 1988, the Willie Horton scandal then became a “surrogate for the question of values” in the election, an instrument for determining whether one was “on the side of the criminal or the victim of the crime.”

Although Dukakis did not institute the Massachusetts furlough program during his tenure, he nevertheless defended it as a means of criminal rehabilitation.

The incident became an opportunity for the Bush campaign—which called him a “Massachusetts liberal” who was far too extreme for the White House—to attack Dukakis’s values.

Recalling the campaign, Dukakis said he regrets his failure to fight back.

“I don’t resent [Bush],” he said. “I’m angry at myself for not recognizing that when someone comes at you with an attack campaign, you’ve got to fight back. You’ve got to have a carefully thought-out strategy to deal with it, and we didn’t. I blame myself more than anyone else.”

Estrich, however, who has written about her own experience as a rape survivor, said she had known very well how powerful the Willie Horton issue would be.

“No one understood better the power of that incident than I did... It was an issue, and it was an issue we knew was coming.”

But Estrich, who is a 1977 graduate of the Law School, said that Dukakis “was not a great one for throwing the mud at the other guy. Even in the primaries he used to frustrate us because he didn’t want to go negative on the other side.”

For Estrich, it became clear that Dukakis had lost the election during the presidential debate moderated by CNN anchor Bernard Shaw. Shaw had opened the debate by asking Dukakis if he would favor an irrevocable death penalty for the killer were his own wife raped and murdered, and Dukakis responded that he would not.

According to Estrich, she, Bill Clinton, and Dukakis had rehearsed his answer to what she called “the passion question,” but Dukakis had failed to recognize the question about his wife for what it was—a chance to salvage his image from the Bush campaign’s accusations.

Estrich was the first person to see Dukakis after the debate. She recalled that he came up to her and said, “I blew it. I’m sorry.”

“Some of the things [Dukakis is] most criticized for are sticking to his principles, like death penalty,” Heymann said in an interview. “He stuck to his principles and is a totally honorable guy.”

But, in Estrich’s view, an “honorable guy” is not necessarily a winning politician: Dukakis’s refusal to retaliate against the Bush campaign was not his most advantageous decision.

“The sad commentary is that it reflects very positively on his integrity and his dignity,” she said,“but it just wasn’t a winning strategy.”