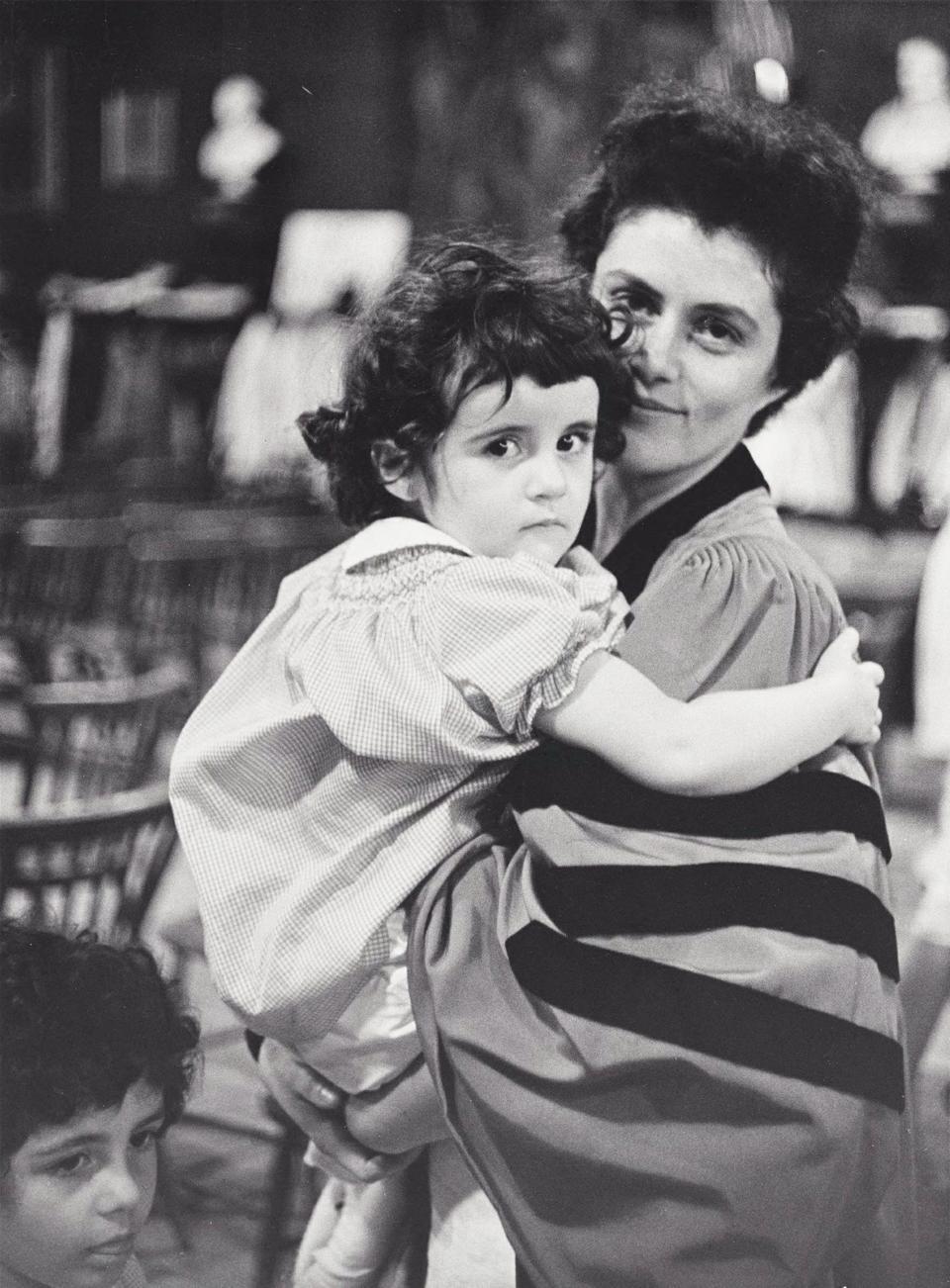 Alma Arbos, who received her Ph.D from Radcliffe in 1962, holds with her daughter during the Radcliffe Commencement ceremony. Radcliffe President Mary I. Bunting-Smith encouraged mothers to complete their degrees.
By Barbara B. Depena, Crimson Staff Writer

While growing up in Brooklyn, Mary I. Bunting-Smith’s mother would sometimes tell her, “Thee is a funny little girl.”

This statement would prove to be prophetic. Educated at home until the eighth grade, Bunting-Smith went on to pursue traditionally male-dominated disciplines, receiving an undergraduate degree in microbiology from Vassar College in 1931 and a Ph.D. in bacteriology from the University of Wisconsin at Madison in 1934.

“I grew up believing, gratefully, that the doors of educational opportunity in this country were wide open,” she said during an address to Southern Methodist University on Jan. 28, 1966.

Bunting-Smith continued her career as a microbiologist, teaching and conducting research at Bennington College, Goucher College, Yale University, and Wellesley College before serving as dean of Douglass College. In 1960, Bunting-Smith became the fifth president of Radcliffe College and the third woman to hold the position.

“She was very no-nonsense. She didn’t look like she spent all of her time putting on her make-up and doing her hair,” Mary H. Metz ’60 said. “Her very appearance and demeanor was serious. She was validating the idea of a woman who was serious.”

For Bunting-Smith, the dearth of women in intellectual, social, and political arenas was “a curious thing.” In a 1961 address to The University Women’s Forum in Philadelphia, she said educated women were underappreciated.

“Their high ability has been amply demonstrated in our schools and colleges, but this has seemed to carry little commitment on their part, or interest on anyone else’s in their later higher achievement,” she said. “Rather we all seem to be content to let them serve as intellectual pace setters, useful during training but not expected to run in any important races.”

During her first year in office at Radcliffe, Bunting-Smith began to overturn this prevailing attitude about women’s education, implementing policies that increasingly integrated Radcliffe with Harvard and encouraged female students to be leaders outside the home.

Although Radcliffe women had begun attending classes at Harvard after a 1943 agreement formally instated joint instruction, some female students prior to Bunting-Smith’s inauguration said that they felt they were not full members of the Harvard community.

“Women were marginal, seriously marginal,” Metz said. “We were not allowed to step inside Lamont Library because we were thought to distract the men from their studies. That meant that you had to go back to Radcliffe dorms after class, and then you had to go to the Radcliffe library if you wanted to study. You were really separated from the men.”

Metz added that this sentiment permeated her interactions with faculty members, as few made themselves available to assist the women enrolled in their classes.

“I remember one humanities professor that I had who was wonderful,” Jill Kneerim ’60 said. But when a male friend asked him about her, the professor responded, “Well, she’s sort of that junior-league type.”

At the time, Kneerim didn’t know what it meant, but she said that it “really shows that there just weren’t that many ways to think about a young woman who was outspoken.”

Although Metz said that her dedicated senior year tutor helped her with her thesis and eventually inspired her to become a sociologist, he was a rare exception among the teaching staff. “There were very few faculty members who didn’t treat their female students like afterthoughts,” she said.

While some women felt that they were considered a lower priority than their male counterparts, some Harvard students said they disagreed.

“I don’t think that most of the men thought that they were at two different colleges,” Paul A. Buttenwieser ’60 said. “While Radcliffe undergraduates couldn’t go to a lot of places that today would seem outrageous, there were places at Radcliffe that we didn’t particularly go to either.”

But Metz said that most people do not realize that the quality of a Radcliffe education was affected by the way the institution was structured.

“By the way that things were set up in Radcliffe, we were being trained to be good hostesses,” Metz added.

She said that during meals, about nine people would sit at a round table, and they were expected to make conversation with each other. When students came to clear the tables, everyone was expected to leave.

“It was wonderful training for making small-talk as a hostess, but it was lousy stimulation for intellectual conversations,” Metz said. “Men would sit at tables of two to four and talk for hours.”

Bunting-Smith had a very different idea about women’s education. As she stated in a 1966 address to Southern Methodist University, higher education should “provide freedom and backing for those of identified ability and high motivation to move as their talent takes them.” Universities, she said, “must seek to develop the potentialities of people in all segments of society,” an idea that is implicit in the concept of democracy.

Bunting-Smith spoke openly about the unfortunate disparities in the way that society viewed education for men and women—a mindset that she hoped to change.

In the same address to SMU, she said that “there was a real difference in the way most adults talked to little girls and little boys about their futures and in the expectations of their teachers in school and college.”

This widespread attitude, Bunting-Smith argued, was one that had to go.

“Universities in this country have found it convenient to prejudge women’s potential contribution for leadership,” she said. “What I ask is that they experiment.”

When Bunting-Smith arrived at Radcliffe in early 1960, her actions and perspective departed from those of the previous president, Wilbur K. Jordan.

“Mary Bunting came in during our last semester. We hardly got the opportunity to see her, but it was such a morale-booster to have her show up,” Metz said. “Her predecessor was just kind of sleep-walking through the role. She came in full of energy and affirmation and really cheered us on.”

Bunting-Smith adopted a role that was unusual for a Radcliffe administrator. At her president’s residence on Brattle Street, she often left her porch illuminated in the evenings to let Harvard and Radcliffe affiliates know that they were welcome to come in to speak with her—a tradition that she carried over from her time at Douglass College. She also showed her appreciation for the Radcliffe maids by inviting them to a formal tea in her home.

“She was very supportive and welcoming to the women on campus,” Susan T. Friberg ’64 said. “I had a decision to make as to whether or not to accept advanced standing. My mother contacted her and asked her to help me with the situation. President Bunting then invited me to her home to speak to me personally. I thought that that was a very good thing.”

Bunting-Smith also implemented a number of institutional changes that she believed would improve the quality of education for her female students—even if, as some people feared, these new measures would cause the distinction between Harvard and Radcliffe to break down.

“I don’t come to Radcliffe with a preconceived notion that the right way to do things is with Harvard or without Harvard,” Bunting-Smith told The Crimson in 1960. “But I do feel Radcliffe is obligated to offer the very best educational opportunities and if this can be done through Harvard, then that is the way it should be done.”

Among the changes advocated by Bunting-Smith was the affiliation of Harvard Houses with Radcliffe dorms, the first of which were between Quincy House and Holmes and Comstock Halls. These affiliations were aimed at raising the level of what Bunting-Smith called “dinner-table education” at Radcliffe. They also granted women accessibility to scholarly conversations with professors and research assistants that had previously only been granted to male students.

Men in many Harvard Houses, Kneerim said, had the opportunity to dine with junior and senior faculty members. But Radcliffe women had “keepers” who watched over them in the legal role of parents.

Kneerim said that she and her classmates were “all keenly aware” of these inequalities. “Surely we were all deeply affected by the fact that there were no women in leadership,” she said. “You can imagine how extraordinary and marvelous it was when suddenly Radcliffe had a woman president [again]. It was an exciting revolution.”

Bunting-Smith’s most enduring legacy remains the Radcliffe Institute for Independent Study, which allowed women to return to their studies even after they married and started families. Bunting-Smith believed that women could maintain their traditional roles as mothers while assuming a place in the workforce.

In her 1961 address to the University Women’s Forum, Bunting-Smith said that a woman’s expected role as a wife and mother should not prevent her from joining the workforce—rather, educational institutions should be expected to cater to her unique needs.

“The Radcliffe Institute was certainly a big step in helping women scholars whose careers had been interrupted to do scholarly work with the support of the Institute,” Metz said. “I know that that was one of her first projects, and it was seen as a big step forward for women during that period.”

Although Bunting-Smith’s tenure predated the emergence of the women’s rights movements of the late 1960s and ’70s, many Radcliffe alumni became actively involved after they graduated.

“We were breaking the ice out there for daughters who came along and the granddaughters who are entering universities now,” Kneerim said. “I have seen so many phenomenal changes for women. We were decorations in the past.”

Metz says female students should now to turn to Bunting-Smith as an example of the life that they should attempt to lead.

“Celebrate the accessibility of the university now. You need to realize that you’re standing on the shoulders of people like Mary I. Bunting who worked very hard and made many sacrifices,” she said. “Women do have a somewhat different life trajectory because of their gender. Different cultural patterns exist and that is fine. There doesn’t have to exist a contradiction between being an excellent professional in a given field and being feminine. Women now should honor both.”

—Staff writer Barbara B. DePena can be reached at barbara.b.depena@college.harvard.edu.