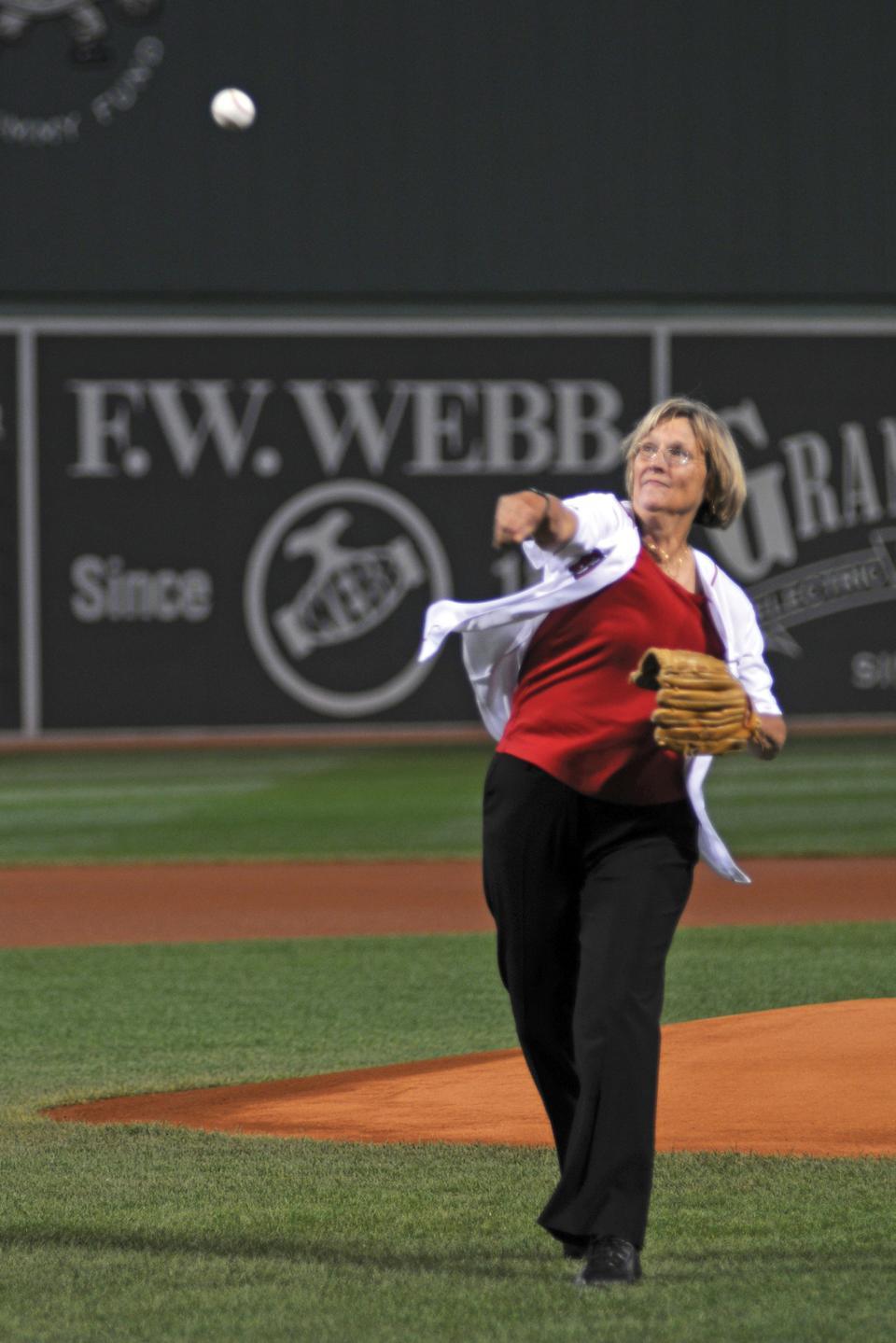 High and outside—that is where University President Drew G. Faust put the ball when she threw out the opening pitch at Fenway Park last night.

Dressed in a Red Sox jersey with the number 28—in reference to her being the twenty-eighth University president—Faust threw an arching pitch that crossed the plate in admirable fashion.

So how did it feel to throw out the first pitch?

The Kuumba Singers of Harvard College delivered a stirring rendition of the national anthem that drew a round of enthusiastic applause.

“It’s not every day you sing at Fenway,” Lawrence N. P. Benjamin ’11 said. “When you walk out you’re just trying to remember your first note, so you don’t sing a bum note from the start, but once you start it’s all downhill from there.”

Harvard students filled the upper sections of Fenway’s first base grandstand, sitting in seats donated by an alumnus.

More than 800 students entered the Harvard Alumni Association’s lottery for tickets, with about 200 students winning two tickets each.

For Jessica N. Buck ’12, who spent several years living in Indonesia, yesterday’s outing to Fenway was her first time to a baseball game. While she said Fenway lived up to its mythic reputation, the game experience was not quite what she had expected.

“It’s kind of slow,” Buck said. “I think I need a little more entertainment than this.”

But just as she said this, Red Sox designated hitter David Ortiz smacked a three-run home run to right field, which at least temporarily upped the excitement level.

Regardless of the game’s pace, last night brought Harvard students to one of Boston’s most iconic and historic landmarks—a point Boston residents never cease to emphasize to baseball fans with other loyalties. Kristen E. Simmons ’14, an Astros fan from Houston who used to watch her team play at Minute Maid Park, could only agree.

“It’s got a lot more history,” she said. “Minute Maid used to be called Enron Field, and, well, then that had to change.”

But history is not always a good thing. Anne Carroll Ingersoll ’12, a six-foot-two volleyball player, said she felt a little cramped in the peeling wooden seats.

For Faust, last night’s pitch had been long in the making—she began practicing last spring.

Harvard’s general counsel Robert W. Iuliano ’83 lent Faust a glove to use for the occasion.

Faust said that she would return the glove to Iuliano but with a bit of history imbued. Not only would the glove have been used by a University president to throw out the first pitch at Fenway, Faust also rubbed the glove in its dark, red ocher dirt.