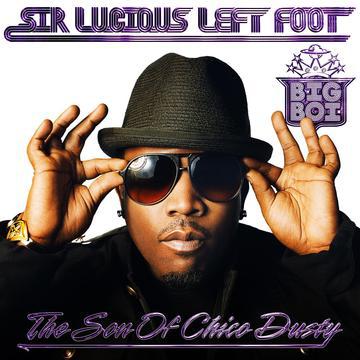 For a genre rooted in part in improvisational skills, mainstream rap is frequently guilty of a dearth of originality. Admittedly, this is a rather ephemeral quality, but it’s difficult to dispute that the same essential R&B instrumentals and gangland lyrical themes are too-often recycled by hip hop and rap’s leading lights.

Nobody expected the supposedly lesser half of hip-hop duo Outkast to lead the fight against monotony in major-label hip-hop, but with “Sir Luscious Left Foot: The Son of Chico Dusty,” that’s exactly what Big Boi accomplishes. In both lyrical style and orchestration, Big Boi’s new album is an adrenaline shot into the heart of mainstream rap and hip hop. The rapper’s smooth and inimitable flow, over a wide and mercurial assortment of electro, funk and classical backdrops, is unmatched. And “Sir Luscious Left Foot,” is the genre’s most inventive effort since Madvillain’s “Madvillainy” in 2004, and most joyously eccentric since De La Soul’s “3 Feet High and Rising” more than 20 years ago.

The most impressive demonstration of Big Boi’s rhyming prowess is “Tangerine” a sparsely-produced tune in which ominous, sinusoidal bass and a crisp drumline take the backseat to the rapper’s vocal stylings. He spews lines like “Okay, midnight, fit like, four or five chicks / in the drop ‘66 bumpin ‘Southernplayalistic’ / as we ridin’ through the city lights, Monday Magic City night” at will, effortlessly shifting the cadence to accommodate his tongue-twisting rhyme schemes.

The album’s standouts vary in theme, instrumental support and mood, and at times the whole unit feels held together only by the single thread of Big Boi’s mesmerizing flow. Weaving rhymes within rhymes and switching tempos on a dime, he sounds more confident than ever on “Sir Luscious Left Foot,” and his lyricism turns out to be a far less tenuous unifier than might be expected.

“Shutterbugg,” the first single off “Sir Luscious Left Foot,” is perhaps not the best tune on the album, but does feature some of Big Boi’s silkiest rhymes. It also benefits from a spellbinding wordless vocal hook and a funky guitar-driven bridge. Still, the mostly straightforward track pales in comparison to some of its more adventurous neighbors.

One of those is “Shine Blockas,” a confection of synthesizer swells, delicate keyboards and carefully-constructed vocal layerings. Gucci Mane’s muddled, mediocre verse only reinforces how precise and listenable Big Boi’s rhymes are: “Can’t be tripping bout no paper cause the safe is not so safe / The piggy bank got legs and feet, and can’t get up and walk away,” he raps with his distinctive Georgian lilt. This is the peak of “Sir Luscious Left Foot,” and the album experiences its only extended dip in quality in its remaining tracks.

But for all the standout tunes on “Sir Luscious Left Foot” perhaps its most remarkable quality is its consistency. Barring the irritating staccato chatter of “You Ain’t No DJ,” which breaks up an otherwise brilliant stretch in the album’s middle third, the album defies another rap cliché by containing near-zero duds, achieving the rare combination of innovation and evenness.

It’s a testament to Big Boi’s creativity and attention to detail that even the skits that end several of the songs – which on most rap albums constitute throwaway talk sessions or self-aggrandizing rants – are clever and genuinely funny. “Sir Luscious Left Foot” is a labor of love, and the work pays off in rhymes as reference-packed as a David Foster Wallace story and in the astonishing cohesiveness of an album that samples British R&B group Soul II Soul and a Tozzi opera in two consecutive tracks. The long-gestating, oft-delayed “Sir Luscious Left Foot” displays the fruits of those extended efforts clearly, and seems destined as a result for an esteemed place in hip-hop history.