Elsinore Start Over and Gets It Right 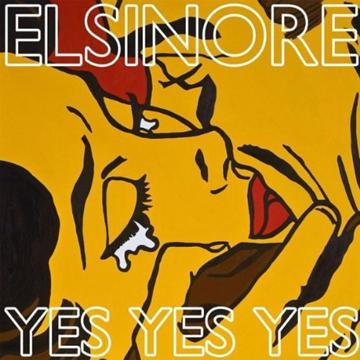 Although “Yes Yes Yes” is Elsinore’s second album, they have offered such a major shift in style that this might as well be their debut. After five years out of the spotlight, their work deserves much recognition, and the band deserves a break-out run.

Elsinore’s first album, “Nothing For Design,” was comprised of soft, acoustic tunes and folk-country tones that added up to a decent, yet uneventful LP. That all changed though—dramatically—when work began on “Yes Yes Yes.” Whether band members were hit in the head with a rock and forgot what their last album sounded like, or they decided to start over and create a more mainstream, marketable sound, something clicked and it worked. Their new sound is extremely fresh and “Yes Yes Yes” deserves credit for combining strong musicality with a pop rock sound worthy of being put on repeat.

Even the album artwork of “Yes Yes Yes” says a lot about what’s in store. The cover is comprised of a colorful redo of a well-known Lichtenstein pop art piece, giving a vintage feel that is identifiable throughout the ten-track album. While, as stated above, Elsinore offers an indie pop sound that is very apropos to mainstream, popular artists, there is an old-school flair throughout the album that creates a more classic rock persona. An album that is best played straight through, “Yes Yes Yes” is worthy of a vinyl recording. Set it and let it play. Although it doesn’t have the entirely psychedelic feel of the 1970s epics, it comes pretty damn close.

A defining element of the album is its unpredictable, yet incredibly applealing tempo and style shifts throughout each song that add a unique flavor, forcing “Yes Yes Yes” into a genre of its own. “Gasoline,” one of the highlights of the album, begins with quiet vocals and a twinkling, digital background track, before it gains speed and jumps into verse and chorus, supported by acoustic guitars and an accented drum beat. The track is dominated by bassist Chris Eitel, whose bass line leads the way into a slow bridge that explodes into an epic guitar solo. We’re then brought back quickly to an amped up chorus, with loud and prominent lyrics that highlight the strength of Ryan Groff’s vocals.

Similarly, tracks such as “The General” and “Chemicals” offer fast-paced, catchy chorus-lines and guitar riffs which then unexpectedly shift into slow, jazzy portions, with ride cymbals and syncopated beats. Together, the back-and-forth between tempos adds a very dynamic and refreshing feel to tracks which otherwise might fall ill to the repetitive style that Elsinore’s last album suffered from.

Elsinore’s lyrics, or their absence, adds another interesting element to their music. Overall, “Yes Yes Yes” allots a relatively small amount of time to actual lyrical verses, with some songs such as “Body of Water” that are entirely instrumental. The album is dominated by experimentation with instrumentals, using lyrics only when they benefit the tone or musicality. And when they are used, they often make little sense, such as the ending of “Wooden Houses” which reads, “this is how hunger strikes begin.” As Groff sings in the song “Lines,” “words won’t be the weapon that I use on you.” That certainly is true.

“Yes Yes Yes” marks Elsinore as a band from whom we will be hearing a lot more in the future. By advancing their sound from their previous releases, the group sets this album apart not just from their past releases, but from the scenery of most other similar artists working today.