Reiser and Rogen Find the Funny in Fighting Cancer 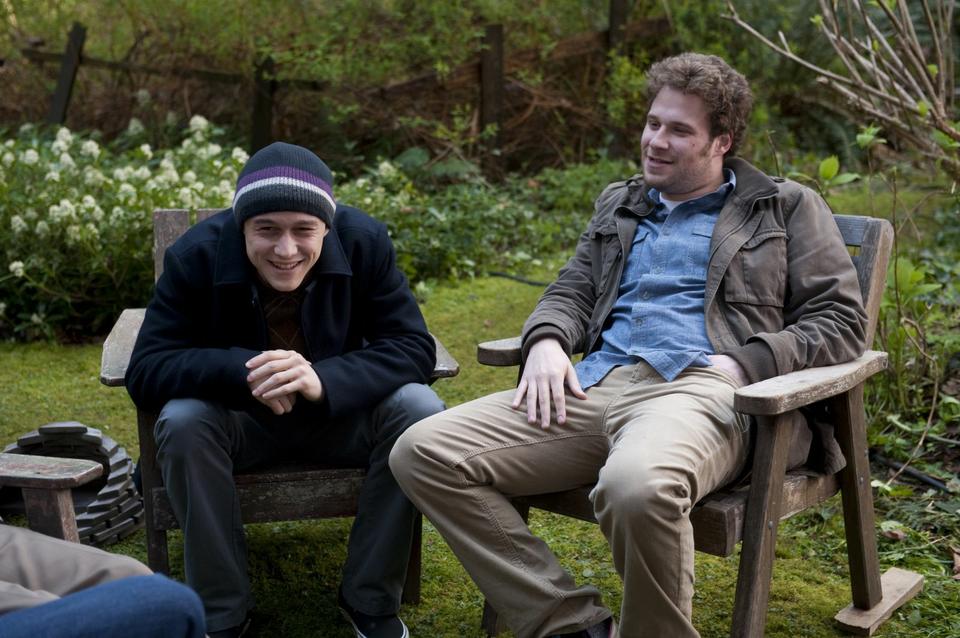 Joseph Gordon-Levitt and Seth Rogen star in “50/50,” a comedy about coping with cancer, written by Will Reiser.
By Alex C. Nunnelly, Crimson Staff Writer

If life gives you lemons, screenwriter Will Reiser has some advice for you: keep those lemons fermenting for seven years, make lemonade, and then hire Seth Rogen to sell it. Of course, for Reiser, these lemons came in the form of advanced spinal cancer. But with that premise, his sweet and sour movie “50/50” provides a platform for Rogen’s natural, stoner style of comic relief.

Together, years after their shared cigarette breaks at “Da Ali G Show” and joint cancer treatment in Vancouver—with Reiser as the patient and Rogen as the supportive friend—the two have collaborated again to create an authentic, light-hearted attempt at laughing despite cancer. “We’re not making fun of cancer,” Reiser says, “we’re making fun of the way that people deal with it, and the dysfunction it creates.” Toeing a thin line between comedy and melodrama, “50/50” combines poignancy and personal experience to demonstrate how these comedians confronted mortality—and conquered it with surgery, weed, and some therapeutic laughs.

While the film is not entirely based on real-life events, “50/50” is filled with on-point character development and sensory elements that only first-hand experience begets. “The movie is fiction,” Reiser explains, “but there’s still those emotions [that are] very true to how I felt.”

According to Rogen, these feelings were mutual. “If we hadn’t personally experienced this,” he says, “it would have been really hard to make this movie.”

In “50/50,” Reiser and Rogen portray an uncharacteristic treatment of cancer on the screen, and elicit laughs where one would normally find only tears. “It seemed like in every movie about [cancer], all the people do is sit around and dwell on it all day,” Rogen explains. “We thought it’d be interesting just to show a movie that felt like what we went through. It was really sad sometimes, but it was also really funny sometimes.”

“I was confronting my own mortality,” Reiser adds. “But we’re comedy writers. When we were 25, we would rarely sit around and talk about our feelings. We would just joke about it.”

And joke about it they have. Reiser imbues the script with hyper-personal details and reflections, while Rogen takes center stage on screen and seamlessly creates—or recreates—the character of himself, in the same best friend role that he “played” seven years ago.

“I just tried to be as natural and as real as possible,” Rogen says. “Honestly, sometimes your concern is more to create a character, and to sell a persona that isn’t yours. And that wasn’t really my goal with this.”

By juxtaposing their perspectives from their personal experiences with cancer, Reiser and Rogen generate a stereo perspective of sorts, conjuring two hours of entertainment that are far from two-dimensional. “[We] had a lot of creative input in [making] the film,” Reiser says, “It became a much more collaborative effort.” This creative control allowed both writer and actor to inject realistic, unforced transitions of emotion into the film that sprung from their own stories.

“There are some sequences [that], literally at the drop of a hat, go from being really funny to really dark,” Rogen says. “I was surprised at how quickly we could make those transitions back and forth.”

“I based it on what my own emotional trajectory was, and just what felt honest to the character in the movie,” Reiser adds. “It naturally came that way.”

Being able to write such an honest movie about his struggle has been a healing experience for Reiser. “Back then, I had to deal with a lot of dysfunction in my life,” he says. “Part of it was due to my inability to talk about it ... We never sat around and talked about what my feelings were or how painful it was at times. I think being able to write about it and process it all ... really enabled me to get it out of my system.”

From this perspective, Reiser’s “50/50” is a final catharsis of sorts, a supplement to his already long process of recovery. “There’s this tendency, when you go through a situation like that, you just want to run away, you want to avoid thinking about it,” he says. “After my surgery and rehab, I just wanted to get back to my normal life. Actually having to sit down and write this movie, I found there was just so much that I wanted to get out, and I wanted to say.”

“There are millions of people who get sick who don’t become miserable assholes,” Rogen adds. “And that’s what we wanted to portray.”

With “50/50,” Reiser and Rogen effectively channel these personal sentiments and emotions into what may be regarded as the new, sixth stage of grief: producing a cathartic feature film of pure authenticity, with personal stakes and no gimmicks—an all-natural approach to cancer’s funny, more human side.