After a disappointing end to the fall season, Harvard looks forward to the spring. 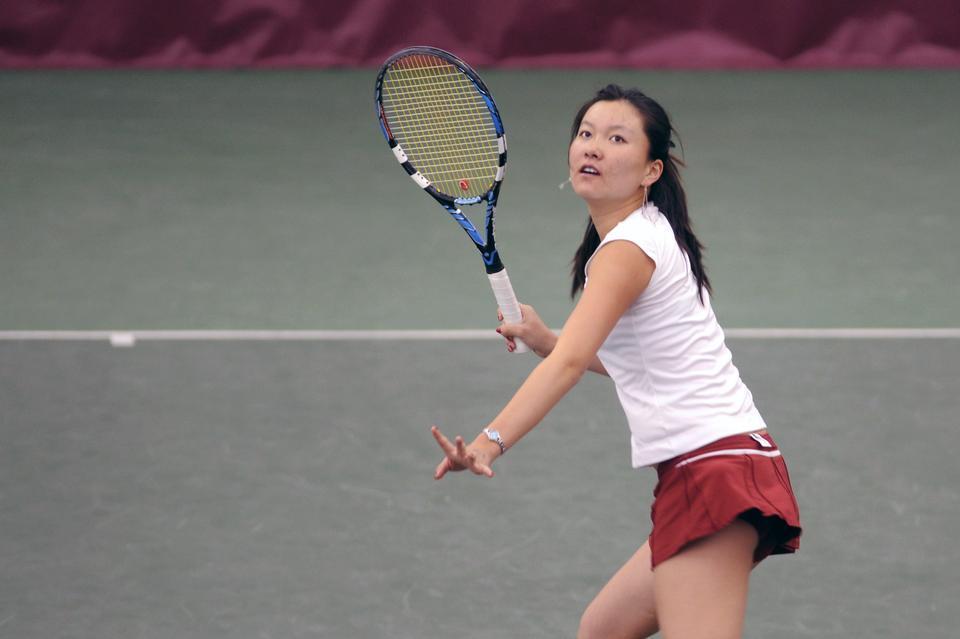 Juniors Hideko Tachibana, shown above in earlier action, and Kristin Norton were the top-seeded doubles pair entering the ITA Northeast Regional Tournament, but were defeated by Ivy rival Yale in the fourth round, extinguishing hopes of a first-place finish to close the fall season.
By Marina E. Watson, Contributing Writer

Despite a strong showing at the Intercollegiate Tennis Association (ITA) Northeast Regional Championship, the Crimson eventually came up short on both the singles and doubles sides. After losses to fellow Ivy League competitors in the Oct. 21-25 tournament in New Haven, Harvard forfeited its chance to advance to the ITA National Tournament.

The Crimson entered a total of six single players and three pairs of doubles teams in the tournament.

Of those that competed, all six singles competitors advanced to at least the second round in the main draw, and two of the doubles teams made it to the quarterfinals of the main draw before falling to a pair of Yale squads.

Gridley’s and Li’s victories in the qualifying round allowed them to advance to the main draw.

In the first round of the main draw, Gridley and Li sustained their winning ways.

The senior downed Jennifer Holtzberg of Rutgers, while the freshman took Stony Brook’s Polina Movcahn in two of three sets.

“She didn’t miss a lot, so we had a lot of grueling, grinding points,” Gridley said of Ion. “It was like 30-ball rallies; we were the last people on the court.”

Meanwhile, Crimson juniors Camille Jania and co-captain Kristin Norton were able to advance to the round of sixteen only to have their title hopes dashed before reaching the quarterfinals.

Jania bested both Jessica Linero of Boston University and Penn’s 10th-seeded Augustina Sol Eskenazi before her winning streak came to an end.

Jania’s loss to 7th-seeded Vicky Brook of Yale in a 6-4, 3-6, 6-3 decision marked an end to the tournament and her fall season.

Harvard entered the main draw of doubles with three teams, all of which advanced after first round victories, crushing their respective opponents.

Junior co-captains Norton and Hideko Tachibana—the top-seeded duo in the tournament—trumped Jamila Paul and Erin Colton of Army, 8-4, while Jania and junior classmate Alexandra Lehman went unanswered in an 8-0 victory over Abby Liu and Katina Zampas of Hartford.

Freshman Kelly Whelan and sophomore Hannah Morrill tallied a third win for the Crimson with an 8-1 match against sisters Della Taylor and Elle Taylor of Army.

Norton and Tachibana breezed through the second round in an 8-3 win against Dartmouth’s Janet Liu and Rachel Decker-Sadowiski.

“[Norton and Tachibana] have been playing doubles together for a long time and there is a lot of chemistry,” Li said. “They really know what they are doing on the court.”

Likewise, Whelen and Morrill also continued on to the round-of-sixteen after a decisive win over Lauren Frazier and Gabby Sullivan of Cornell, 8-1.

But the round-of-sixteen put an end to both doubles teams’ winning streak. The No. 6-seed Vicky Brook and Hanna Yu of Yale ousted Norton and Tachibana in a 9-8 upset.

The Bulldogs also forced Whelen and Morrill out of the tournament, with Yale’s Annie Sullivan and Amber Li defeating the duo in an 8-6 decision.

“Even though we didn’t have anybody extending to the finals of the tournament, we made a strong showing as a team holistically—in singles and in doubles,” Gridley said. “I think that it is really good to ... show other teams that we are going to fight really hard in all of our matches because they will remember that and be a little bit nervous the next time they play us."