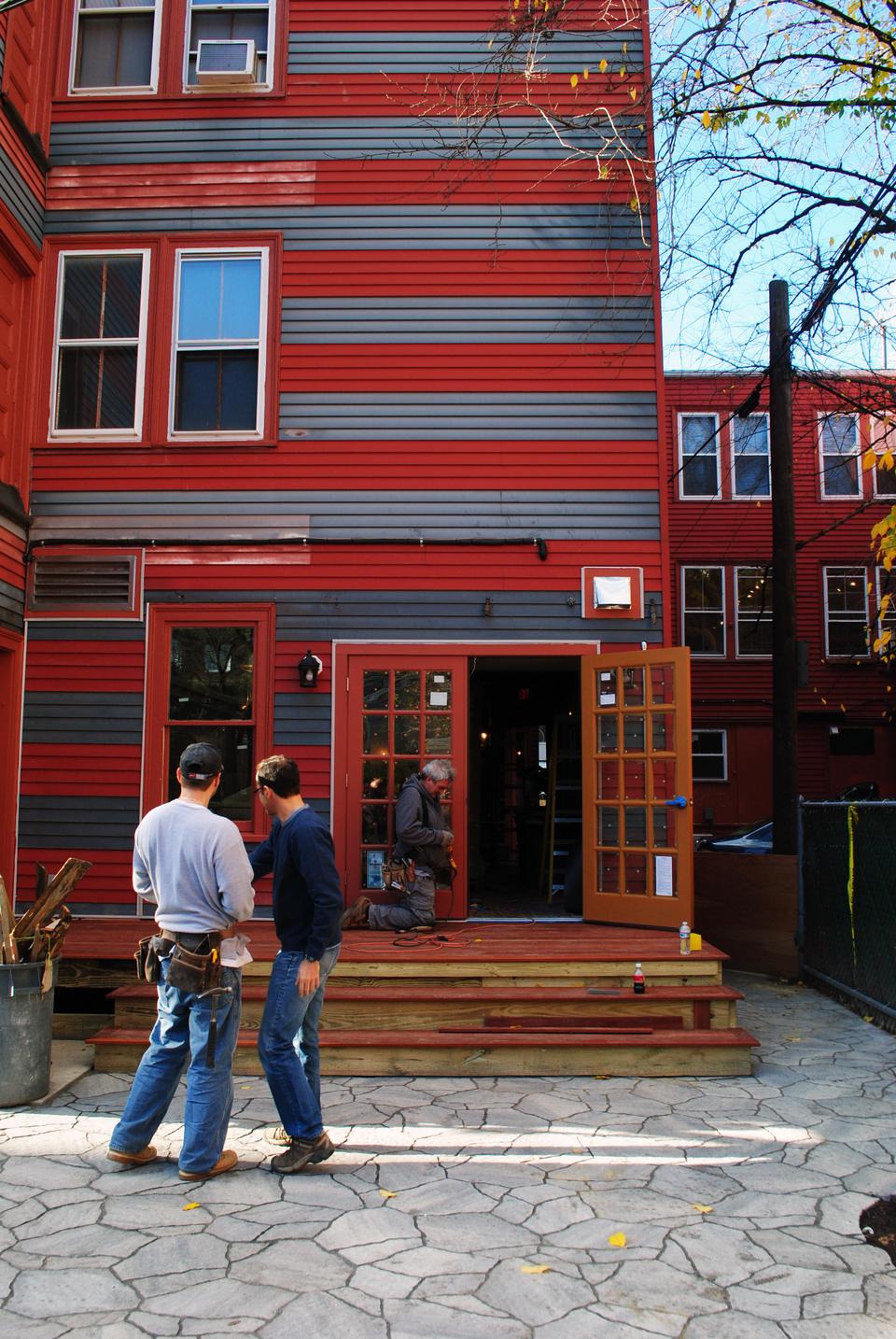 Andres Branger, center, owner of the soon-to be-open restaurant Orinoco, talks with construction crew workers while they work on the restaurant's back patio. Branger will be serving up "Pan American street food with a little fine tuning."
By Kerry M. Flynn, Crimson Staff Writer

Orinoco, a Venezuelan eatery with locations in Brookline and Boston’s South End, will be coming to Harvard Square early next year, replacing Small Plates, a Spanish restaurant, at 56 JFK St.

The menu contains a mix of traditional culinary items from Latin America, including the Andean and Caribbean regions. Options include a selection of Venezuelan sandwiches that can contain meat or vegetables.

A popular item, according to owner Andres Branger, is the arepa—a grilled corn pocket sandwich that is stuffed with shredded beef, pork, and exotic cheeses imported from Venezuela. The price ranges from $4.50 to $6.

Branger, who is from Venezuela, ensures that prices are low by purchasing his own ingredients, many of which are imported from his home country. All menu options are priced at less than $19.

The 1000-square-foot location in Harvard Square seats 50. Branger also negotiated with the landlord of the space to use the private garden in the back that will seat 20. Branger said he envisions the space being used for private events. The space is currently under construction and will include French doors, a surrounding fence, and fieldstones to provide an intimate setting.

“In each of our spaces, we really borrow from the infrastructure there. This area will allow guests to be set back from the busy energy of the street,” Branger said.

The other locations are also small in square-footage to offer an intimate, cozy feel that calls to the restaurant’s concept of traditional cuisine.

“We want to feel like you’re eating in somebody’s home,” Branger said.

Similar to the other restaurants, the location will have an assortment of different kinds of chairs, plates, and Venezuelan décor.

The Harvard Square location was previously the home to another Spanish restaurant, Iruña, which Branger often visited as a student at Boston University from 1979 to 1984.

“It was the only Spanish/Latin American restaurant in the area that existed when I was in college,” Branger said.

Branger had been looking at locations in Harvard Square for a year and said when the space opened up, he saw it as an omen. Branger secured the space last June and has been since working to upgrade the basic infrastructure of the space.

Branger opened the first location in the South End six years ago. After college, he worked at various financial institutions, with his last job at a start-up dot-com company.

“I decided I was going to live my dream and open a Latin American restaurant,” Branger said.

Branger devoted himself to the project and sold his house, sleeping on a friend’s couch until he opened the first restaurant.

The restaurant owner said he is excited to open another location in Harvard Square and plans to become a part of the community by supporting local non-profit organizations.

“We’re a neighborhood eatery, and we want to become a part of the community,” Branger said.