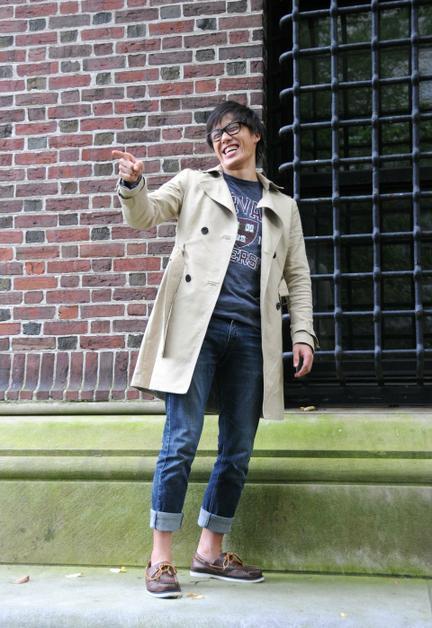 In this file photo taken for a Crimson magazine issue earlier in the semester, Abe Liu poses near Widener Library, showing off his taste of fashion. Liu was apprehended by police on Thursday.
By Amy Friedman and Justin C. Worland, Crimson Staff Writers

Abe Liu, a 27-year-old student at Harvard Extension School, was escorted out of Weld Hall on Thursday by Harvard University Police Department officers after sleeping in friends’ rooms in the freshman dormitory and telling students that he was a freshman at the College.

Over a period of two months, Liu told Harvard students that he lived in Weld, a dorm in Harvard Yard. He sometimes spent the night there when invited by freshman acquaintances.

Liu also created a presence at Harvard online, posting frequently to the Harvard University Class of 2015 Facebook group and becoming friends on the social networking website with Harvard students he had never met in person. Pictures of Liu taken in freshman dorms and posted on Facebook added to his credibility, acquaintances said. Since Thursday, Liu’s account has become unsearchable and his posts to the Harvard freshman group are gone.

Though suspicions about Liu’s identity arose among freshmen primarily due to his lack of swipe access to Harvard buildings, it remains unclear who alerted HUPD.

“Although the man was invited into [the] building, he was not a College affiliate and College officials determined that he was no longer welcome,” HUPD spokesperson Steven G. Catalano wrote in an emailed statement.

Students said to have hosted Liu in their room and the proctor in the entryway that Liu frequented declined to comment for this story.

In the days following Liu’s removal from Weld, rumors and questions about his identity and intentions have circulated among students at the College, sparking debate and speculation over various email lists, on Facebook, through student-generated internet memes, and in an article published online by The Harvard Independent, a weekly student newspaper.

Liu said that his removal from Weld and the subsequent rumors resulted from lies he told in an attempt to gain friends that spiraled out of control.

Liu’s account of his path to Harvard is this: He spent some time in college in North Carolina. Then he dropped out of school to compete in triathlons, an activity he had enjoyed from an early age. When that dream did not pan out, he decided to enroll at the Harvard Extension School in the hope of eventually becoming a doctor.

Liu said that during the summer before matriculating at Harvard, he came across the Class of 2015 Facebook group. Out of curiousity, he joined. Once he was in the group, he began to interact with members of the freshman class. He said that he took to “trolling” the group as a hobby.

“I just played off like I was a student. It got addicting,” Liu said. “It got fun.”

Liu said he spent less time on Facebook when the fall arrived and he filled his time with a job and academic work. But after quitting his job in late September to focus on his medical studies, he found himself with spare time and decided to return to the Facebook group.

Liu said he was curious about the people he had met online and wanted to put a face to their “internet identities.” According to Liu, he told his first lies when he met those students in person.

“The first lie is like, ‘Oh, I’m a student at the College,’” he said. “They always want to know more, so you start telling a lot of little white lies. And then you find yourself integrated into that society.”

Liu said that when a freshman acquaintance asked him to spend time in Weld, he was reluctant, but he eventually decided to go ahead. Sometime during October, he began telling freshmen he lived there.

He said that though he was untruthful, he never had any malicious intent.

“At the end of the day, all I wanted to do was to be friends,” he said. “The people that met me, the people that knew me, know that I never asked them for anything. I never coerced them into anything.”

Liu said that many accusations leveled against him in students’ online chatter are unfounded. He specifically insisted that assertions in The Harvard Independent’s story are unfounded, including allegations that he stole a freshman’s Harvard ID and that he participated in The Crimson’s Grand Elections ceremony.

Liu said he did not take someone else’s ID but that he did forge an ID, one that he described as “not really even passable.” For over a month, since the Occupy Harvard encampment began, security personnel have been posted at the gates of the Yard to check every entrant for a Harvard ID.

According to Anastasiya Borys ’15, who lives in the entryway that Liu spent time in, students noticed early on that Liu was not in the Freshman Register and assumed that he was an Extension School student.

“He used to hang out in Weld a lot,” said entryway resident Selina Y. Wang ’15. “We assumed that he was in the Extension School. I guess we didn’t think much about it, but then we started getting suspicious about it when he started to have people swipe him in everywhere.”

When Liu was apprehended by police on Thursday, these students who had come to know him as a familiar face or even a problem set buddy said they were shaken.

“People were just kind of shocked. We had joked before that he didn’t even go here,” Borys said.

Reina A.E. Gattuso ’15, a Crimson magazine writer who lives in the entryway, said, “I personally found it a bit unsettling, and I think some of my peers did. There was definitely a lot of curiosity and a sense of ‘Why is this guy doing this?’”

Liu said that he sympathizes with the students’ concern and did not intend to cause disruption to the entryway.

“I understand the position. They’re scared. It doesn’t make any sense. They feel betrayed,” he said. “I made a mistake. My mistake was being lonely.”

—Staff writer Amy Q. Friedman can be reached at afriedman@college.harvard.edu.