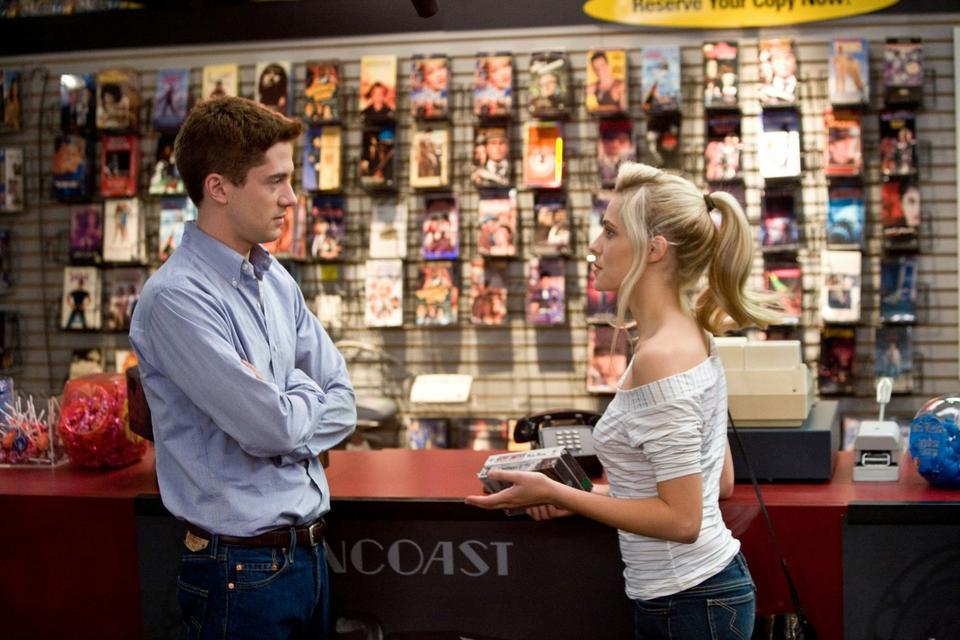 When talking to Topher Grace and Teresa Palmer in a dimmed lounge at Kings Bowling in Boston, MA, it’s easy to think that they’re the cool friends of your older siblings instead of two of Hollywood’s more memorable up-and-coming actors. The pair couldn’t seem more down-to-earth: Palmer walked in and immediately headed for the bowling lanes, and Grace shouted “TOGA!” at the circle of college students excited to interview him. But don’t let their lack of pretension fool you—the two young stars’ new film, “Take Me Home Tonight,” looks to be a career stepping-stone for both.

In the movie, Grace and Palmer play, respectively, Matt Franklin and Tori Frederking—a too-smart-for-his-own-good graduate of the Massachusetts Institute of Technology and the girl he was in love with throughout high school. But this isn’t any ordinary contemporary romantic comedy; rather, “Take Me Home Tonight” doubles as a coming-of-age film set in 1988 Los Angeles.

Both stars are adamant that the film is not a spoof of the decade, but rather presents an honest portrayal of it. “We wanted [“Take Me Home Tonight”] to feel like it was a movie that was really made in the ’80s,” Palmer said. “Like we had put it away in a vault and pulled it out and brushed the dust off and we just pressed play. It feels vintage, and I think we managed to capture that.”

The actors related how the film’s crew went to extreme lengths to recreate such an iconic era—from partying to “Come on Eileen” in their free time to studying old yearbooks so as to capture the details of 1980s fashion. That said, however extravagant the movie’s period outfits were, costume designer Carol Oditz kept Teresa Palmer’s look beautifully timeless.

The Australian-born bombshell may not be a household name quite yet, but Palmer is working her way up the ladder. “It feels very surreal,” she said with a smile. “I really am trying to embrace the whole experience because there are so many peaks and valleys in this career, and right now it’s a peak but I know that there’s a valley that’s going to be coming shortly.”

Though downturns are inevitable in Hollywood, Palmer isn’t going anywhere for the time being. She has already worked alongside Nicolas Cage in “The Sorcerer’s Apprentice” (dir. Jon Turteltaub) and beside Daniel Radcliffe in “December Boys” (dir. Rod Hardy), and she recently finished filming “I Am Number Four” (dir. D.J. Caruso). With “Take Me Home Tonight,” she can add to her repertoire of co-stars not only Grace, but also Anna Faris, Dan Fogler and Chris Pratt.

“I think it’s like, egotistical that ... [Faris] could be my twin,” Grace said frankly of the actress who plays his twin sister in the film. Mutual respect, he said, was a constant feeling around the movie’s set, even when the cast was scarfing down breakfast after shooting all night—a frequent occurrence, as the crew went nocturnal for around eight weeks to film the movie’s substantial nighttime footage. Grace was effusive about his fellow cast members. “These are going to be the biggest movie stars of five years from now, and I got to see them all together,” he said.

Grace, of course, is no small-time performer himself. He is best known for his role as Eric Forman on “That ’70s Show.” Earning his first producing credit, he came up with the idea for “Take Me Home Tonight” with longtime friend and fellow producer Gordon Kaywin. The two are credited with the story behind Jackie and Jeff Filgo’s screenplay.

Throughout the movie, Grace’s character runs around Los Angeles stealing cars and seeking hard drugs, as well as trying to impress the girl of his dreams. But while inhabiting a character is old hat for Grace, serving as executive producer was an entirely new experience. “I got to spend a lot of time with the director that you just don’t get as an actor,” he said. “I felt like I arrived with a real knowledge of everything about the film.” Adding to the sense of familiarity on set were Jackie and Jeff Filgo, the film’s writers, who met Grace years ago when the three collaborated on “That ’70s Show.” “They really know my voice, and they’re a pleasure to work with,” he said.

While it is never at a loss for comedy, “Take Me Home Tonight” aims to convey more poignant themes as well. When Grace and Palmer pondered the true message of the movie, the conclusion they came to speaks to their personal experience, as well that of many young people today: “It’s tough when structure ends,” Grace said. “Middle school then high school then college—then no more structure. It’s almost weirdly paralyzing that you have so many options.” The moral of the movie according to Grace? “Just roll with it, let go, and it’s okay not to know.”