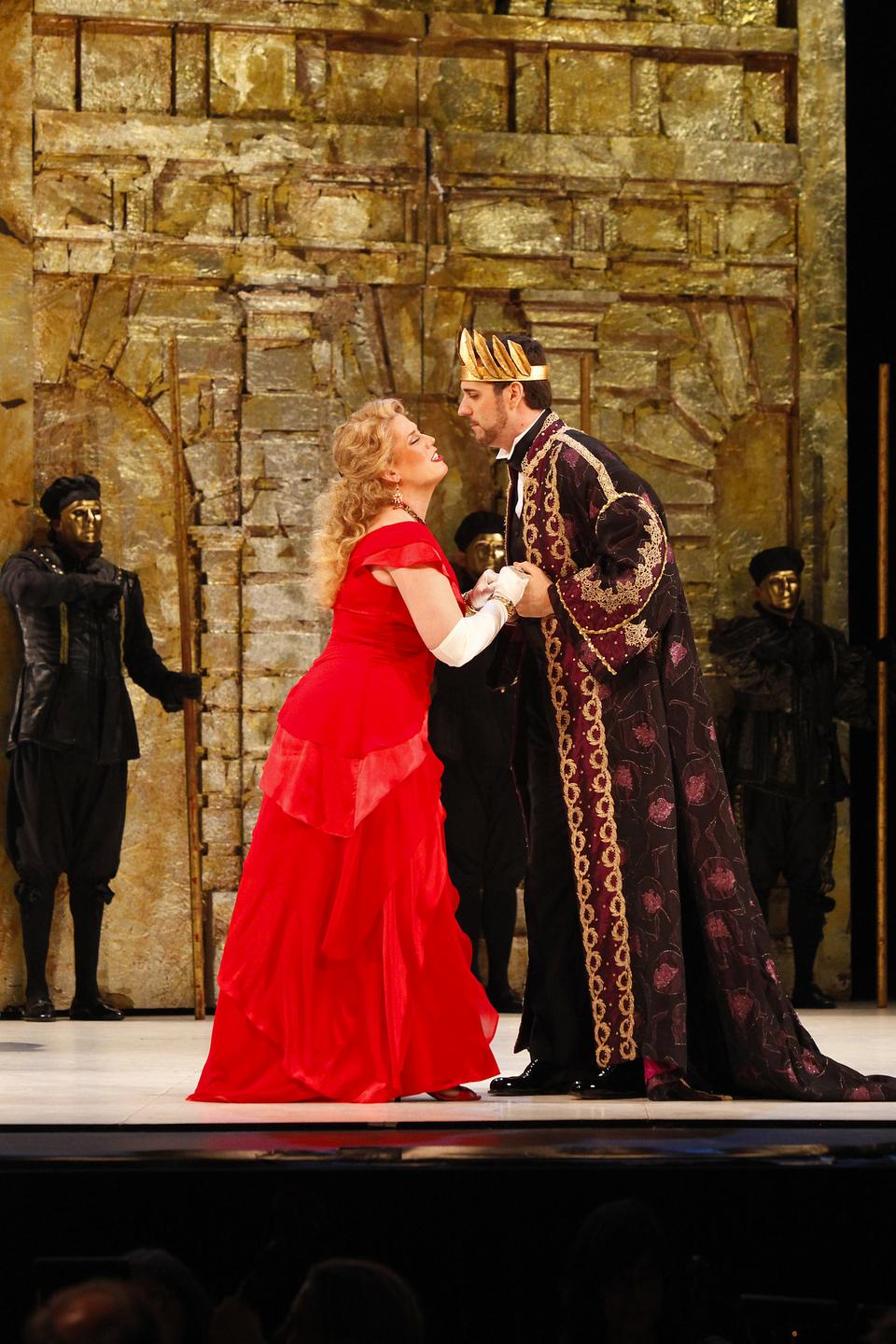 This past weekend, the Boston Lyric Opera concluded its run of “Agrippina,” an Italian opera written by German composer George Friedrich Handel in 1709. A story of romantic and political deceit, the story centers upon Nero’s power-hungry mother Agrippina (Caroline Worra) as she plots her son’s ascent to the Roman throne. This process is complicated, however, by the amorous relationship between the beautiful Poppea (Kathleen Kim) and the oafish emperor Claudio (Christian Van Horn). The difficulties ensuing from Agrippina’s schemes are skillfully relayed with visual richness, delightful humor, and creative staging, offering viewers a brief escape into scandalous ancient Rome.

The set suggests but does not state its location; instead of including any obvious Roman monuments or landmarks, the production evokes the historical mood with visual subtlety. Two tall, shadowy-white set pieces contain the slightest hint of Italian architecture, presenting faintly-etched columns and archways in a manner reminiscent of the artistic technique of bas-relief.

The set’s only main prop is a sizable stone head, a sculptural remnant from antiquity, like an operatic Ozymandias. Yet unlike the forgotten emperor of Percy Bysshe Shelley’s classic poem, the stone head assumes an active role in the production, and functions almost like a silent additional cast member. Throughout the performance, the sculptural head becomes a surface upon which various characters project parts of themselves. In one scene, Poppea wistfully trails a strand of pearls across the marble Roman’s cheek; in another, the oily Claudius carelessly slings his tuxedo jacket across the stone mass while fervently trying to seduce his beloved.

This seduction scene, in which Claudius unsuccessfully attempts to beguile the beautiful Poppea, is one of the funniest and best-choreographed in the entire production. In a highly amusing dance of physical comedy, Claudius slowly snaps his suspenders and gleefully kicks off his dress shoes to reveal expectantly-wiggling toes.

The opera as whole contains many such moments of humor and playfulness. In one lighthearted scene, Poppea and Agrippina, both clad in luxe red and gold bathrobes, share plentiful wine and entirely false affirmations of their friendship. In another, Poppea luxuriates in a large bathtub, singing all of her arias with a delicacy and grace as light as the foamy bubbles that surround her. Throughout the scene, she toys with, loses, regains, and eventually dons a strand of pearls. Given that most of lyrics sung during this scene describe her romantic indecision, the tossed-about pearls seem to be a physical manifestation of her capricious mental state.

As a counterpoint to this whimsy, however, the opera includes the somewhat ominous presence of ghastly imperial guards, who often lurk at the edges of large-ensemble scenes. The guards, whose faces remain hidden behind gold metallic half-masks, silently stalk, stop, and salute with an eerie stiffness that seems to suggest the ever-present and unbending power of imperial Rome. Adding to this sense of political totalitarianism is the huge stone eye which looms above the set in a few key scenes, an almost overstated gesture of Orwellian control. In this way, it is suggested that despite all the scheming and plotting of the city’s manipulative inhabitants, the political order of the Roman state remains both durable and omniscient.

The show’s use of lighting, though creative in some scenes, often proves unoriginal to the point of detriment. Its most skillful application comes during a scene in which a drunken Poppea stumbles home through the Roman night; the delicate light-blue tones of Italian moonlight make her inebriated revelry all the more boorish and pronounced. In several other scenes, however, the lighting does not enhance, but rather dominates the emotional mood. In one particularly trite song, Nero’s solitude and sadness are made blindingly clear by the single spotlight which follows his capitulating movements across the otherwise-darkened stage.

Musically, one of the most arresting numbers is a piece sung by Ottone (Anthony Roth Costanzo), the commander of the Roman army, and yet another of Poppea’s many admirers. Though the lyrics are not particularly creative—“Poppea is asleep/oblivious to my suffering”—and the subject of unrequited love is hardly an original one, the song itself is clear, elegant, and quietly beautiful.

Though “Agrippina” is ostensibly about the power relationships among men, it is clear that women ultimately provide the driving manipulative force in the plot’s action. This careful yet indisputable power balance is reflected even in the show’s costuming; throughout the performance, Agrippina and Poppea wear almost exclusively red, gold, and purple—all colors historically associated with royalty. By contrast, the men are frequently clad in undifferentiated, forgettable tuxes. As they move about the stage, without ever substantively changing the visual tableau, their costumes suggest that their physical positions, like their political ones, are largely interchangeable. And though these ancient political power shifts are perhaps a hazy subject for modern audiences, “Agrippina” offers a visually and aurally delightful glimpse into the tumultuous history of classical Rome.