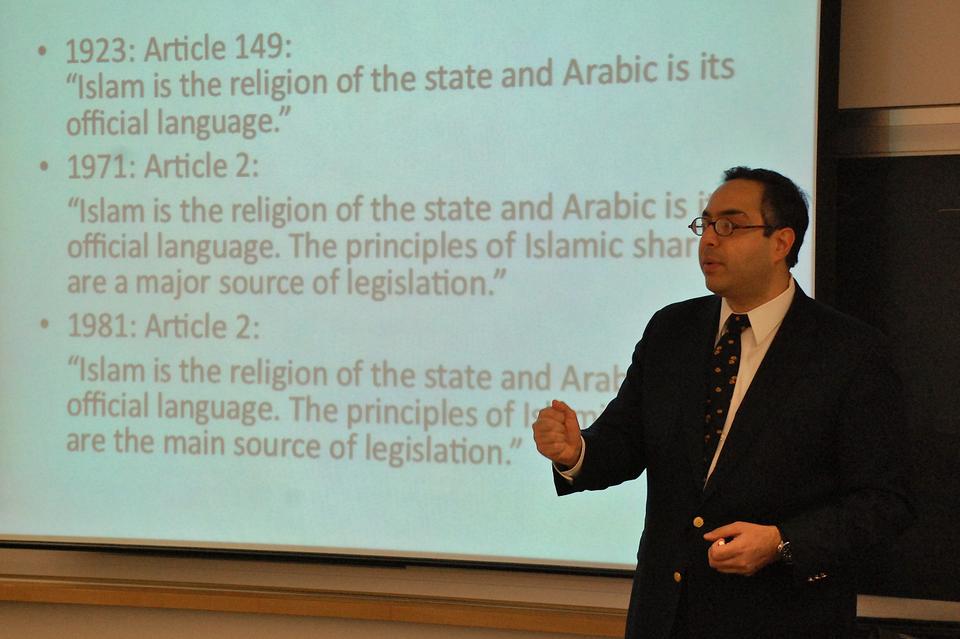 Tarek Masoud, Assistant Professor of Public Policy, Ash Center for Democratic Governance and Innovation, John F. Kennedy School of Government, gives a brief history of the role of Islam and Sharia Law in the Egyptian Constitution, an important issue in upcoming elections, during his presentation in the Bowie-Vernon Room of CGIS on Thursday.
By Joseph E. Glynias, Crimson Staff Writer

Harvard Kennedy School Assistant Professor Tarek Masoud allayed fears that the powerful Muslim Brotherhood will turn Egypt into a Islamist nation, though he warned that there is much that is not known about the situation in the country to predict what will happen in September’s parliamentary elections and the future.

In a seminar jointly sponsored by the Weatherhead Center for International Affairs and the Center for Middle Eastern Studies yesterday, Masoud mainly spoke of the Muslim Brotherhood, said to be the largest and oldest Islamist organization in the world. Founded in 1928 in the northeast Egyptian city of Ismalia, it has among its professed goals “the introduction of the Islamic Shariah as the basis controlling the affairs of state and society.”

Although candidates associated with the Muslim Brotherhood were officially independents ever since the movement was banned in 1954, it was already the second largest party in the legislature before the recent overthrow of Hosni Mubarak and the National Democratic Party.

However, Masoud said that “the Muslim Brotherhood doesn’t represent a majority of the population.”

Still, the Brotherhood will likely have a tremendous political advantage in the upcoming September parliamentary elections, he said. In the relative chaos left by Egypt’s current political vacuum, Masoud said the Islamist organization is uniquely organized because members of the Brotherhood have a high level of commitment, as it takes four years of examination to become an active member.

Further proof of the Muslim Brotherhood’s influential role can be found in the Egyptian people’s recent vote for a series of amendments to the constitution, according to Masoud. These amendments, which were supported by the Brotherhood and opposed by secular forces, include a provision that would destroy the constitution upon the election of the new Parliament.

Masoud did not attribute this outcome solely to the Brotherhood, instead saying that it was a result of a public that needed “certainty.’

Regardless, the parliamentary elections will now be vital in shaping the new Egyptian constitution and, as a result, will bring up polarizing issues like the role of the Shariah in the state.

"A new constitution is job number one of the new parliament,” he said. "By making the constitution writing number one on the agenda, you're ensuring that a religious cleavage would be the most salient political cleavage in the upcoming elections."

Masoud also addressed fears of what could happen because the organization is generally anti-American and anti-Israeli. Masoud said that the Brotherhood would like pursue a more confrontational course with Israel, though the pro-American Egyptian military would potentially serve as a counterweight to such a move and would perhaps take a larger role in governance.

Overall, the message Masoud sent about the Brotherhood’s future in Egypt’s government was one of uncertainty.

This article has been revised to refelct the following correction.

The April 22 article "Masoud Talks Islam in Egypt" misquoted statements made by Professor Tarek Masoud. While Masoud said that tension between Egypt and Israel is likely to increase, the Muslim Brotherhood is unlikely to support an attack on Israel.