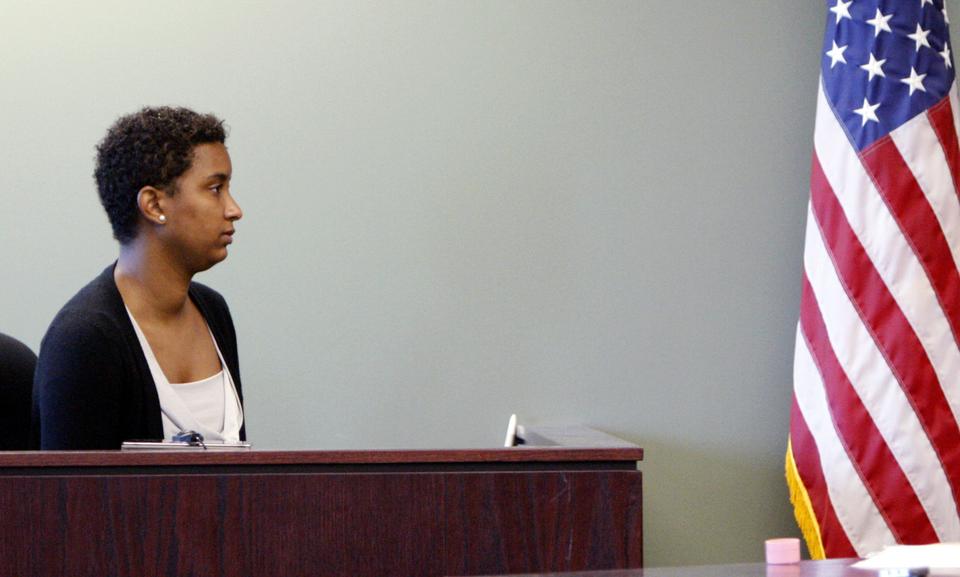 Former Harvard student Brittany J. Smith confirms her guilty plea on Friday for her role in the May 2009 killing of a Cambridge drug dealer Justin Cosby in Kirkland House. Smith was sentenced to three years in prison plus two years of probation.
By Xi Yu, Crimson Staff Writer

WOBURN, Mass.—Former Harvard student Brittany J. Smith pleaded guilty Friday to five of six counts related to her role in the May 2009 killing of a Cambridge drug dealer in Kirkland House. She was promptly sentenced to three years in prison, in addition to two years of probation.

After a two-year legal drama, Friday’s sentencing marks the fourth and last individual to be convicted in connection with the 2009 shooting that resulted in the death of Cambridge resident Justin Cosby, 21. The ruling follows the felony murder conviction of her boyfriend at the time of the shooting, Jabrai Jordan Copney. Smith was convicted of hiding the murder weapon her boyfriend handed her after the shooting and of then lying to investigators about her involvement.

Smith pleaded guilty Friday to accessory after the fact to assault and battery with a dangerous weapon, accessory after the fact to unlawful possession of a firearm, unlawful possession of a firearm, and willfully misleading the police. Smith also pleaded guilty to the charge of willfully misleading the grand jury. Under the terms, Smith acknowledged repeatedly lying to a grand jury but maintains that in several instances she did, in fact, not lie.

In the charge of accessory after the fact to murder, Smith maintained her not guilty plea.

Smith's sentence does not grant her the possibility of parole, and while she is on probation she must seek to maintain employment or attend school.

"By pleading guilty today, Brittany Smith is taking responsibility for her role in the events leading up to, and directly following, the senseless murder of a beloved young man," Middlesex County District Attorney Gerard T. Leone '85 said in a statement.

Smith, the only Harvard affiliate charged in Cosby’s murder, stood in court on Friday with her attorney John P. Osler. Her father and more than 10 family members and friends looked on.

"Your nonchalant and cavalier attitude makes me sick," the victim’s mother, Denise Cosby, said in court. "You were the nucleus of this catastrophe."

Denise Cosby was joined by several members of the victim’s extended family, including Cosby's uncle, who also spoke out in court. Gregory Cosby said that Cosby was "amazing with children" and frequently volunteered and worked with children prior to his death.

"They loved him, and he also loved them," Gregory Cosby said, reading from a statement. "What gave you and your boyfriend the right to plan his murder? I never met you, but words cannot express my anger toward you."

Cosby was studying at Salem State College the semester prior to his death, Denise Cosby said in an interview after Friday's court proceedings. He had just withdrawn for the semester and was planning to return to school that fall, she said.

Denise Cosby said that her son aspired to be a physical education teacher because he thought that the subject would be fun for the kids.

"I couldn't believe as my son passed away right in front of my eyes," she said in court, addressing Smith. "In my opinion, you are just as responsible for my son's death as the shooter."

Friday's hearing came at the conclusion of sentencing negotiations between the prosecution and defense, which had been ongoing since June when Superior Court Justice Diane M. Kottmyer denied the defense's motion to dismiss the charges.

While the defense recommended a sentence of two and a half years, the prosecution asked that Smith be sentenced to five to seven. At three years in prison, the ruling handed down by Superior Court Justice Kathe M. Tuttman splits the difference between the two sentencing recommendations.

Smith’s attorney, Osler, declined to comment on the sentence.

On May 18, 2009, just two weeks before Smith's graduation from Harvard, her boyfriend Copney and two accomplices shot and killed Cosby in the basement of Kirkland’s J entryway.

An aspiring songwriter from New York City who frequently visited Smith and stayed in her room, Copney was convicted of felony murder of the first degree at the conclusion of his trial in April. He was sentenced to life in prison without the possibility of parole.

His accomplices Blayn Jiggetts and Jason F. Aquino pleaded guilty to the lesser charge of manslaughter prior to the start of Copney’s trial in exchange for cooperating with the case against Copney. Aquino was sentenced to 18 to 20 years in prison. A sentencing date has not yet been set for Jiggetts.

A senior in Lowell House at the time, Smith watched Jiggetts load the gun in her room before the men brought Cosby to Kirkland House to arrange the drug rip. Smith gave Copney and his accomplices her Harvard ID to gain access to the Kirkland basement, where Cosby was shot. Cosby later died from a bullet wound to his abdomen.

Upon Copney’s return from Cosby's shooting, Smith hid the gun in her blockmate’s room in a bag under her bed. She then called a taxi to help with the men’s getaway to South Station, where the four boarded a bus to New York. Smith returned to Harvard the next day.

Smith entered into a non-prosecution agreement with the district attorney's office in July 2009, but prosecutors said she later lied to investigators and misled a grand jury, breaking the terms of the agreement. Smith's lawyer disputed that claim and tried to dismiss the case. Kottmeyer denied the defense's motion in June, which resulted in the two sides entering into negotiations for a plea agreement.

Chanequa N. Campbell, another former Harvard student, has also been implicated in the murder and was denied a diploma in 2009, but Smith is the only Harvard student charged for involvement in the murder. Campbell has maintained a non-prosecution agreement with the district attorney's office and has been cooperating in the investigations against the other defendants.