Season Kicks Off With Road Loss, Victory in Home Opener 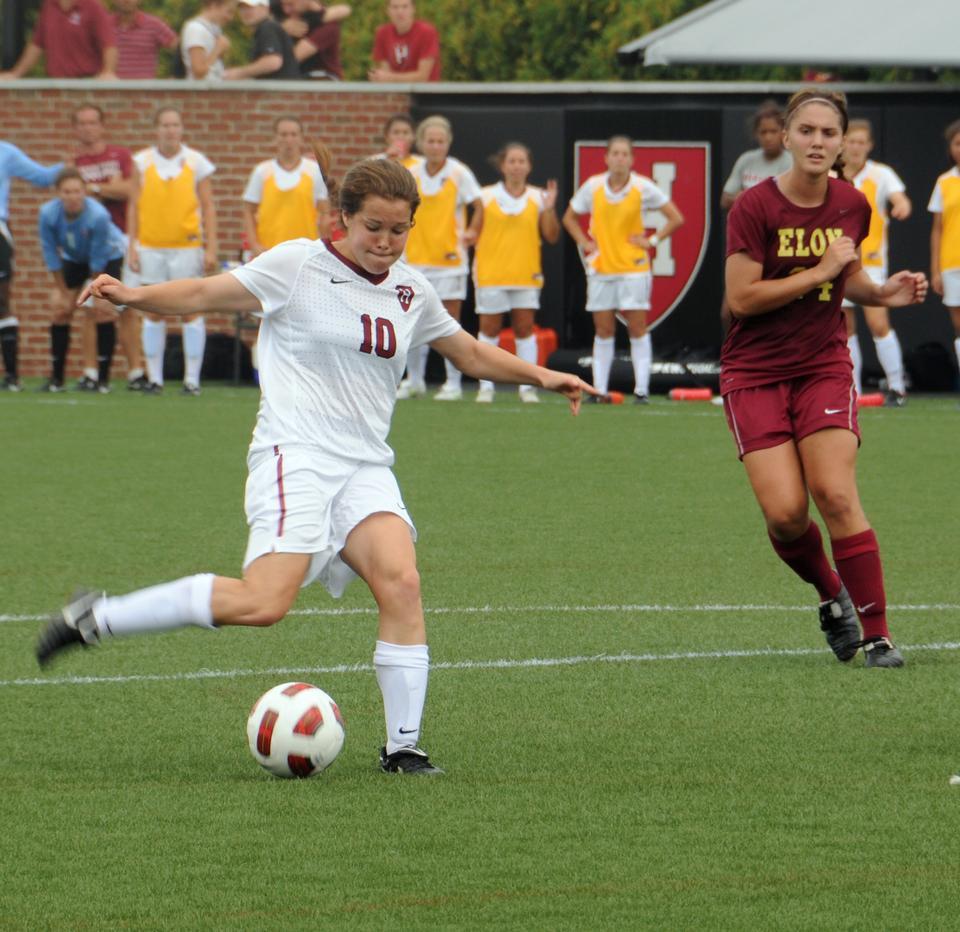 Co-captain Melanie Baskind, who tied for the team lead in scoring last season, totaled three points—including a goal in the 58th minute—in Harvard’s 2-1 win over Elon Sunday afternoon. The victory against the Phoenix evened the Crimson’s record to 1-1 after it fell to Long Island Friday.
By Brian A. Campos and Alex Sopko, Crimson Staff Writers

Hours before the men’s soccer team emerged victorious in a nail-biter over Northeastern, the fans at Soldiers Field Soccer/Lacrosse Stadium witnessed another dramatic win Sunday.

Earlier that afternoon, the Harvard women’s soccer team knocked in the deciding goal with just three minutes left to play, taking down Elon, 2-1.

After dropping a 2-1 decision at Long Island on Friday, the Crimson (1-1) returned to Cambridge determined to win its first home matchup of the season.

Against the Phoenix, Harvard dominated possession and had the clearest chances of the game, but it took until the second half for the Crimson to break a scoreless deadlock.

Co-captain Melanie Baskind scored off a through ball from freshman Meg Casscells-Hamby 11 minutes into the half, but Phoenix midfielder Kimmie Krauss responded in the 83rd minute with a goal to tie the game. The comeback was quickly quelled four minutes later when sophomore Elizabeth Weisman put away a rebound to give the Crimson the win.

The Crimson found its rhythm and set the contest’s offensive tempo early in the game.

Harvard’s first chance came in the 14th minute when sophomore Alexandra Conigliaro connected with a cross from the right flank only to see her header fly high over an open net.

A minute later, Baskind created enough space from the right to test Elon goaltender Shannon Cosgrove with a shot on goal. The senior led the attack with 10 shots, six of which were on target.

“We ended up in the negative result on Friday, so [Baskind] had to reach deep down today,” Leone said. “She showed great leadership and poise, and she had a really great performance for us.”

The veteran had plenty of help coming from rookie Casscells-Hamby, who was critical in the setup of the game’s first goal. Halfway through the first half, the freshman cut through the middle of the field to send a powerful shot from outside the box to trouble Cosgrove. Casscells-Hamby was second on the team in attempted shots with four.

The Crimson continued attacking the Phoenix goal, creating another opportunity with three minutes left in the first half. A long throw-in from junior Aisha Price led to a scramble in the box, and the Elon defenders failed to clear the ball. Freshman Kate Makaroff ended up with an open shot on goal that she could not put away.

“The freshmen did great stepping up to fill in the holes,” Baskind said. “We definitely have some holes from the graduating class last year, so I think everyone is doing really well coming off the bench.”

Another key performance came from rookie defender Lauren Urke, who took on a more offensive role in the second half.

The freshman demonstrated confidence by dribbling down the right flank several times to get a couple of shots off and cross the ball into the box.

“The kid wants to win,” Leone said. “She saw her moment and she went for it. That’s it; the timing was right.”

With 32:52 left in the second period, Casscells-Hamby slipped a through ball to Baskind, who did not hesitate to put the ball in the right back corner of the net.

A similar play put Elon on the scoreboard. Krauss received a well-timed pass from Catherine Brinkman and imitated Baskind in sending a low shot past rookie goaltender Bethany Kanten with 7:54 left to play.

Baskind responded right away, dribbling the ball straight at the Elon defense and mustering a shot on goal. Another attempt by Baskind with 3:29 on the clock was too strong for the goaltender to wrap up, and Weisman took advantage of the deflected shot to give Harvard the victory.

The Crimson’s close win came after an equally close loss against Long Island University on Friday.

“It was a great game, played really fast,” Leone said. “The only bad part about the game was the result. We really played hard; so did LIU. They just got two goals, and we got one.”

LIU scored first on Jen Spicer’s shot in the 27th minute that got past junior goalkeeper AJ Millet, who made her first appearance for Harvard since a season-ending injury last year.

The Blackbirds continued to hold onto a one-goal lead until the middle of the second half when Crimson sophomore Peyton Johnson slammed a pass from Casscells-Hamby into the net. The rookie recorded a game-high five attempted shots in addition to the assist.

“[LIU] was a big physical team, but we were able to possess and really play our game,” co-captain Lindsey Kowal said. “It’s a great indication of where our season is going to end up.”

But while Harvard recorded seven more shots on goal than the Blackbirds in the second half, LIU notched the win thanks to junior Ruby Leon’s accuracy against Kanten.

“It’s always hard playing as a fall start,” Baskind said. “We don’t know each other yet, meeting people, trying to make things happen on the field, but it’s going pretty smoothly. We’re creating a ton of chances, which is really nice for this early in the season. We’re getting there—we just need to put the ball in the back of the goal.”

—Staff writer Alex Sopko can be reached at bcampos@fas.harvard.edu.