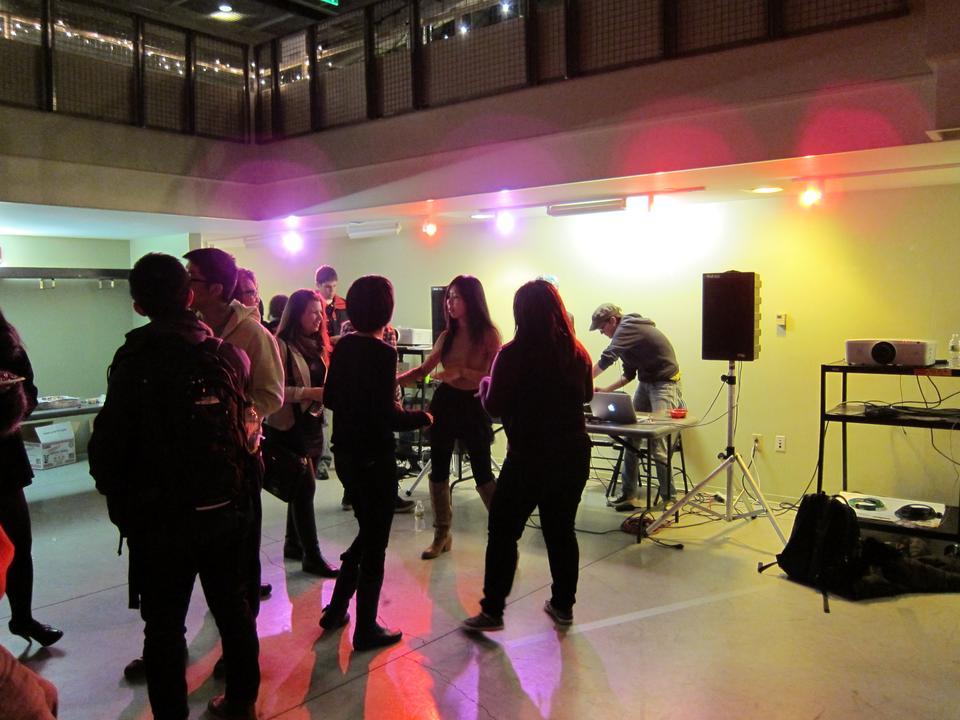 The Arts @ 29 Garden January Arts Intensives, a workshop offered during Wintersession, wrapped up with a celebration DJ’ed by the ‘Learn to DJ’ intensive students.
By Petey E. Menz, Crimson Staff Writer

A week before filmmaker Thorsten Trimpop traveled to Japan to shoot a documentary on last year’s earthquake, he was giving careful consideration to footage Oliver Luo ’13 had shot of his feet as he walked from the quad to the Carpenter Center. Luo’s 18-minute journey passed over a variety of different terrains. “To have this quality of different grounds you’re walking on, to go from this brick ground to something else...it’s really interesting,” Trimpop said of the video.

Trimpop’s film course was one of the six different January Arts Intensives offered at Harvard’s Arts @ 29 Garden center during Wintersession. Luo, like other students in the intensive, had shot his footage on a cell phone rather than with a traditional camera. “The basic idea was to use something we always have in our pockets, but now we are using it to make art. That’s a goal,” Trimpop said.

“We heard that there was a sort of interest in a way to learn a little bit more about the way technology is affecting the arts and changing the way we make art,” said Bess Paupeck, the program manager for Arts @ 29 Garden. “We’re trying to answer that call with this group of intensives that touch on the way technology is coming into play in a variety of settings within the arts.” In these intensives, students’ work suggested that the digital age’s most significant impact on the arts was allowing the creator to access and manipulate a wide range of source material.

This was clearest during the final presentations on Jan. 20, when students from the six different intensives displayed their work. “We are all speaking the language of remix,” instructor Sarah E. Hankins said during these presentations. “Remix” was an appropriate description for an event that included theater students writing monologues inspired by characters in YouTube videos, beginning DJs mashing up everything from dubstep to Swahili pop music, and participants in the performance art intensive staging works based on poetry.

Hankins is no stranger to mixing herself—she meshes roles as a Harvard graduate student in ethnomusicology, a professional club DJ known as DJ Super Squirrel, and instructor for the music intensive, which taught students the fundamentals of DJ mixing. Like the other fields covered by the intensives, DJ mixing has been thoroughly affected by the digital age. Though Hankins did teach her students how to use  turntables— “It’s very important to learn these if you want to DJ,” she said—she uses the program Ableton Live in her work and praises its power in remixing and synthesizing disparate sources. “If you were a turntable DJ in 1985, you had two turntables and two hands. If you have Ableton Live, it’s sort of like you have infinite hands,” Hankins said.

Yet remixing—or, more generally, creatively interpreting preexisting material—isn’t the only way artists can gain from having access to broad digital resources. Scott Zigler, the director of the A.R.T. Institute for Advanced Theater Training and the instructor of the theater intensive, explained to students like Selina Y. Wang ’15 how digital media can be valuable for actors seeking reference material. “Right now he’s putting on a play about crystal meth users, and now you can just go on YouTube and see how people act on crystal meth,” Wang said. “He’s mixing method acting with technology,” added Lelaina E. Vogel ’15, another theater intensive student.

As students explored different ways to use these resources, their activity invigorated the space at Arts @ 29 Garden. It is a peculiar building; its linoleum tiles suggest a high school, while the stark concrete ceilings and glass walls evoke a downtown gallery. That strange combination, fitting for the theme of the intensives, was one of many present during the session; at any given moment, a visiting observer might hear students remixing a song by rapper Killah Priest while others tried to find the perfect spot for a performance art piece and still others listened to a recording of poet Amiri Baraka reading his elegy for John Coltrane. Due to the glass walls of the classrooms, it was easy for a visitor to look in on these moments of creative expression.

“It kind of reminds me of Alfred Hitchcock’s ‘Rear Window.’ You’re getting little glimpses into people’s lives,” said online media intensive instructor Joseph L. Bergen when he showed his students “Out My Window,” an interactive documentary produced by the National Film Board of Canada. The work compiles videos, photos, and voice-overs detailing the lives of people who live in high-rises around the globe; Bergen showed it, with numerous other online documentaries, to get his students to think about techniques used online to create a sense of identity.

Bergen’s comparison to “Rear Window” is apt; there is a voyeuristic appeal to these intimate snapshots of private life.  But as a student said of “One Millionth Tower,” another National Film Board of Canada production about high-rises, these works also convey the vibrancy of a place. Like Neil Simon’s “California Suite” or Georges Perec’s “Life: A User’s Manual,” these are works that derive their power from the collective weight of overlapping stories and insights.

As Killah Priest boomed next door to Bergen’s lecture, it seemed entirely possible that the comfortably noisy environment of Arts @ 29 Garden during the intensives might have served as sufficient source material for a similar work.

—Staff writer Petey E. Menz can be reached at menz@college.harvard.edu.