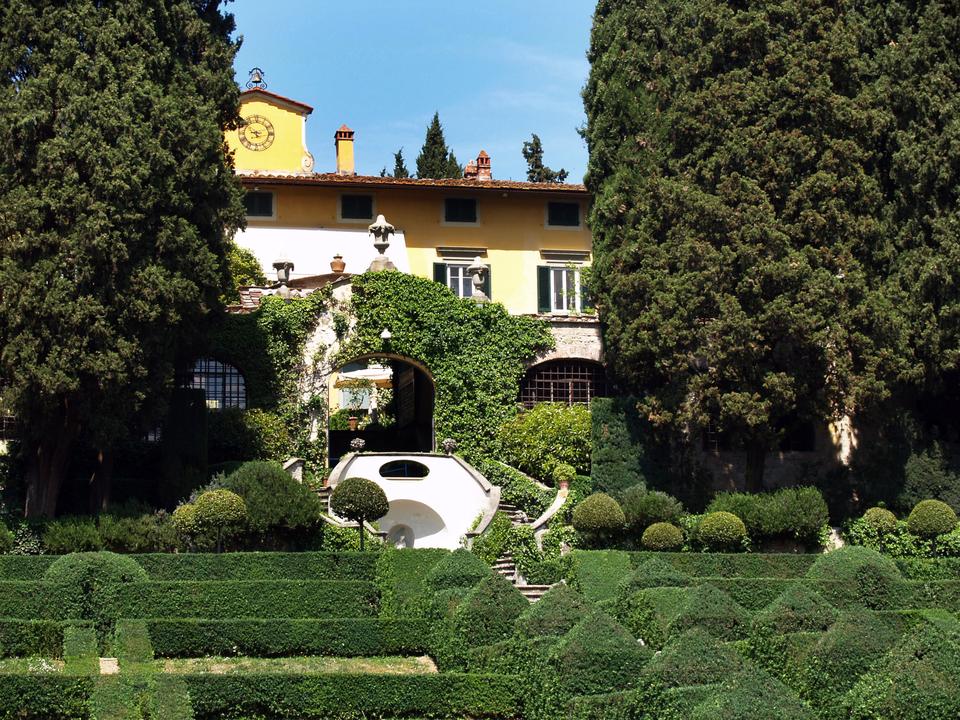 Villa I Tatti is seen behind the limonaia with the Italian garden in the foreground.
By Michael C. George and Alyza J. Sebenius, Crimson Staff Writers

This fall, four thousand miles away from the hubbub of Cambridge—removed from the Occupy movement, library cutbacks, and heated debates over the return of ROTC—scholars at Harvard’s center in Italy harvested grapes.

At Villa i Tatti, Harvard’s center for Italian Renaissance studies, a group of research fellows take part each fall in a harvest festival called the vendemmia, one of I Tatti’s many traditions that preserve the culture and the spirit of the Renaissance.

In a time of continual change in the Harvard community, I Tatti serves as a living time capsule, upholding the vision and traditions of its founder, renowned art critic Bernard Berenson, Class of 1887.

Nearly five decades after Berenson’s death, Villa i Tatti remains a bustling hive of intellectual activity and a haven for scholars to rediscover the Renaissance in the modern world.

When Berenson died in 1959, Harvard University became heir to an impressive art collection and one of the largest private libraries in the world. His Villa i Tatti, in the rustic Settignano foothills east of Florence, has since become a refuge for scholars and artists.

Former musician-in-residence Christopher Stembridge recalls his days at I Tatti with fondness: studying Frescobaldi in the library, walking a few minutes to Berenson’s study, and sitting down to play the harpsichord in the presence of original Giotto paintings.

Every day, readers and scholars enjoy conversation over morning coffee with olive-oil doused schiacciata Tuscan flatbread. Midday they gather to enjoy wine and a three course lunch in the dining room.

“We come together in fellowship around food and wine,” says Elizabeth W. Mellyn, who has studied at I Tatti.

Fellows and administrators are rightly proud of the wine and high-grade extra virgin oil served at meals, as both are from I Tatti’s own vineyards and olive groves. In a speech during I Tatti’s 50th Anniversary Celebration last year, professor Lino Pertile, director of I Tatti and former Eliot House master, noted that their olive oil has won prizes in local fairs and the wine “has now reached a quality that would definitely impress Mr. Berenson and his guests.”

While it may seem odd to some that the University owns a property that produces Harvard-label wine, the consensus of those at Villa i Tatti is that its production is a part of their broader efforts to celebrate Italian culture and to encourage the cross-culture and to encourage the cross-pollination of ideas and personal interactions among the scholars, students, and guests.

“It’s a monastery for lay-people, in a way—with all the best aspects. That’s how Berenson envisioned it. You meet together for meals, and then you go to your little cells to focus,” says Michael T. Tworek, a teaching fellow in history who spent time as a visiting graduate fellow at I Tatti.

Pertile, a native of Italy and a professor of romance languages and literatures, likened the small I Tatti community to Eliot House, where he served as House master until 2010. Pertile relates with a chuckle an incident when he accidentally welcomed a group of dignitaries to I Tatti by saying “welcome all of you to Villa—Eliot House!”

But the marvels of I Tatti do not come cheap. Although an arm of Harvard University, I Tatti is an autonomous and financially independent allied institution that must raise its own capital to fund projects.

The Villa is supported primarily by its own endowment, which has grown from the original $900,000 that Berenson bequeathed with his estate. To bridge the gap between endowment income and operating expenses, the operation of Villa i Tatti relies solely upon donations.

“While Harvard manages the endowment of I Tatti, it does not directly contribute to it,” says former Director of I Tatti Joseph Connors, who is also a professor of history of art and architecture.

“It’s not like what we spend at Villa I Tatti is taken away from Harvard Yard,” Pertile says.

During the financial crisis, Harvard University’s endowment plummeted by nearly 30 percent, leading to the slashing of budgets across the University and also dozens of employee layoffs. I Tatti’s endowment has also suffered, proving that the Italian sanctuary was not immune from the turbulence of global financial markets.

At an I Tatti Council meeting in April 2008, Connors expressed concern about the impact of the weakening dollar on I Tatti’s budget. According to a fall 2008 newsletter, Connors says that he worried that Renaissance study may be jeopardized by financial strain and reaffirmed I Tatti’s obligation to safeguard and preserve scholarship during difficult economic times.

“In general, this was a time of considerable constraint in all areas of operation,” Connors writes in an email to The Crimson.

As examples of budget cuts, he cited reduced hiring, program cutting, and the freezing of fellowship levels despite the unfavorably high Italian inflation rate.

Despite these concerns, I Tatti weathered the crisis and managed to preserve its way of life, proceeding with ambitious building projects and plans for expansion of its programming. In 2007, the Center announced plans to renovate its library and managed to raise $1 million by 2009 to complete extensive renovations. In 2008 and 2009, the Center expanded its grounds, which included the addition of a new vineyard, a new greenhouse and olive grove, according to its fall 2009 newsletter. I Tatti has also continued to focus on restoring its historic gardens, Assistant Director Allen J. Grieco, writes in an email to the Crimson.

In addition, I Tatti recently inaugurated a new building, housing study rooms for their fellows and a lecture hall, built during the height of the crisis. Although the building project was delayed when the construction company went bankrupt, it was eventually completed in 2011 after the Harvard Corporation granted permission for continued development given that funding had been previously obtained.

“I Tatti got through,” writes Connors, “though the watchword in budgetary matters is still caution.”

THE HEART OF THE VILLA

Villa i Tatti has focused on bringing its research and study into the 21st century, while keeping one foot firmly rooted in Renaissance.

A world class research center, it adds 3,500 volumes annually to its library of 175,000, a collection renowned throughout Italy. I Tatti has also continued to augment its research opportunities, adding programs that benefit Harvard students such as a Visiting Graduate Fellowship program, and a Summer Undergraduate Internship program that was created last year.

In recent years, I Tatti has expanded its academic focus beyond art history to include architecture, literature, music, religion, and science. The subjects of its scholars now include the transmission of Renaissance ideas beyond the Italian Peninsula.

“Interdisciplinary is the buzzword today. I Tatti is a place where you actually live it,” he says.

I Tatti has similarly sought to increase the geographical representation of its Fellows. Until the mid-1990s, half of the fellows were from North America, with another quarter from Italy. Today, that sum is just 40 percent. Villa i Tatti is committed to “reaching beyond the traditional boundaries of our center,” says Pertile, who will travel to China, Japan and Mexico next year in an effort to promote I Tatti in the far corners of the globe.

“The time has come to make ourselves available to the world,” he says.

Despite its efforts to become a more globally-focused institution, at its core, I Tatti is committed to preserving the vision and lifestyle of Berenson from nearly a century ago.

Berenson’s grave lies next to a small 18th century chapel just outside I Tatti, but his legacy and spirit are alive and well at the Villa, which celebrated its fiftieth anniversary last June in a grand celebration with some 300 guests. “He had a vision to hand Villa i Tatti down beyond his own life to scores of young people who would be able to enjoy it and take advantage of it in the way he did before,” says Pertile. “Everything still speaks of him.”

—Staff writer Michael C. George can be reached at mgeorge@college.harvard.edu.