Harbach on Inspiration, Writing, and ‘Dudes’ 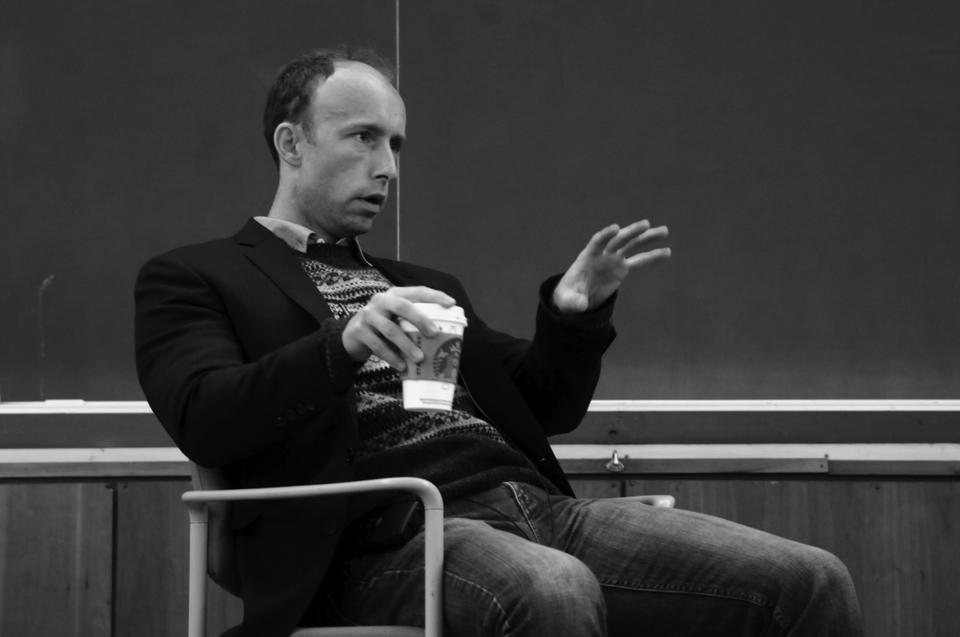 Author, editor, and Harvard alumnus Chad D. Harbach ’97 wrote his debut novel, “The Art of Fielding,” about a talented baseball player at a Division III school. He develops a psychological block preventing him from playing, but as Harbach noted in his talk at Yenching Auditorium last Monday, however, “It’s not all about baseball.” This pronouncement turned out to be an apt forecast of the rest of the talk, which was organized by Benjamin T. Hand ’12 of the Mahindra Humanities Center’s Undergraduate Committee and moderated by Madeleine M. Schwartz ’12 and Mark J. Chiusano ’12, both Crimson editors. Topics during the talk ranged from sports culture to the writing process to the joys of Melville and the influence of great books. During the hour-long event, Harbach spoke with humor and surprising candor, given his recent rise to fame.

“Most sports novels are pretty bad,” Harbach said, before explaining why he chose to make his first book about sports—and stick with it through the 11-year writing process. He acknowledged the similarities between the block his character faced and the struggles of a writer: “If you are a writer, you are going through this sort of thing every day, but in baseball it happens in this very public way. You can see the player’s thought process laid bare.” This is just one of the similarities between athletes and artists, according to Harbach. “I went about the book thinking of good athletes as artists,” he said. “In a way I think that sports have become a preeminent art in our culture.”

Harbach is not only a novelist, but also an editor and writer at the literary magazine n+1, which he helped found in 2004 alongside a crop of other Harvard graduates. He writes about topics that range from sports gossip to politics in the magazine and has recently developed a writing interest in ecology and climate change. This apparent flexibility is an important reason why “The Art of Fielding” traverses more ground than just baseball. “If you are writing only about what happens in the game,” he said, “then that is just sports porn.” He wanted the novel to examine richer material than the playing field alone. “There is a whole spectrum of possible relationships between [the characters], from antagonistic and competitive relations to profound friendship to sexual relations. So the book is about how you move across this spectrum.”

Hand characterized Harbach’s book as “a great American novel about baseball and about life in America.” During the discussion, the book drew comparison to “Moby Dick,” whose author, Herman Melville, was an inspiration for the protagonist of “The Art of Fielding.” Harbach first encountered Melville in a seminar he took as an undergraduate. According to Harbach, “Moby Dick” guided “The Art of Fielding” through its singular focus on the relationship between “dudes.” Harbach attempted to pay homage to the influence and themes of Melville but took his writing down a different route, as well. “Moby Dick is the quintessential American novel, but in the book I make it comic in a certain way,” Harbach said. “You do not want to write a story and be constantly reminding people there is a better story they could be reading.”

Harbach also shed light on the process of becoming a writer after college, a topic that, based on the questions asked during the talk, was of great interest for much of the audience. “I never took a writing class when I was here,” he said. “Writing fiction just seemed like something no one could tell me that I could not do.” Nevertheless, it was not an easy process: “Very early on I had to teach myself how to write a book,” he said. “When I was an undergrad, I was not writing fiction. I felt overwhelmed enough by classes. There were maybe two writing workshops, and I felt like they were for people of a much loftier literary status than me.” This was one of the key points of the talk, said Hand: “It was a good lesson for those who might be interested in writing but do not feel that they have had the proper instruction here. He showed it is something you can pursue even if you were not comfortable doing it as an undergraduate.”

Chiusano mentioned that there is a planned HBO series based on the book. “It is interesting that it would not be a movie, that it would be a part of this new trend,” he said. Harbach sheepishly expressed a lack of knowledge about TV shows but pointed out the similarities between long novels and a series: “What has always appealed to me about the novel is that you spend a lot of hours reading this book and you have this durable experience. I think TV can replicate parts of that which a movie cannot.” He hasn’t visualized much beyond the first steps of the series, however; when asked who his dream cast would include, Harbach laughed and invited the audience to make suggestions.

Harbach’s talk remained consistently engaging because he let the discussion reflect his own life, in which many things are important and nothing is overwhelmingly paramount. Though his novel is about baseball and he admitted to feeling guilty about the amount of time he devotes to sports fandom, he also discussed the pros and cons of the fact that many writers in the last century have been educated by or have taught in a Master of Fine Arts program. He made it clear that baseball was one of his projects but not his entire interest. Through his opinionated humor and animated advice, Harbach proved that, in artistic wealth, it pays to be a polymath.