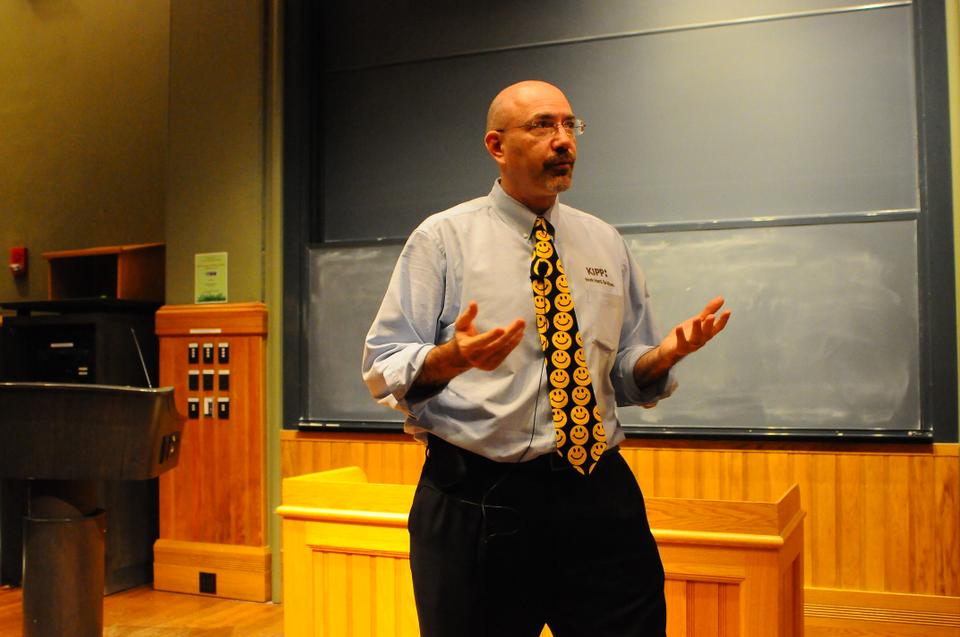 Michael Feinberg who established a network of charter schools called the Knowledge is Power Program reflects on his experiences in Sever Hall Monday night. Feinberg engaged with the audience through thought experiments.
By Irfan Mahmud, Contributing Writer

Dozens of students gathered in Sever Hall Monday night to hear education reformer Mike Feinberg tell the story of how he came to start the nation-wide network of charter schools known as the Knowledge is Power Program.

Starting the event with a thought experiment, Feinberg asked audience members to imagine a well-endowed private school and a large, under-resourced public school and to then consider what expectations society might have for the students attending each institution.

The charter school, Feinberg said, acts as a middle ground between these two, providing a high-quality education to children who may not have access to more elite private and public high schools.

“Charter schools are one more way to deliver education,” he said.

After spending three years teaching fifth-grade students in Houston through Teach for America, Feinberg founded his first KIPP school in that city. Feinberg said that during his experience with TFA, he felt that his students lacked the adequate academic setting to grow intellectually—something he hoped to provide with his new charter school.

Monday’s lecture, which was presented by the Harvard College Education Society, was attended by Harvard students who said they came to learn more about the type of education reform championed by KIPP.

“I’ve heard a lot about the benefits and drawbacks of KIPP,” said attendee Bernadette N. Lim ’16. “This event demystified a lot of that for me.”

Others who attended the event said it was an opportunity for them to further their interests in urban education reform.

“I came to this talk to because I thought it would complement my spring break service trip, where we looked at urban education and policy reform in Washington, D.C.” said attendee Tianhao He ’15, who participated in PBHA’s alternative spring break program.

Feinberg, who has received various honors for his work, including an honorary degree from Yale University and the Presidential Citizen’s Medal, believes the premise of KIPP is simple.

“There are no shortcuts,” he said.

Feinberg concluded his talk with another thought experiment, asking the audience to decide which of two classrooms they would send their children to: one with cutting-edge technology and equipment or a classroom without the glitzy gadgets but with a phenomenal teacher.

“We often forget as a group the most important resource of all—the human resource,” said Feinberg.